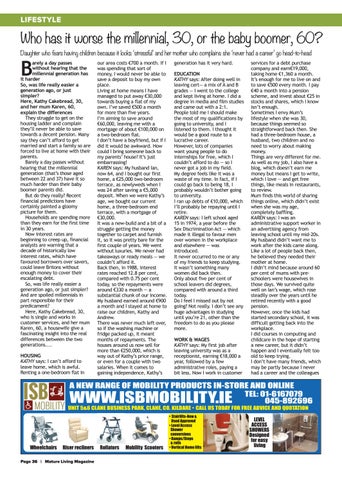 Who has it worse the millennial, 30, or the baby boomer, 60? Daughter who fears having children because it looks ‘stressful’ and her mother who complains she ‘never had a career’ go head-to-head

our area costs €700 a month. If I was spending that sort of money, I would never be able to save a deposit to buy my own place. Living at home means I have managed to put away €30,000 towards buying a flat of my own. I’ve saved €500 a month for more than five years. I’m aiming to save around €60,000, leaving me with a mortgage of about €100,000 on a two-bedroom flat. I don’t have a boyfriend, but if I did it would be awkward. How could I bring someone back to my parents’ house? It’s just embarrassing! KAREN says: My husband Ian, now 64, and I bought our first home, a €25,000 two-bedroom terrace, as newlyweds when I was 24 after saving a €5,000 deposit. When we were Kathy’s age, we bought our current home, a three-bedroom end terrace, with a mortgage of €30,000. It was a new-build and a bit of a struggle getting the money together to carpet and furnish it, so it was pretty bare for the first couple of years. We went without luxuries. We never had takeaways or ready meals — we couldn’t afford it. Back then, in 1988, interest rates reached 12.8 per cent, compared with 0.75 per cent today, so the repayments were around €330 a month — a substantial chunk of our income. My husband earned around €900 a month and I stayed at home to raise our children, Kathy and Andrew. There was never much left over, so if the washing machine or fridge packed up, it meant months of repayments. The houses around us now sell for more than €250,000, which is way out of Kathy’s price range, or even for a couple with two salaries. When it comes to gaining independence, Kathy’s

generation has it very hard. EDUCATION KATHY says: After doing well in leaving cert— a mix of A and B grades — I went to the college and kept living at home. I did a degree in media and film studies and came out with a 2:1. People told me I should make the most of my qualifications by going to university, and I listened to them. I thought it would be a good route to a lucrative career. However, lots of companies want young people to do internships for free, which I couldn’t afford to do — so I never got a job in my field. My degree feels like it was a waste of my time. In fact, if I could go back to being 18, I probably wouldn’t bother going to university. I ran up debts of €10,000, which I’ll probably be repaying until I retire. KAREN says: I left school aged 15 in 1974, a year before the Sex Discrimination Act — which made it illegal to favour men over women in the workplace and elsewhere — was introduced. It never occurred to me or any of my friends to keep studying. It wasn’t something many women did back then. Only about five per cent of school leavers did degrees, compared with around a third today. Do I feel I missed out by not going? Not really. I don’t see any huge advantages in studying until you’re 21, other than the freedom to do as you please more. WORK &amp; WAGES KATHY says: My first job after leaving university was as a receptionist, earning €18,000 a year, followed by a few administrative roles, paying a bit less. Now I work in customer

services for a debt purchase company and earn€19,000, taking home €1,360 a month. It’s enough for me to live on and to save €500 every month. I pay €40 a month into a pension scheme, and invest about €25 in stocks and shares, which I know isn’t enough. Sometimes I envy Mum’s lifestyle when she was 30, because things seemed so straightforward back then. She had a three-bedroom house, a husband, two children and no need to worry about making money. Things are very different for me. As well as my job, I also have a blog, which doesn’t earn me money but means I get to write, which I love — and get free things, like meals in restaurants, to review. Mum finds this world of sharing things online, which didn’t exist when she was my age, completely baffling. KAREN says: I was an administrative support worker in an advertising agency from leaving school until my mid-20s. My husband didn’t want me to work after the kids came along. Like a lot of people back then, he believed they needed their mother at home. I didn’t mind because around 60 per cent of mums with preschoolers were housewives in those days. We survived quite well on Ian’s wage, which rose steadily over the years until he retired recently with a good pension. However, once the kids had started secondary school, it was difficult getting back into the workplace. I did courses in computing and childcare in the hope of starting a new career, but it didn’t happen and I eventually felt too old to keep trying. I don’t have many friends, which may be partly because I never had a career and the colleagues