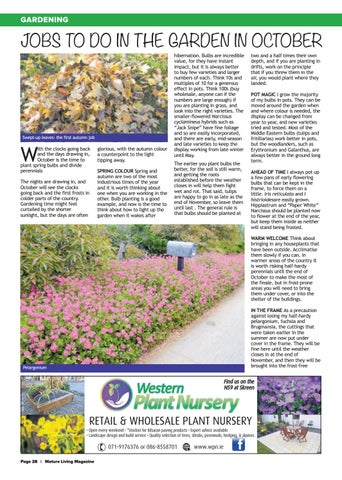 Jobs to do in the garden in october

glorious, with the autumn colour a counterpoint to the light tipping away. SPRING COLOUR Spring and autumn are two of the most industrious times of the year and it is worth thinking about one when you are working in the other. Bulb planting is a good example, and now is the time to think about how to light up the garden when it wakes after

hibernation. Bulbs are incredible value, for they have instant impact, but it is always better to buy few varieties and larger numbers of each. Think 10s and multiples of 10 for a generous effect in pots. Think 100s (buy wholesale, anyone can if the numbers are large enough) if you are planting in grass, and look into the right varieties. The smaller-flowered Narcissus cyclamineus hybrids such as “Jack Snipe” have fine foliage and so are easily incorporated, and there are early, mid-season and late varieties to keep the display working from late winter until May. The earlier you plant bulbs the better, for the soil is still warm, and getting the roots established before the weather closes in will help them fight wet and rot. That said, tulips are happy to go in as late as the end of November, so leave them until last . The general rule is that bulbs should be planted at

two and a half times their own depth, and if you are planting in drifts, work on the principle that if you threw them in the air, you would plant where they landed. POT MAGIC I grow the majority of my bulbs in pots. They can be moved around the garden when and where colour is needed, the display can be changed from year to year, and new varieties tried and tested. Most of the Middle Eastern bulbs (tulips and fritillarias) work better in pots, but the woodlanders, such as Erythronium and Galanthus, are always better in the ground long term. AHEAD OF TIME I always pot up a few pans of early flowering bulbs that can be kept in the frame, to force them on a little. Iris reticulata and I histrioidesare easily grown. Hippiastrum and “Paper White” Narcissus should be planted now to flower at the end of the year, but keep them inside as neither will stand being frosted. WARM WELCOME Think about bringing in any houseplants that have been outside. Acclimatise them slowly if you can. In warmer areas of the country it is worth risking half-hardy perennials until the end of October to make the most of the finale, but in frost-prone areas you will need to bring them under cover, or into the shelter of the buildings. IN THE FRAME As a precaution against losing my half-hardy pelargonium, fuchsia and Brugmansia, the cuttings that were taken earlier in the summer are now put under cover in the frame. They will be fine here until the weather closes in at the end of November, and then they will be brought into the frost-free

Find us on the N59 at Skreen