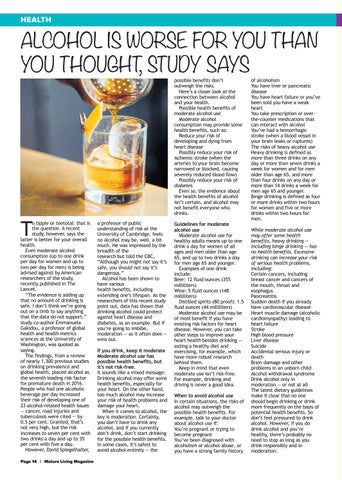 o tipple or teetotal: that is the question. A recent study, however, says the latter is better for your overall health. Even moderate alcohol consumption (up to one drink per day for women and up to two per day for men) is being advised against by American researchers of the study, recently published in The Lancet. “The evidence is adding up that no amount of drinking is safe. I don’t think we’re going out on a limb to say anything that the data do not support,” study co-author Emmanuela Gakidou, a professor of global health and health metrics sciences at the University of Washington, was quoted as saying. The findings, from a review of nearly 1,300 previous studies on drinking prevalence and global health, placed alcohol as the seventh leading risk factor for premature death in 2016. People who had one alcoholic beverage per day increased their risk of developing one of 23 alcohol-related health issues — cancer, road injuries and tuberculosis were cited — by 0.5 per cent. Granted, that’s not very high, but the risk increases to seven per cent with two drinks a day and up to 35 per cent with five a day. However, David Spiegelhalter, Page 14 | Mature Living Magazine

a professor of public understanding of risk at the University of Cambridge, feels no alcohol may be, well, a bit much. He was impressed by the breadth of the research but told the CBC, “Although you might not say it’s safe, you should not say it’s dangerous.” Alcohol has been shown to have various health benefits, including extending one’s lifespan. As the researchers of this recent study point out, data has shown that drinking alcohol could protect against heart disease and diabetes, as an example. But if you’re going to imbibe, moderation — as it often does — wins out. If you drink, keep it moderate Moderate alcohol use has possible health benefits, but it’s not risk-free. It sounds like a mixed message: Drinking alcohol may offer some health benefits, especially for your heart. On the other hand, too much alcohol may increase your risk of health problems and damage your heart. When it comes to alcohol, the key is moderation. Certainly, you don’t have to drink any alcohol, and if you currently don’t drink, don’t start drinking for the possible health benefits. In some cases, it’s safest to avoid alcohol entirely — the

Guidelines for moderate alcohol use Moderate alcohol use for healthy adults means up to one drink a day for women of all ages and men older than age 65, and up to two drinks a day for men age 65 and younger. Examples of one drink include: Beer: 12 fluid ounces (355 milliliters) Wine: 5 fluid ounces (148 milliliters) Distilled spirits (80 proof): 1.5 fluid ounces (44 milliliters) Moderate alcohol use may be of most benefit if you have existing risk factors for heart disease. However, you can take other steps to improve your heart health besides drinking — eating a healthy diet and exercising, for example, which have more robust research behind them. Keep in mind that even moderate use isn’t risk-free. For example, drinking and driving is never a good idea. When to avoid alcohol use In certain situations, the risks of alcohol may outweigh the possible health benefits. For example, talk to your doctor about alcohol use if: You’re pregnant or trying to become pregnant You’ve been diagnosed with alcoholism or alcohol abuse, or you have a strong family history

of alcoholism You have liver or pancreatic disease You have heart failure or you’ve been told you have a weak heart You take prescription or overthe-counter medications that can interact with alcohol You’ve had a hemorrhagic stroke (when a blood vessel in your brain leaks or ruptures) The risks of heavy alcohol use Heavy drinking is defined as more than three drinks on any day or more than seven drinks a week for women and for men older than age 65, and more than four drinks on any day or more than 14 drinks a week for men age 65 and younger. Binge drinking is defined as four or more drinks within two hours for women and five or more drinks within two hours for men. While moderate alcohol use may offer some health benefits, heavy drinking — including binge drinking — has no health benefits. Excessive drinking can increase your risk of serious health problems, including: Certain cancers, including breast cancer and cancers of the mouth, throat and esophagus Pancreatitis Sudden death if you already have cardiovascular disease Heart muscle damage (alcoholic cardiomyopathy) leading to heart failure Stroke High blood pressure Liver disease Suicide Accidental serious injury or death Brain damage and other problems in an unborn child Alcohol withdrawal syndrome Drink alcohol only in moderation — or not at all The latest dietary guidelines make it clear that no one should begin drinking or drink more frequently on the basis of potential health benefits. So don’t feel pressured to drink alcohol. However, if you do drink alcohol and you’re healthy, there’s probably no need to stop as long as you drink responsibly and in moderation.