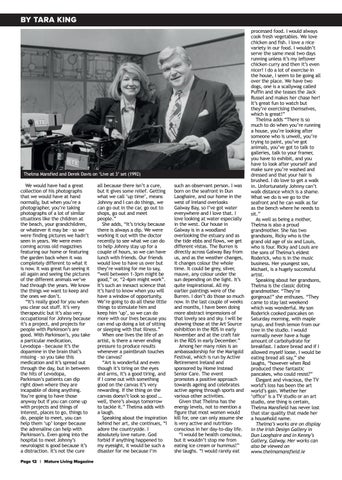 We would have had a great collection of his photographs that we would have at hand normally, but when you’re a photographer, you’re taking photographs of a lot of similar situations like the children at the beach, your grandchildren, or whatever it may be – so we were finding pictures we hadn’t seen in years. We were even coming across old magazines featuring our home or featuring the garden back when it was completely different to what it is now. It was great fun seeing it all again and seeing the pictures of the different animals we’ve had through the years. We know the things we want to keep and the ones we don’t. “It’s really good for you when you clear out stuff. It’s very therapeutic but it’s also very occupational for Johnny because it’s a project, and projects for people with Parkinson’s are good. With Parkinson’s, you take a particular medication, Levodopa – because it’s the dopamine in the brain that’s missing – so you take this medication and it’s spread out through the day, but in between the hits of Levodopa, Parkinson’s patients can dip right down where they are incapable of doing anything. You’re going to have those anyway but if you can come up with projects and things of interest, places to go, things to do, people to meet, you can help them ‘up’ longer because the adrenaline can help with Parkinson’s. Even going into the hospital to meet Johnny’s neurologist is good because it’s a distraction. It’s not the cure Page 12 | Mature Living Magazine

all because there isn’t a cure, but it gives some relief. Getting what we call ‘up time’, means Johnny and I can do things, we can go out in the car, go out to shops, go out and meet people.” She adds, “It’s tricky because there is always a dip. We were working it out with the doctor recently to see what we can do to help Johnny stay up for a couple of hours, so we can have lunch with friends. Our friends would love to have us over but they’re waiting for me to say, “well between 1-3pm might be good,” or, “2-4pm might work”. It’s such an inexact science that it’s hard to know when you will have a window of opportunity. We’re going to do all these little things to stimulate him and keep him ‘up’, so we can do more with our lives because you can end up doing a lot of sitting or sleeping with that illness.” When one lives the life of an artist, is there a never ending pressure to produce results whenever a paintbrush touches the canvas? “Art is wonderful and even though it’s tiring on the eyes and arms, it’s a good tiring, and if I come out with something good on the canvas it’s very rewarding. If the thing on the canvas doesn’t look so good … well, there’s always tomorrow to tackle it.” Thelma adds with a laugh. Speaking about the inspiration behind her art, she continues, “I adore the countryside. I absolutely love nature. God forbid if anything happened to my eyesight, it would be such a disaster for me because I’m

such an observant person. I was born on the seafront in Dun Laoghaire, and our home in the west of Ireland overlooks Galway Bay, so I’ve got water everywhere and I love that. I love looking at water especially in the west. Our house in Galway is in a woodland overlooking the estuary and as the tide ebbs and flows, we get different vistas. The Burren is directly across Galway Bay from us, and as the weather changes, it changes colour the whole time. It could be grey, silver, mauve, any colour under the sun depending on the light. It’s quite inspirational. All my earlier paintings were of the Burren. I don’t do those so much now. In the last couple of weeks and months, I have been doing more abstract impressions of that lovely sea and sky. I will be showing those at the Art Source exhibition in the RDS in early November and at the craft fair in the RDS in early December.” Among her many roles is an ambassadorship for the Marigold Festival, which is run by Active Retirement Ireland and sponsored by Home Instead Senior Care. The event promotes a positive approach towards ageing and celebrates active ageing through sports and various other activities. Given that Thelma has the energy levels, not to mention a figure that most women would kill for, one can only assume she is very active and nutritionconscious in her day-to-day life. “I would be health conscious, but it wouldn’t stop me from eating ice cream or hummus!” she laughs. “I would rarely eat

processed food. I would always cook fresh vegetables. We love chicken and fish. I love a nice variety in our food. I wouldn’t serve the same meal two days running unless it’s my leftover chicken curry and then it’s even nicer! I do a lot of exercise in the house, I seem to be going all over the place. We have two dogs, one is a scallywag called Puffin and she teases the Jack Russel and makes her chase her! It’s great fun to watch but they’re exercising themselves, which is great!” Thelma adds “There is so much to do when you’re running a house, you’re looking after someone who is unwell, you’re trying to paint, you’ve got animals, you’ve got to talk to galleries, talk to your framer, you have to exhibit, and you have to look after yourself and make sure you’re washed and dressed and that your hair is brushed. I do love to get a walk in. Unfortunately Johnny can’t walk distance which is a shame. What we do is we go to the seafront and he can walk as far as the bench where he needs to sit.” As well as being a mother, Thelma is also a proud grandmother. She has two grandsons, Ricky who is the grand old age of six and Louis, who is four. Ricky and Louis are the sons of Thelma’s eldest Roderick, who is in the music business. Her youngest son, Michael, is a hugely successful artist. Speaking about her grandsons, Thelma is the classic doting grandmother. “They’re gorgeous!” she enthuses. “They came to stay last weekend which was wonderful. My son Roderick cooked pancakes on Saturday morning, with maple syrup, and fresh lemon from our tree in the studio. I would normally never have a huge amount of carbohydrate for breakfast. I adore bread and if I allowed myself loose, I would be eating bread all say,” she laughs, “however when Rod produced these fantastic pancakes, who could resist?” Elegant and vivacious, the TV world’s loss has been the art world’s gain. Whether her ‘office’ is a TV studio or an art studio, one thing is certain, Thelma Mansfield has never lost that star quality that made her a household name. Thelma’s works are on display in the Irish Design Gallery in Dun Laoghaire and in Kenny’s Gallery, Galway. Her works can also be viewed on www.thelmamansfield.ie