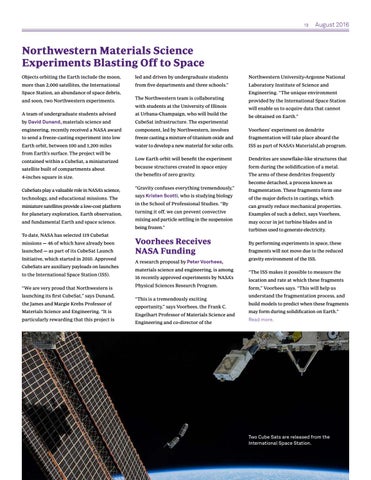 Northwestern Materials Science Experiments Blasting Off to Space Objects orbiting the Earth include the moon,

led and driven by undergraduate students

more than 2,000 satellites, the International

from five departments and three schools.”

Laboratory Institute of Science and Engineering. “The unique environment

Space Station, an abundance of space debris, The Northwestern team is collaborating

provided by the International Space Station

with students at the University of Illinois

will enable us to acquire data that cannot

A team of undergraduate students advised

at Urbana-Champaign, who will build the

by David Dunand, materials science and

be obtained on Earth.”

to send a freeze-casting experiment into low

freeze casting a mixture of titanium oxide and

fragmentation will take place aboard the

water to develop a new material for solar cells.

contained within a CubeSat, a miniaturized

Dendrites are snowflake-like structures that

satellite built of compartments about

because structures created in space enjoy

form during the solidification of a metal.

the benefits of zero gravity.

The arms of these dendrites frequently

from Earth’s surface. The project will be

become detached, a process known as fragmentation. These fragments form one

technology, and educational missions. The

in the School of Professional Studies. “By

turning it off, we can prevent convective

Examples of such a defect, says Voorhees,

and fundamental Earth and space science.

mixing and particle settling in the suspension

may occur in jet turbine blades and in

To date, NASA has selected 119 CubeSat missions — 46 of which have already been launched — as part of its CubeSat Launch Initiative, which started in 2010. Approved CubeSats are auxiliary payloads on launches to the International Space Station (ISS). “We are very proud that Northwestern is launching its first CubeSat,” says Dunand, the James and Margie Krebs Professor of Materials Science and Engineering. “It is particularly rewarding that this project is

of the major defects in castings, which

By performing experiments in space, these fragments will not move due to the reduced gravity environment of the ISS.

materials science and engineering, is among

“The ISS makes it possible to measure the

location and rate at which these fragments

form,” Voorhees says. “This will help us

“This is a tremendously exciting opportunity,” says Voorhees, the Frank C. Engelhart Professor of Materials Science and Engineering and co-director of the

understand the fragmentation process, and build models to predict when these fragments may form during solidification on Earth.” Read more.

Two Cube Sats are released from the International Space Station. 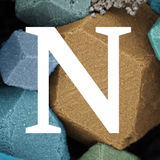