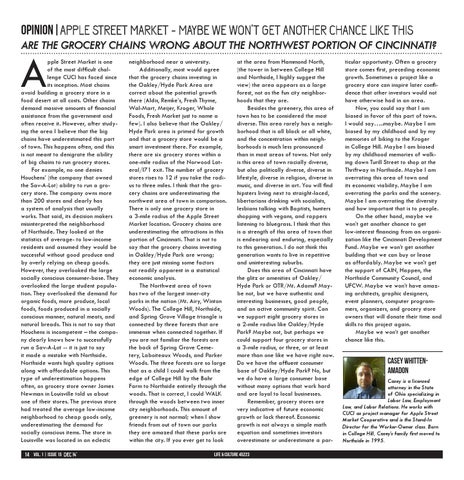 ARE THE GROCERY CHAINS WRONG ABOUT THE NORTHWEST PORTION OF CINCINNATI?

pple Street Market is one of the most difficult challenge CUCI has faced since its inception. Most chains avoid building a grocery store in a food desert at all costs. Other chains demand massive amounts of financial assistance from the government and often receive it. However, after studying the area I believe that the big chains have underestimated this part of town. This happens often, and this is not meant to denigrate the ability of big chains to run grocery stores. For example, no one denies Houchens’ (the company that owned the Sav-A-Lot) ability to run a grocery store. The company owns more than 200 stores and clearly has a system of analysis that usually works. That said, its decision makers misinterpreted the neighborhood of Northside. They looked at the statistics of average- to low-income residents and assumed they would be successful without good produce and by overly relying on cheap goods. However, they overlooked the large socially conscious consumer-base. They overlooked the large student population. They overlooked the demand for organic foods, more produce, local foods, foods produced in a socially conscious manner, natural meats, and natural breads. This is not to say that Houchens is incompetent – the company clearly knows how to successfully run a Sav-A-Lot -- it is just to say it made a mistake with Northside. Northside wants high quality options along with affordable options. This type of underestimation happens often, as grocery store owner James Newman in Louisville told us about one of their stores. The previous store had treated the average low-income neighborhood to cheap goods only, underestimating the demand for socially conscious items. The store in Louisville was located in an eclectic 14 vol. 1 | Issue 15 DEC 14’

neighborhood near a university. Additionally, most would agree that the grocery chains investing in the Oakley/Hyde Park Area are correct about the potential growth there (Aldis, Remke’s, Fresh Thyme, Wal-Mart, Meijer, Kroger, Whole Foods, Fresh Market just to name a few). I also believe that the Oakley/ Hyde Park area is primed for growth and that a grocery store would be a smart investment there. For example, there are six grocery stores within a one-mile radius of the Norwood Lateral/I71 exit. The number of grocery stores rises to 12 if you take the radius to three miles. I think that the grocery chains are underestimating the northwest area of town in comparison. There is only one grocery store in a 3-mile radius of the Apple Street Market location. Grocery chains are underestimating the attractions in this portion of Cincinnati. That is not to say that the grocery chains investing in Oakley/Hyde Park are wrong; they are just missing some factors not readily apparent in a statistical economic analysis. The Northwest area of town has two of the largest inner-city parks in the nation (Mt. Airy, Winton Woods). The College Hill, Northside, and Spring Grove Village triangle is connected by three forests that are immense when connected together. If you are not familiar the forests are the back of Spring Grove Cemetery, Laboiteaux Woods, and Parker Woods. The three forests are so large that as a child I could walk from the edge of College Hill by the Bahr Farm to Northside entirely through the woods. That is correct, I could WALK through the woods between two inner city neighborhoods. This amount of greenery is not normal; when I show friends from out of town our parks they are amazed that these parks are within the city. If you ever get to look

at the area from Hammond North, (the tower in between College Hill and Northside, I highly suggest the view) the area appears as a large forest, not as the fun city neighborhoods that they are. Besides the greenery, this area of town has to be considered the most diverse. This area rarely has a neighborhood that is all black or all white, and the concentration within neighborhoods is much less pronounced than in most areas of towns. Not only is this area of town racially diverse, but also politically diverse, diverse in lifestyle, diverse in religion, diverse in music, and diverse in art. You will find hipsters living next to straight-laced, libertarians drinking with socialists, lesbians talking with Baptists, hunters shopping with vegans, and rappers listening to bluegrass. I think that this is a strength of this area of town that is endearing and enduring, especially to this generation. I do not think this generation wants to live in repetitive and uninteresting suburbs. Does this area of Cincinnati have the glitz or amenities of Oakley/ Hyde Park or OTR/Mt. Adams? Maybe not, but we have authentic and interesting businesses, good people, and an active community spirit. Can we support eight grocery stores in a 2-mile radius like Oakley/Hyde Park? Maybe not, but perhaps we could support four grocery stores in a 3-mile radius, or three, or at least more than one like we have right now. Do we have the affluent consumer base of Oakley/Hyde Park? No, but we do have a large consumer base without many options that work hard and are loyal to local businesses. Remember, grocery stores are very indicative of future economic growth or lack thereof. Economic growth is not always a simple math equation and sometimes investors overestimate or underestimate a par-

ticular opportunity. Often a grocery store comes first, preceding economic growth. Sometimes a project like a grocery store can inspire later confidence that other investors would not have otherwise had in an area. Now, you could say that I am biased in favor of this part of town. I would say…..maybe. Maybe I am biased by my childhood and by my memories of biking to the Kroger in College Hill. Maybe I am biased by my childhood memories of walking down Turill Street to shop at the Thriftway in Northside. Maybe I am overrating this area of town and its economic viability. Maybe I am overrating the parks and the scenery. Maybe I am overrating the diversity and how important that is to people. On the other hand, maybe we won’t get another chance to get low-interest financing from an organization like the Cincinnati Development Fund. Maybe we won’t get another building that we can buy or lease as affordably. Maybe we won’t get the support of CAIN, Happen, the Northside Community Council, and UFCW. Maybe we won’t have amazing architects, graphic designers, event planners, computer programmers, organizers, and grocery store owners that will donate their time and skills to this project again. Maybe we won’t get another chance like this.

Casey WhittenAmadon Casey is a licensed attorney in the State of Ohio specializing in Labor Law, Employment Law, and Labor Relations. He works with CUCI as project manager for Apple Street Market Cooperative and is the Stand-In Director for the Worker-Owner class. Born in College Hill, Casey’s family first moved to Northside in 1995. 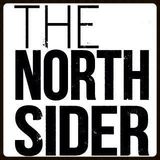