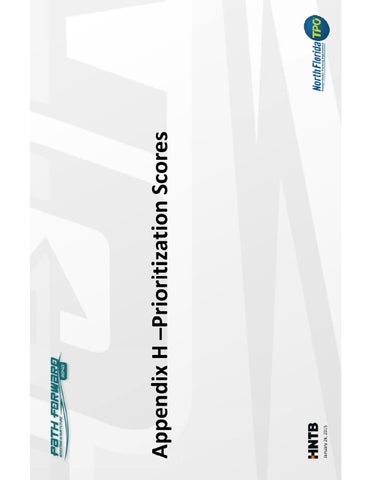 The candidate projects for funding in the Cost Feasible Plan were identified using a prioritization system to rank projects according to the following criteria. Economic competitiveness     

Population with ¼ mile that would benefit from a bus transit route or ½ mile for commuter rail. Transit ridership per day. Inclusion of bicycle and pedestrian amenities. Number of environmental features identified potentially involved based on the results of the Efficient Transportation Decision Making Process planning screen. Project identified on an evacuation route established by the Northeast Florida Regional Council.

Project identified as a priority safety corridor in the Strategic Safety Plan.

These criteria were drawn from the performance measures adopted in the goals and objectives. Not all measures were used in the prioritization system since methodologies to forecast the measure are not available within the context of the travel demand forecasting model (such as reliability) or the measure is a qualitative measure is considered in a more strategic way (such as compatibility with adjacent land uses. Because there are many different units involved in measuring these prioritization criteria, each of the performance measure data was normalized using the statistical measure of a Z-score. The Z-score calculates the difference a value is from the mean of a normal distribution relative to the standard deviation of the data. This provides a ranking of the project in scale that can be more easily compared to other measures. For example, a project may provide access to 10,000 jobs becomes a score of 1.1 (or 10 percent of one standard deviation greater than the mean). Converting all of the measures to the Z-score allows each of the measures of effectiveness to be compared on a relative basis. For measures such as the benefit to cost ratio or demand to capacity ratio which are based on a ratio to a desired value of 1, were not normalized. Since there are a different number of measures within each goal category, once the measures were normalized, the total score within each of the goals was summarized and ranked. For example, the score for access to jobs and the benefit to cost ratio for economic competitiveness were added and then the score within that goal category was ranked. The ranks were then summed for each goal category and then ranked based on the low score being the best. 1

Path Forward 2040 Long Range Transportation Plan After the initial ranking of the projects, strategic priority decisions were used to determine if the project should be funded. For example, two projects that received a high rank were identified as having potential environmental fatal flaws and were removed.  

Following the prioritization of the projects, the projects were reviewed strategically to evaluate:    

The following tables summarize the scores and rankings for the highway capacity projects.