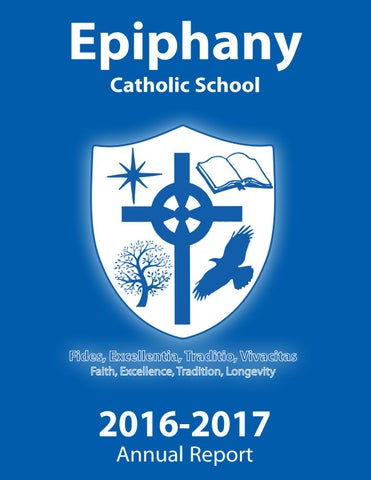 FROM THE PRINCIPAL As we come to the close of another school year I find myself reflecting upon how blessed we have been and how grateful I am for the generosity and support of our Church, community and school families.

In just the span of a single school year, we have added fencing around the perimeter, a camera security system, a new picnic pavilion, new laptops for the classrooms, a new crest, our mascot “Eli the Eagle”, and two new buses. New whiteboards were installed in every classroom as well as flat screen tvs.

Our students continue to amaze us with their many gifts and talents-winning awards in Art, Science, Robotics, Speech and Essay contests spanning the nation. Our first annual Night of the Religious Arts allowed us to showcase our students’ talents in art, music and drama. We sponsored a co-ed soccer team after a three year hiatus. Our Archery program continues to grow and our students’ love of legos and design challenges spans K-8, with clubs and the Epiphany EagleBots FIRST FLL team. Our school has broadened and increased its’ enrollment through our Rural Education Initiative, with families now attending our school from both Branford and Live Oak Catholic churches. Next year we will begin sending students to SFCA aboard our school buses, making the possibility of a K-12 Catholic education easier for our families who could not participate in the carpool on a daily basis. Our Epiphany Catholic School School Board and Strategic Planning Committee have begun discussions about playground renovations and building expansion in the future. Our enrollment continues to increase as we plan for our 59th year here in Lake City! May your summer be filled with sunshine, cool breezes and many happy memories. Yours In Christ,

MISSION STATEMENT Epiphany Catholic School fosters high expectations in a Christ centered environment for all students in FAITH, ACADEMICS AND SERVICE within the Catholic tradition.

In March 1960 the school relocated to its present site, situated two miles south of downtown Lake City, between Marion St. and U.S. 441. In Sept. 1960 three of the original sisters from Wexford moved with Fr. Malone to DeLand, Florida and served there well into the 80’s. Two new sisters arrived from Ireland to serve Lake City. The Irish sisters served Epiphany into the late 70’s. They were eventually recalled to Ireland. After the Sisters of Mercy left the Sisters of St. Joseph from St. Augustine were called to staff Epiphany School and served there until 1995. We would also like to recognize Fr. Diaz’s and Fr. Pageau, from our early history, for all the time and effort they both put into the school. In September 1961, grade five was added with grade six following in 1962; this brought the enrollment to 107. Epiphany grew in enrollment each year from its initial enrollment of 29 students in 1959 to 107 in 1962. An increased enrollment of 152 students in 1968 necessitated an addition of a library and modification of the lunchroom. Construction of a new church was done around this time. A steady increase in enrollment in the following years required the lunchroom to be converted into a classroom and the church social hall was used for the lunchroom beginning in 1971. In 1974, the Glander building was erected to accommodate Art and Music classes. In 1996, Epiphany Catholic School added Kindergarten, with seventh grade following in August 1999, and eighth grade added a year later. In July of 1995, Epiphany hired its first Lay principal, J. Mark Ackermen of Boone, North Carolina, a former native of the area. In 2000, Mrs. Rita Klenk became principal. A new media center, administrative offices, clinic and student bathrooms were added in the summer of 2000. In 2001 a Carmelite Sister joined the staff, and in 2003 Carol Ghionzoli became principal. Rita Klenk took over as principal again in the Fall of 2009. Today, Epiphany Catholic School serves the community by providing a K-8 program.

OUR STUDENTS IN THE NEWS

OUR STUDENTS IN THE NEWS