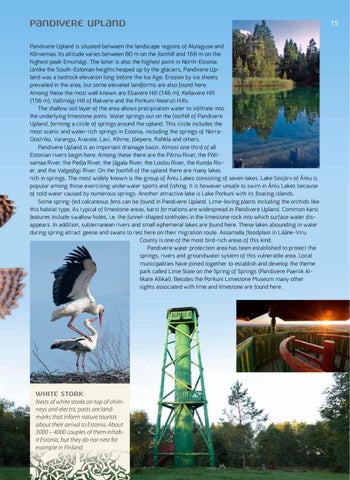 PANDIVERE UPLAND Pandivere Upland is situated between the landscape regions of Alutaguse and Kõrvemaa. Its altitude varies between 80 m on the foothill and 166 m on the highest peak Emumägi. The latter is also the highest point in North-Estonia. Unlike the South-Estonian heights heaped up by the glaciers, Pandivere Upland was a bedrock elevation long before the Ice Age. Erosion by ice sheets prevailed in the area, but some elevated landforms are also found here. Among these the most well known are Ebavere Hill (146 m), Kellavere Hill (156 m), Vallimägi Hill of Rakvere and the Porkuni-Neeruti Hills. The shallow soil layer of the area allows precipitation water to infiltrate into the underlying limestone joints. Water springs out on the foothill of Pandivere Upland, forming a circle of springs around the upland. This circle includes the most scenic and water-rich springs in Estonia, including the springs of NorraOostriku, Varangu, Aravate, Lavi, Kihme, Jõepere, Rahkla and others. Pandivere Upland is an important drainage basin. Almost one third of all Estonian rivers begin here. Among these there are the Pärnu River, the Põltsamaa River, the Pedja River, the Jägala River, the Loobu River, the Kunda River, and the Valgejõgi River. On the foothill of the upland there are many lakes rich in springs. The most widely known is the group of Äntu Lakes consisting of seven lakes. Lake Sinijärv of Äntu is popular among those exercising underwater sports and fishing. It is however unsafe to swim in Äntu Lakes because of cold water caused by numerous springs. Another attractive lake is Lake Porkuni with its floating islands. Some spring-fed calcareous fens can be found in Pandivere Upland. Lime-loving plants including the orchids like this habitat type. As typical of limestone areas, karst formations are widespread in Pandivere Upland. Common karst features include swallow holes, i.e. the funnel-shaped sinkholes in the limestone rock into which surface water disappears. In addition, subterranean rivers and small ephemeral lakes are found here. These lakes abounding in water during spring attract geese and swans to rest here on their migration route. Assamalla floodplain in Lääne-Viru County is one of the most bird-rich areas of this kind. Pandivere water protection area has been established to protect the springs, rivers and groundwater system of this vulnerable area. Local municipalities have joined together to establish and develop the theme park called Lime State on the Spring of Springs (Pandivere Paeriik Allikate Allikal). Besides the Porkuni Limestone Museum many other sights associated with lime and limestone are found here.

WHITE STORK Nests of white storks on top of chimneys and electric posts are landmarks that inform nature tourists about their arrival to Estonia. About 3000 – 4000 couples of them inhabit Estonia, but they do not nest for example in Finland. North-Estonia features a variety of natural wonders. It has a stun- ning coastline with alternating limestone cliffs high above the sea and...

North-Estonia features a variety of natural wonders. It has a stun- ning coastline with alternating limestone cliffs high above the sea and...