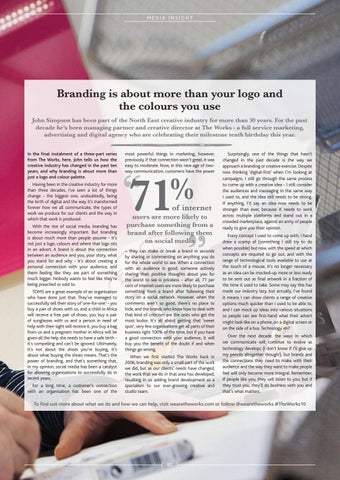 Branding is about more than your logo and the colours you use John Simpson has been part of the North East creative industry for more than 30 years. For the past decade he’s been managing partner and creative director at The Works - a full service marketing, advertising and digital agency who are celebrating their milestone tenth birthday this year.

| In the final instalment of a three-part series from The Works, here, John tells us how the creative industry has changed in the past ten years, and why branding is about more than just a logo and colour palette. Having been in the creative industry for more than three decades, I’ve seen a lot of things change - the biggest one, undoubtedly, being the birth of digital and the way it’s transformed forever how we all communicate, the types of work we produce for our clients and the way in which that work is produced. With the rise of social media, branding has become increasingly important. But branding is about much more than people assume - it’s not just a logo, colours and where that logo sits in an advert. A brand is about the connection between an audience and you, your story, what you stand for and why - it’s about creating a personal connection with your audience, and them feeling like they are part of something much bigger. Nobody wants to feel like they’re being preached or sold to. TOMS are a great example of an organisation who have done just that. They’ve managed to successfully tell their story of ‘one-for-one’ - you buy a pair of shoes with us, and a child in Africa will receive a free pair of shoes, you buy a pair of sunglasses with us and a person in need of help with their sight will receive it, you buy a bag from us and a pregnant mother in Africa will be given all the help she needs to have a safe birth it’s compelling and can’t be ignored. Ultimately, it’s not about the shoes you’re buying, it’s about what buying the shoes means. That’s the power of branding, and that’s something that, in my opinion, social media has been a catalyst for allowing organisations to successfully do in recent years. For a long time, a customer’s connection with an organisation has been one of the

most powerful things in marketing, however, previously, if that connection wasn’t great, it was easy to moderate. Now, in this new age of twoway communication, customers have the power

– they can make or break a brand in seconds by sharing or commenting on anything you do for the whole world to see. When a connection with an audience is good, someone actively sharing their positive thoughts about you for the world to see is priceless - after all, 71 per cent of internet users are more likely to purchase something from a brand after following their story on a social network. However, when the comments aren’t so good, there’s no place to hide, and the brands who know how to deal with that kind of criticism are the ones who get the most kudos. It’s all about getting that ‘sweet spot’, very few organisations get all parts of their business right 100% of the time, but if you have a good connection with your audience, it will buy you the benefit of the doubt if and when things go wrong. When we first started The Works back in 2006, branding was only a small part of the work we did, but as our clients’ needs have changed, the work that we do in that area has developed, resulting in us adding brand development as a specialism to our ever-growing creative and studio team.

Surprisingly, one of the things that hasn’t changed in the past decade is the way we approach a branding or creative exercise. Despite now thinking ‘digital-first’ when I’m looking at campaigns, I still go through the same process to come up with a creative idea - I still consider the audiences and messaging in the same way I used to, and the idea still needs to be strong. If anything, I’d say an idea now needs to be stronger than ever, because it needs to work across multiple platforms and stand out in a crowded marketplace, against an army of people ready to give you their opinion. Every concept I used to come up with, I hand drew a scamp of (something I still try to do when possible) but now, with the speed at which concepts are required to go out, and with the range of technological tools available to use at the touch of a mouse, it’s no longer necessary as an idea can be mocked-up more or less ready to be sent out as final artwork in a fraction of the time it used to take. Some may say this has made our industry lazy, but actually, I’ve found it means I can show clients a range of creative options much quicker than I used to be able to, and I can mock up ideas into various situations so people can see first-hand what their advert might look like on a phone, on a digital screen or on the side of a bus. Technology eh? Over the next decade, the ways in which we communicate will continue to evolve as technology develops (I don’t know if I’ll give up my pencils altogether though!), but brands and the connections they need to make with their audience and the way they want to make people feel will only become more integral. Remember, if people like you, they will listen to you, but if they trust you, they’ll do business with you and that’s what matters.

To find out more about what we do and how we can help, visit wearetheworks.com or follow @wearetheworks #TheWorks10 The Business and Leisure magazine for the North East region

The Business and Leisure magazine for the North East region