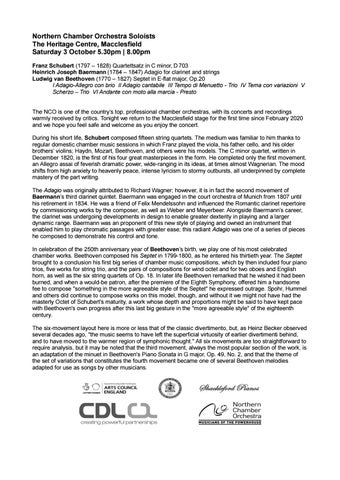 Northern Chamber Orchestra Soloists The Heritage Centre, Macclesfield Saturday 3 October 5.30pm | 8.00pm Franz Schubert (1797 – 1828) Quartettsatz in C minor, D 703 Heinrich Joseph Baermann (1784 – 1847) Adagio for clarinet and strings Ludwig van Beethoven (1770 – 1827) Septet in E-flat major, Op.20 I Adagio-Allegro con brio II Adagio cantabile III Tempo di Menuetto - Trio IV Tema con variazioni V Scherzo – Trio VI Andante con moto alla marcia - Presto The NCO is one of the country’s top, professional chamber orchestras, with its concerts and recordings warmly received by critics. Tonight we return to the Macclesfield stage for the first time since February 2020 and we hope you feel safe and welcome as you enjoy the concert. During his short life, Schubert composed fifteen string quartets. The medium was familiar to him thanks to regular domestic chamber music sessions in which Franz played the viola, his father cello, and his older brothers’ violins; Haydn, Mozart, Beethoven, and others were his models. The C minor quartet, written in December 1820, is the first of his four great masterpieces in the form. He completed only the first movement, an Allegro assai of feverish dramatic power, wide-ranging in its ideas, at times almost Wagnerian. The mood shifts from high anxiety to heavenly peace, intense lyricism to stormy outbursts, all underpinned by complete mastery of the part writing. The Adagio was originally attributed to Richard Wagner; however, it is in fact the second movement of Baermann’s third clarinet quintet. Baermann was engaged in the court orchestra of Munich from 1807 until his retirement in 1834. He was a friend of Felix Mendelssohn and influenced the Romantic clarinet repertoire by commissioning works by the composer, as well as Weber and Meyerbeer. Alongside Baermann’s career, the clarinet was undergoing developments in design to enable greater dexterity in playing and a larger dynamic range. Baermann was an proponent of this new style of playing and owned an instrument that enabled him to play chromatic passages with greater ease; this radiant Adagio was one of a series of pieces he composed to demonstrate his control and tone. In celebration of the 250th anniversary year of Beethoven’s birth, we play one of his most celebrated chamber works. Beethoven composed his Septet in 1799-1800, as he entered his thirtieth year. The Septet brought to a conclusion his first big series of chamber music compositions, which by then included four piano trios, five works for string trio, and the pairs of compositions for wind octet and for two oboes and English horn, as well as the six string quartets of Op. 18. In later life Beethoven remarked that he wished it had been burned, and when a would-be patron, after the premiere of the Eighth Symphony, offered him a handsome fee to compose &quot;something in the more agreeable style of the Septet&quot; he expressed outrage. Spohr, Hummel and others did continue to compose works on this model, though, and without it we might not have had the masterly Octet of Schubert&#39;s maturity, a work whose depth and proportions might be said to have kept pace with Beethoven&#39;s own progress after this last big gesture in the &quot;more agreeable style&quot; of the eighteenth century. The six-movement layout here is more or less that of the classic divertimento, but, as Heinz Becker observed several decades ago, &quot;the music seems to have left the superficial virtuosity of earlier divertimenti behind, and to have moved to the warmer region of symphonic thought.&quot; All six movements are too straightforward to require analysis, but it may be noted that the third movement, always the most popular section of the work, is an adaptation of the minuet in Beethoven&#39;s Piano Sonata in G major, Op. 49, No. 2, and that the theme of the set of variations that constitutes the fourth movement became one of several Beethoven melodies adapted for use as songs by other musicians.

For more information about the NCO and its concerts at Stoller Hall, Manchester and Macclesfield Heritage Centre, please visit our website, www.ncorch.co.uk 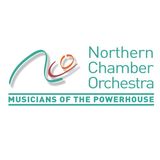