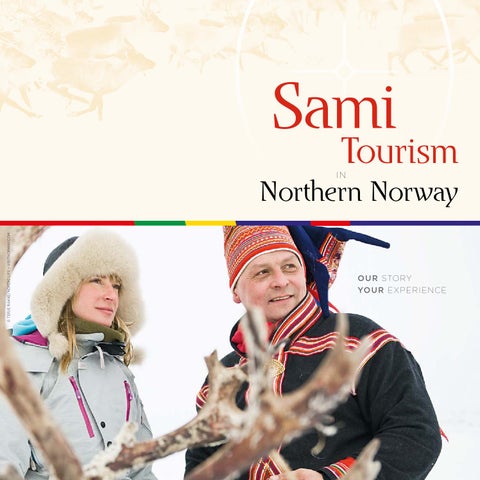 The Sami National Day is celebrated February 6 in all four countries.

Sápmi – the land of the Sami Scandinavia recognized and protected under

of the Sami. It derives from the Samis own

the international conventions of indigenous

name for themselves, Samit or sápmelaččat.

The Sami are the indigenous people of

There are approximately 40 000 Sami people

Norway, Sweden, Finland and Russia. The

Sami are the only indigenous people of

Sápmi is the name of the traditional homeland

We invite you to Sápmi on a journey to discover the Sami cultures and traditions. Visit our land, immerse yourself in our warm hospitality, and take part in our world. Sit fireside and listen to the stories or let us sing our traditional joik. Get to know the reindeers, sample our food and experience our culture.

Step into our world!

– Eight Seasons In Sápmi, we describe our year with eight seasons. Due to

concept of time is based on the life cycles of the reindeer. Dálvi – winter: From Christmas time to the end of February

herding much of the Sami

Summer: End of May to

late April to late May

of March to late April

Experience Northern Norway’s spectacular scenery and stunning surroundings from a new perspective. Embark on the adventure of a lifetime as you go on a guided trip with reindeers, go on a riverboat trip, or go hunting for the northern lights. Celebrate our unique heritage, art work, food and fascinating history in our Native cultural centers, or explore how our traditions and hospitality live on in the present day at Sami owned activity companies and inns.

through our eyes and experience its wonders with your hearts.

Gákti - the traditional Sami clothing This is the most prominent symbol of the Sami. It carries the history of the Sami people and is an important part of the identity. You can tell from which geographical area, and some times even from which

family a person comes from by looking at the designs.

way, and it is very much a living craftsmanship.

luohti/joik. Luohti has always been important in the Sami community, and is a unique form of cultural expression for the Sami people. Luohti

combination of singing and using the voice as an instrument. The luohti is common to all Sápmi, but with geographical variations in the luohtis musical style. The luohti can describe different elements such as places, animals, persons or events. This type of song can be deeply personal or spiritual in nature. The luohti is not a song about the person or place, but the one singing is attempting to evoke or depict that person or place through song – one joiks their friend, not about their friend (similar to how one doesn’t paint or depict about a flower, but depicts the flower itself).

Sami music is often associated with

The cuisine of Sápmi is based on local produce, like fish, game, reindeer and berries. As family is very important to the Sami, holidays and parties such as weddings and baptisms

gathers many people. On these occasions, it is important to make good, simple food, as there can be as many as 500-1000 guests at a wedding. The most common dish served is

the biđus, a stew made of reindeer meet, potatoes and carrots.

from the hunting of wild reindeers thousands of years ago to

• that the reindeers fur is hollow

vehicles are important tools. The reindeers stay in their winter

to provide insulation? • that both the male and the female have antlers? • that there are approximately 200 000 reindeers in Norway?

modern reindeer herding where technical equipment and motor pasture on the inland during winter, and move to the coast for the summer. The traditional unit of organization in Sami reindeer husbandry is the «siida». This is basically a grouping of one or more families, where the practical work related to reindeer herding is shared. Reindeer are primarily used for meat production, while hides, bones and antlers are important for clothing and handicrafts.

The Sami languages spoken in Sápmi are classified

as a branch of the Uralic language group.

There are ten spoken Sami languages and six

Sami has approximately 15 000 speakers, and is the most spoken of the six languages. Northern Norway is the perfect place to try out a little of the indigenous language – here are a few pointers…