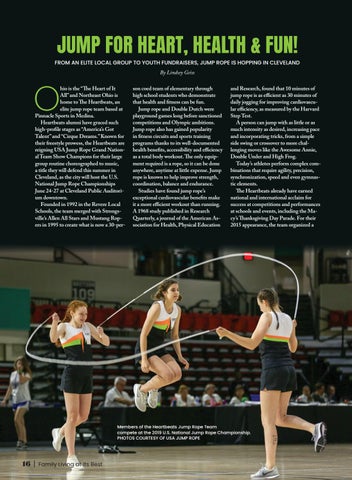 FROM AN ELITE LOCAL GROUP TO YOUTH FUNDRAISERS, JUMP ROPE IS HOPPING IN CLEVELAND

hio is the “The Heart of It All” and Northeast Ohio is home to The Heartbeats, an elite jump rope team based at Pinnacle Sports in Medina. Heartbeats alumni have graced such high-profile stages as “America’s Got Talent” and “Cirque Dreams.” Known for their freestyle prowess, the Heartbeats are reigning USA Jump Rope Grand National Team Show Champions for their large group routine choreographed to music, a title they will defend this summer in Cleveland, as the city will host the U.S. National Jump Rope Championships June 24-27 at Cleveland Public Auditorium downtown. Founded in 1992 in the Revere Local Schools, the team merged with Strongsville’s Allen All Stars and Mustang Ropers in 1995 to create what is now a 30-per-

son coed team of elementary through high school students who demonstrate that health and fitness can be fun. Jump rope and Double Dutch were playground games long before sanctioned competitions and Olympic ambitions. Jump rope also has gained popularity in fitness circuits and sports training programs thanks to its well-documented health benefits, accessibility and efficiency as a total body workout. The only equipment required is a rope, so it can be done anywhere, anytime at little expense. Jump rope is known to help improve strength, coordination, balance and endurance. Studies have found jump rope’s exceptional cardiovascular benefits make it a more efficient workout than running. A 1968 study published in Research Quarterly, a journal of the American Association for Health, Physical Education

and Research, found that 10 minutes of jump rope is as efficient as 30 minutes of daily jogging for improving cardiovascular efficiency, as measured by the Harvard Step Test. A person can jump with as little or as much intensity as desired, increasing pace and incorporating tricks, from a simple side swing or crossover to more challenging moves like the Awesome Annie, Double Under and High Frog. Today’s athletes perform complex combinations that require agility, precision, synchronization, speed and even gymnastic elements. The Heartbeats already have earned national and international acclaim for success at competitions and performances at schools and events, including the Macy’s Thanksgiving Day Parade. For their 2015 appearance, the team organized a

16 | Family Family Living Living at at Its Its Best Best 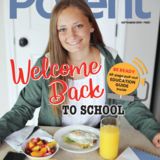 Family Living at its Best in Greater Cleveland!

Family Living at its Best in Greater Cleveland!