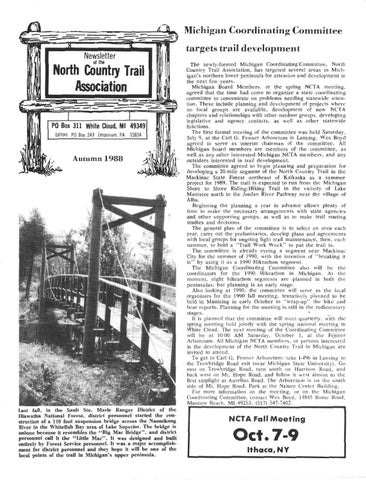 Last fall, in the Sault Ste. Marie Ranger District of the Hiawatha National Forest, district personnel started the construction of a 110 foot suspension bridg.e across the Naomlkong River in the Whitefish Bay area of Lake Superior. The bridge is unique because It resembles the "Big Mac Bridge", and district personnel call it the "Little Mac". It was designed and built entirely by Forest Service personnel. It was a major accomplishment for district personnel and they hope it will be one of the focal points of the trail in Michigan's upper peninsula.

The newly-formed Michigan Coordinating Committee, North Country Trail Association, has targeted several areas in Michigan's northern lower peninsula for attention and development in the next few years. Michigan Board Members, at the spring NCT A meeting. agreed that the time had come to organize a state coordinating committee to concentrate on problems needing statewide attention. These include planning and development of projects where no local groups are available, development of new NCT A chapters and relationships with other outdoor groups. developing legislative and agency contacts, as well as other statewide functions. The first formal meeting of the committee was held Saturday. July 9, at the Carl G. Fenner Arboretum in Lansing. Wes Boyd路 agreed to serve as interim chairman of the committee. All Michigan board members are members of the committee, as well as any other interested Michigan NCTA members. and any outsiders interested in trail development. The committee agreed to begin planning and preparation for developing a 20-mile segment of the North Country Trail in the Mackinac State Forest northeast of Kalkaska as a summer project for 1989. The trail is expected to run from the Michigan Shore to Shore Riding-Hiking Trail in the vicinity of Lake Manistee north to the Jordan River Pathway near the village of Alba. Beginning the planning a year in advance allows plenty of time to make the necessary arrangements with state agencies and other supporting groups, as well as to make trail routing studies and decisions. The general plan of the committee is to select an area each year, carry out the preliminaries, develop plans and agreements with local groups for ongoing light trail maintenance, then, each summer, to hold a "Trail Work Week" to put the trail in. The committee is already eyeing a segment near Mackinac City for the summer of 1990, with the intention of "breaking it in" by using it as a 1990 Hikeathon segment. The Michigan Coordinating Committee also will be the coordinators for the 1990 Hikeathon in Michigan. At the moment, eight hikeathon segments are planned in both the peninsulas, but planning is an early stage. Also looking at 1990, the committee will serve as路 the local organizers for the 1990 fall meeting, tentatively planned to be held in Munising in early October to "wrap-up" the hike and hear reports. Planning for the meeting is still in the rudimentary stages. ~ It is planned that the committee will meet quarterly. with the spring meeting held jointly with the spring national meeting in White Cloud. The next meeting of the Coordinating Committee will be at 10:00 AM Saturday, October I. at the Fqnner Arboretum. All Michigan NCTA members, or persons interested in the development of the North Country Trail in Michigan are invited to attend. To get to Carl G. Fenner Arboretum: take 1-496 in Lansing to the Trowbridge Road exit (near Michigan State University). Go east on Trowbridge Road, turn south on Harrison Road, and back west on Mt. Hope Road, and follow it west almost to the first stoplight at Aurelius Road. The Arboretum is on the south side of Mt. Hope Road. Park at the Nature Center Building. For more information on the meeting. or on the Michigan Coordinating Committee, contact Wes Boyd. 14845 Rome Road, Manitou Beach, Ml 49253. (517) 547-7402. 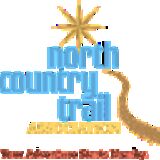