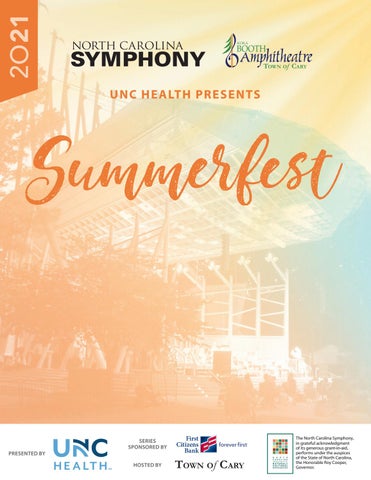 SERIES SPONSORED BY PRESENTED BY HOSTED BY

The North Carolina Symphony, in grateful acknowledgment of its generous grant-in-aid, performs under the auspices of the State of North Carolina, the Honorable Roy Cooper, NORTH CAROLINA SYMPHONY • 1 Governor.

Overture to The Marriage of Figaro, K. 492 Theme from Schindler’s List

Gioachino Rossini Overture to The Barber of Seville

Concerning Hobbits from The Lord of the Rings: The Fellowship of the Ring

MOVIE MUSIC CLASSICS: ABOUT THE CONDUCTOR Joseph Peters, conductor Joseph Peters, Associate Principal Oboe and English horn with the North Carolina Symphony, previously held Principal Oboe chairs with the Minnesota Orchestra and Buffalo Philharmonic Orchestra. He has performed as guest principal with the Baltimore Symphony Orchestra and The Florida Orchestra, and for three years, he was a member of the New World Symphony in Florida. In addition to hosting the North Carolina Symphony streaming concerts for the 2020/21 season, Joseph has conducted the Symphony in a recent program of movie music and Holiday Pops concerts. He conducts the Taneycomo Festival Orchestra in Branson, Missouri, and was Music Director of the SUNY Buffalo State Philharmonia Orchestra and the Saybrook College Orchestra of Yale University. He has also led a variety of programs at the New World Symphony.

Joseph first played with the Minnesota Orchestra at age 18, performing Mozart’s Oboe Concerto. He has also appeared as a soloist with the Detroit Symphony Orchestra and New World Symphony, as well as the Greater Twin Cities Youth Symphonies, of which he is an alumnus. Long committed to teaching, Joseph was the oboe and conducting instructor at the SoBe Institute of the Arts and conducted side-by-side concerts for New World Symphony’s MusicLab program. He received a bachelor’s degree from the University of Minnesota and a master’s degree from Yale University.

MOVIE GUIDE Here’s where to watch all of the movies represented in the music on tonight’s concert! Mozart: Overture to The Marriage of Figaro

Rossini: Overture to Barber of Seville

Grieg: Suite No. 1 from Peer Gynt

• A Clockwork Orange: Stream on Netflix or HBO Max, or rent on iTunes or Google Play.

• The Lord of the Rings: The Fellowship of the Ring: Stream on HBO Max or rent on Amazon Prime Video, YouTube, iTunes, or Google Play. Barber: Adagio for Strings

• Platoon: Stream on Netflix or rent on Amazon Prime Video.

Badelt: Pirates of the Caribbean

• Pirates of the Caribbean: The Curse of the Black Pearl: Stream on Disney+ or rent on Amazon Prime Video, YouTube, iTunes, or Google Play.

Music to our ears. Forever First.

The beauty of music is it says more than words alone can ever manage. That’s why we’re proud to sponsor organizations like the North Carolina Symphony that give our communities so much worth listening to. First Citizens Bank. Forever First.

CIRQUE DE LA SYMPHONIE: ABOUT THE ARTISTS Wesley Schulz, Associate Conductor The Lucy Moore Ruffin Chair Now in his fourth season as North Carolina Symphony Associate Conductor, Wesley Schulz is also Music Director of the Auburn Symphony Orchestra in Washington. Previously, he was a Conducting Fellow at the Seattle Symphony, Assistant Conductor of the Britt Festival Orchestra, and Education and Family Conductor for the Austin Symphony Orchestra. Wesley has led concerts across North Carolina with the Symphony including programs in the Classical, Pops, and Friday Favorites series, Holiday Pops, family and education concerts, and Summerfest performances at Koka Booth Amphitheatre in Cary, where NCS makes its summer home. As Music Director of the Auburn Symphony Orchestra, Wesley’s recent projects include visual art projects with local elementary schools, multiple commissions of new music, and expanding the orchestra’s offerings to include more diverse concert presentations at various local parks, breweries, and community spaces. He is also the former Music Director of Bainbridge Symphony Orchestra and Seattle Festival Orchestra. Wesley graduated magna cum laude with bachelor’s degrees in percussion performance and music education from

Ball State University, and doctoral and master’s degrees in orchestral conducting from the University of Texas at Austin. When not on the podium, he can be seen running outdoors or playing endless fetch with his two dogs, Chewbacca and Han Solo. Cirque de la Symphonie Cirque de la Symphonie is the only cirque company in the world that works exclusively with symphony orchestras. Both veteran concert-goers and new patrons are thrilled and bedazzled as they see aerial flyers, acrobats, contortionists, dancers, jugglers, balancers, and strongmen perform to music selected to be both entertaining for the audience and challenging for the orchestra. Their performances are adapted to a stage shared with the symphony, and each artist’s performance is choreographed to the music. Since the company was founded in 2005, Cirque de la Symphonie programs have included world-record holders, gold-medal winners, and Olympians. Long a favorite of North Carolina Symphony audiences, the troupe has appeared in concerts both at Summerfest and in Meymandi Concert Hall. This performance includes artists who have toured with the renowned Moscow State Circus and appeared in major productions from Las Vegas to South Korea.

Overture to L’Italiana in Algeri

BEETHOVEN SYMPHONY NO. 4: ABOUT THE ARTISTS Joseph Young, conductor Joseph Young is Music Director of the Berkeley Symphony, Artistic Director of Ensembles for the Peabody Conservatory of the Johns Hopkins University, and Resident Conductor of the National Youth Orchestra–USA at Carnegie Hall. This is his debut with the North Carolina Symphony. In his most recent role, Joseph served as the Assistant Conductor of the Atlanta Symphony Orchestra, where he conducted more than 50 concerts per season and served as the Music Director of the Atlanta Symphony Youth Orchestra. Previous appointments have included Resident Conductor of the Phoenix Symphony, and a League of American Orchestras Conducting Fellowship with the Buffalo Philharmonic Orchestra and Baltimore Symphony Orchestra. He has made appearances in the United States and Europe including the Saint Louis Symphony Orchestra, Colorado Symphony, Detroit Symphony Orchestra, New World Symphony, Spoleto Festival USA Orchestra, and Orquestra Sinfónica do Porto Casa da Música. Joseph is a recipient of the 2015 Solti Foundation U.S. Career Assistance Award, an award he also won in 2008 and 2014. In 2013, he was a semi-finalist in the Gustav Mahler Conducting Competition (Bamberg, Germany). In 2011, he was one of six conductors featured in the League of American Orchestras’ Bruno Walter National Conductor Preview. He completed

graduate studies at the Peabody Conservatory in 2009, earning an artist’s diploma in conducting. Rebekah Daley, horn The Mary T. McCurdy Chair Rebekah Daley won her position as Principal Horn of the North Carolina Symphony while pursuing her graduate work at the Shepherd School of Music at Rice University, studying with William VerMeulen. She previously earned her bachelor’s degree at the Curtis Institute of Music, where she studied with Jerome Ashby and Jennifer Montone, after joining the Cleveland Orchestra Youth Orchestra as a highschool sophomore. In 2016 she was featured as a soloist with the North Carolina Symphony performing the Strauss Horn Concerto No. 2. Also an avid chamber musician, Rebekah has spent several summers at the Marlboro Music Festival. Other summer festivals include Twickenhamfest, Music Academy of the West, National Repertory Orchestra, Sarasota Summer Music Festival, and Colorado College Festival. In 2014, she released an album with the Southern Bells, a horn quartet she formed with friends. She has performed with the Spoleto Festival Orchestra, New World Symphony, and Symphony in C in Camden, New Jersey.

David holds degrees from the University of Georgia and Boston University in violin performance, and a master’s degree in instrumental conducting from Indiana University. He lives in Cary with his wife Emily, a violinist with the North Carolina Symphony, and their daughter Maia.

Enjoying today’s concert? It’s never been easier to make a gift and support exceptional music right now! Text GIVEMUSIC to 243725 and ensure that your North Carolina Symphony will continue to thrill audiences of all ages for years to come.

To Be Filled, Associate Principal The Blanche Martin Shaw Chair

To Be Filled, Assistant Principal The Kathryn Powell and Green Flavie Cooper Chair

LIBRARY Stephanie Wilson, Principal The Mary Colvert and Banks C. Talley Chair *Acting position **Leave of absence Named musician chairs are made possible through very meaningful gifts to the Symphony’s endowment. As such, these donor families are also members of the Lamar Stringfield Society. Learn more. All string players rotate stands on a periodic basis in each section with the exception of titled players: Principals, Associate Principals, and Assistant Principals.

Take a moment to be calm, present, and mindful, with our Musical Meditations series—pairing selections from our audio archives with breathtaking scenes from North Carolina State Parks!

PRESENTED IN PARTNERSHIP WITH

CORPORATE SUPPORT 2020/21 SEASON The North Carolina Symphony is grateful for the generous support of the many corporations across the state that have partnered with us to sustain and advance the mission of the orchestra. With their help, the music WILL play on.