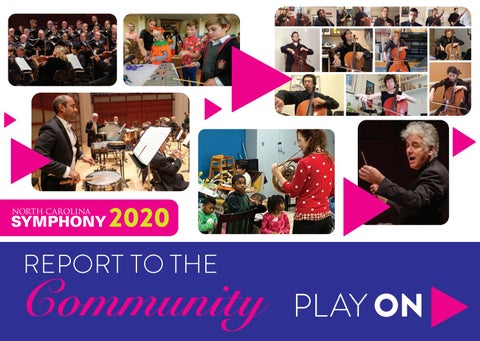 DEAR FRIENDS, During a year of unforeseen change, our loyal supporters have enabled the North Carolina Symphony (NCS) to keep our music constant. You have allowed us to continue sharing performances that are meaningful to North Carolinians, providing a source of solace and joy. And your generosity has made it possible for us to support at-home learners and teachers across our state—and even across our nation and around the globe—through high-quality, virtual music education. When the pandemic began, the Symphony quickly adapted—and with great innovation, we have continued our mission of artistic excellence, statewide service, and music education. Through this time, we have been reminded that NCS, in 1932, was founded in the midst of the Great Depression; resilience is in our DNA. We have focused on fiscal responsibility, and with the unprecedented philanthropic actions of many individuals and businesses—and extraordinary support from the state legislature and the North Carolina Department of Natural and Cultural Resources— we have kept our musicians employed, upholding our position as the largest employer of performing artists in our state. The Symphony has—since our inception as the state’s orchestra—been dedicated to serving all North Carolinians. In 2019/20, we continued to seek pathways to increase diversity and inclusion, welcoming everyone into the Symphony’s world. Finally, it was with bittersweet emotion that we marked Grant Llewellyn’s transition from Music Director to Music Director Laureate. While our grand celebrations are on hold for now, Grant nevertheless has felt the love of his Symphony—and is honored to be a recipient of the 2020 City of Raleigh Medal of Arts. On behalf of my fellow Trustees, thank you for your extraordinary ongoing support. The Music WILL Play On— for you, and thanks to you. Sincerely,

AS 2019 TURNED TO 2020, THE WORLD BEGAN TO SHIFT... AND AS NEW CHALLENGES PLAYED OUT, YOUR SUPPORT HELPED THE NORTH CAROLINA SYMPHONY TO

of our new album

on the Billboard Traditional Classical chart with the release

Our virtual Education Concert, released just one week after schools shut down, became our

#1 most-viewed video of all time

#GivingTuesday, a global day of giving

12% of gifts came from brandnew donors on

Holiday concertgoers donated 240+ pounds of food for families in need, through our partnership with Interfaith Food Shuttle

28% of gifts came from brandnew donors on #GivingTuesdayNow, a global day of giving in response to the pandemic

for essential healthcare workers, though our partnership with 18 Restaurant Group

Leading the most extensive music education program of any orchestra, NCS supports students, teachers, and families across the state. In 2019/20, we ensured that our offerings were more accessible than ever. • At our first Sensory-Friendly Concert—designed for children and adults with autism, sensory sensitivities, and other disabilities—our 1,400+ audience members were welcome to move about and express themselves as the music played. The concert, made possible by a grant from the William R. Kenan, Jr. Charitable Trust, provided many accommodations, including Braille programs, audio description, and ASL interpretation. • We introduced new music education residencies in rural Jones County, with the support of the Simple Gifts Fund; and in Dare County’s Outer Banks, with the support of the Bryan Cultural Series and the Outer Banks Community Foundation. Residencies allow NCS musicians to deepen our impact, with numerous music education opportunities and performances for residents of all ages.

“This concert was a dream come true. Our daughter loves music, but we never thought a symphony would be possible for her. Thank you for making it possible.” –JAMES AND JESS S., PARENTS

• Funded by PNC’s Grow Up Great, our Music Discovery program—typically held in libraries and preschool classrooms—added visits to homeless shelters and service organizations such as Family Promise of Wake County, Durham Rescue Mission, and Book Harvest of Durham.

MUSIC EDUCATION VIRTUALLY ANYWHERE! Without missing a beat, each component of our education program went virtual. (And, with these programs available online, many adults are expanding their musical knowledge, too!) EDUCATION CONCERTS

A Virtual Education Concert, released with an online workbook and lesson plans, taught 4th and 5th graders the core elements of music.

ENSEMBLES IN THE SCHOOLS

Our Ensembles in the HOME Schools videos demonstrated how different instruments work together to make music.

“I am very impressed with the Ensembles in the HOME Schools videos. They are not only educational, but they also give the viewers an intimate, personal, and engaging connection to individual musicians of the orchestra.” –KATHY HOPKINS, RECENTLY RETIRED ELEMENTARY MUSIC SPECIALIST, WAKE COUNTY

Preschoolers and their families heard storybooks about music and sang along with NCS musicians at Virtual Music Discovery programs over Zoom, funded by PNC’s Grow Up Great. INSTRUMENT ZOOS

With the support of MetLife Foundation, we piloted a Meet the Instruments! video series to introduce the instruments of the orchestra and the musicians who play them.

“The ‘Meet the Timpani’ video is great! I can see how much this will benefit our music teachers.” —CHRISTINE WHITE, ARTS COORDINATOR, WAYNE COUNTY PUBLIC SCHOOLS

CONTINUED CREATIVITY A January program at Raleigh’s Holy Name of Jesus Cathedral, performed for a sold-out crowd, brilliantly played to the venue’s unique acoustics—the timpani echoed majestically; the organ soared from the loft; and the strings, for one work, were positioned to surround the audience with sound from all angles. At that performance, Elgar’s tender Serenade for Strings was captured in a recording that, thanks to the technology of a 360 camera, allows for close-up views of the orchestra. As social distancing became the new way of life in the spring, we released the video to create a special moment of unity through music.

Music Resounds FOR NORTH CAROLINA “There was so much to admire about the latest concert of the North Carolina Symphony that it’s hard to know where to start.” —JOHN LAMBERT, CVNC, OCTOBER 2019

No matter the circumstances, the artistic excellence of the North Carolina Symphony remains constant.

NEWSWORTHY NOTES In October 2019, NCS made headlines with our Pops Season opener, starring Leslie Odom, Jr., of Hamilton fame. “There’s something about that collaboration, all those great musicians on stage,” said Odom, Jr., speaking to WRAL about why he loves performing with the Symphony. After the pandemic began, the media focused on the Symphony’s dedication to keeping the music playing. “There was no question that we would still try to reach our audience virtually,” NCS cellist David Meyer told CBS 17. “Music is the currency of the human spirit.”

“…a tight, technically sound, and emotionally satisfying performance which the full-house audience responded to vigorously.”

From the Cirque de Noel shows that ushered in the holiday season over Thanksgiving weekend to the timeless, romantic voice of Johnny Mathis over Valentine’s Day weekend, the Symphony provided a soundtrack to celebrations for many North Carolinians.

“…balm for the heart and soul at the end of another intense stay-at-home workday.” —BOB S., YOUTUBE, APRIL 2020

Even when in-person concerts were no longer possible, NCS continued to share festive music—for Independence Day, our violists dressed up in their patriotic red, white, and blue to record a performance of the Star-Spangled Brandenburg by North Carolina’s own Terry Mizesko—complete with virtual fireworks!

SHIFTING THE SPOTLIGHT Pianists Stephen Hough and Natasha Paremski and violinist James Ehnes were a few of the star soloists we welcomed to our stages for spectacular collaborations with the orchestra during the 2019/20 season. Then, NCS musicians became their own collaborators in imaginative “From Our Homes to Yours” video performances—Principal Clarinet Samuel Almaguer, for example, performed all four parts of a clarinet quartet, and Assistant Principal Trombone Jonathan Randazzo hilariously teamed up with his “long lost twin” (himself!) for a trombone duet.

Your support makes the Symphony’s music possible. Thank you! SUPPORTERS STEP UP Throughout the season, music lovers across our state humbled us with their generosity—and when the pandemic began, our audience’s dedication to the music shone brighter than ever. Ticket-holders donated $265,000 in ticket purchases for concerts that could not take place, and 33% of donors increased their gifts compared to last season, providing an extra boost of support during an especially challenging year.

NCS musicians Erin Zehngut, Rajesh Prasad, and Seth Horner spoke at a luncheon for Musicians’ Circle guests (those who made gifts of $1,000 or more).

At the beginning of the season, we opened our new donor lounge at the Wilson Center in Wilmington.

Special events are a favorite way to say “thank you” to the Symphony’s generous friends— providing opportunities for NCS donors to connect with our NCS musicians and with each other. In February, we held a recital and reception for our Concertmaster’s Circle friends (those who made gifts of $5,000 or more), featuring an intimate performance by a string quartet of Symphony musicians. In June, more than 60 screens signed on to Zoom for our first-ever virtual donor event, hosted by violinist Jacqueline Saed Wolborsky and guest-starring her two young children as artistic collaborators!

Before the pandemic entered our reality, NCS was on its way to record-breaking final figures for ticket sales and fundraising. The Symphony responded quickly to COVID-19 by significantly reducing expenses—and thanks to the extraordinary generosity of the community, the State of North Carolina, and our corporate and foundation supporters, we were able to finish the year with a much smaller deficit than we otherwise would have.

as a Percentage of the Total Operating Budget

The Symphony drew in large and diverse audiences— live in concert halls and online with digital content. • We achieved record-breaking sales numbers for subscription ticket purchases and for holiday concert ticket purchases. • We extended free tickets to

under-served members of our community through partner organizations such as Helping Hands Mission, Southeast Raleigh Promise, TROSA, Family Promise of Moore County, and others.

• Even as of March 1, pre-pandemic, the number of new NCS ticket buyers had surpassed last year’s count of new ticket buyers.

as a Percentage of the Total Operating Budget

• When the pandemic began, NCS continued to engage audiences and make music accessible through more than two-dozen video performances and other virtual offerings—reaching

all 50 states and more than 100 countries around the world.

Fiscal Responsibility FOR THE FUTURE

NEW HANOVER: Our string quartet visited and performed for middle and high school students at Girls Leadership Academy of Wilmington.

WAYNE: As has been tradition for nearly 20 years, we began our holiday concert season in Goldsboro, following the town’s tree lighting ceremony.

Through our virtual offerings, the Symphony’s reach spanned all 50 U.S. states and around the globe.

LIFETIME TRUSTEES The Society and Foundation Boards gratefully recognize the individuals listed below as Lifetime Trustees for extraordinary involvement and leadership of the Symphony over a significant period of time. Dr. Assad Meymandi, 2015 Inductee Mr. Edward O. Woolner, 2016 Inductee

THANK YOU! Thank you to the generous individuals, businesses, foundations, and community partners who support the North Carolina Symphony through contributions each season. The successes highlighted in this report, including our extensive music education program, community engagement initiatives, and continued artistic excellence, are made possible by your support.