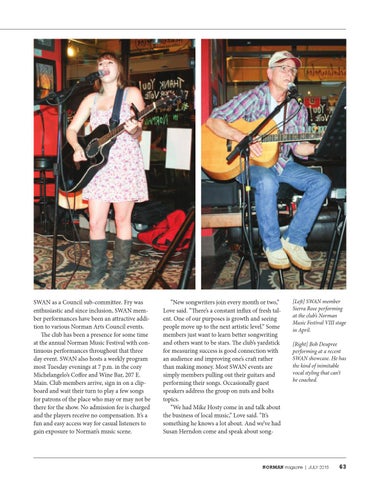 SWAN as a Council sub-committee. Fry was enthusiastic and since inclusion, SWAN member performances have been an attractive addition to various Norman Arts Council events. The club has been a presence for some time at the annual Norman Music Festival with continuous performances throughout that three day event. SWAN also hosts a weekly program most Tuesday evenings at 7 p.m. in the cozy Michelangelo’s Coffee and Wine Bar, 207 E. Main. Club members arrive, sign in on a clipboard and wait their turn to play a few songs for patrons of the place who may or may not be there for the show. No admission fee is charged and the players receive no compensation. It’s a fun and easy access way for casual listeners to gain exposure to Norman’s music scene.

“New songwriters join every month or two,” Love said. “There’s a constant influx of fresh talent. One of our purposes is growth and seeing people move up to the next artistic level.” Some members just want to learn better songwriting and others want to be stars. The club’s yardstick for measuring success is good connection with an audience and improving one’s craft rather than making money. Most SWAN events are simply members pulling out their guitars and performing their songs. Occasionally guest speakers address the group on nuts and bolts topics. “We had Mike Hosty come in and talk about the business of local music,” Love said. “It’s something he knows a lot about. And we’ve had Susan Herndon come and speak about song- 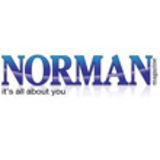