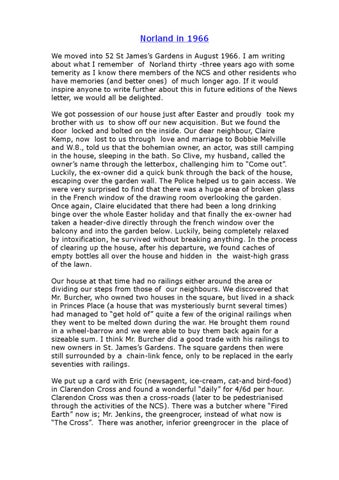 Norland in 1966 We moved into 52 St James’s Gardens in August 1966. I am writing about what I remember of Norland thirty -three years ago with some temerity as I know there members of the NCS and other residents who have memories (and better ones) of much longer ago. If it would inspire anyone to write further about this in future editions of the News letter, we would all be delighted. We got possession of our house just after Easter and proudly took my brother with us to show off our new acquisition. But we found the door locked and bolted on the inside. Our dear neighbour, Claire Kemp, now lost to us through love and marriage to Bobbie Melville and W.8., told us that the bohemian owner, an actor, was still camping in the house, sleeping in the bath. So Clive, my husband, called the owner’s name through the letterbox, challenging him to “Come out”. Luckily, the ex-owner did a quick bunk through the back of the house, escaping over the garden wall. The Police helped us to gain access. We were very surprised to find that there was a huge area of broken glass in the French window of the drawing room overlooking the garden. Once again, Claire elucidated that there had been a long drinking binge over the whole Easter holiday and that finally the ex-owner had taken a header-dive directly through the french window over the balcony and into the garden below. Luckily, being completely relaxed by intoxification, he survived without breaking anything. In the process of clearing up the house, after his departure, we found caches of empty bottles all over the house and hidden in the waist-high grass of the lawn. Our house at that time had no railings either around the area or dividing our steps from those of our neighbours. We discovered that Mr. Burcher, who owned two houses in the square, but lived in a shack in Princes Place (a house that was mysteriously burnt several times) had managed to “get hold of” quite a few of the original railings when they went to be melted down during the war. He brought them round in a wheel-barrow and we were able to buy them back again for a sizeable sum. I think Mr. Burcher did a good trade with his railings to new owners in St. James’s Gardens. The square gardens then were still surrounded by a chain-link fence, only to be replaced in the early seventies with railings. We put up a card with Eric (newsagent, ice-cream, cat-and bird-food) in Clarendon Cross and found a wonderful “daily” for 4/6d per hour. Clarendon Cross was then a cross-roads (later to be pedestrianised through the activities of the NCS). There was a butcher where “Fired Earth” now is; Mr. Jenkins, the greengrocer, instead of what now is “The Cross”. There was another, inferior greengrocer in the place of 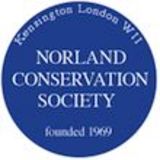