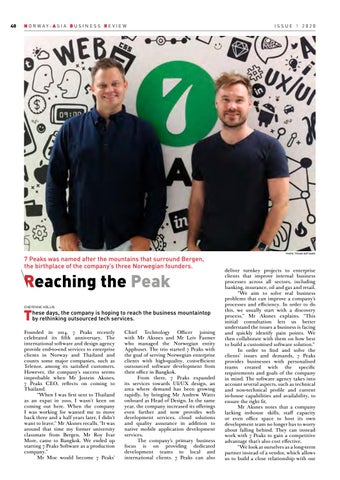 7 Peaks was named after the mountains that surround Bergen, the birthplace of the company’s three Norwegian founders.

days, the company is hoping to reach the business mountaintop These by rethinking outsourced tech services. CHEYENNE HOLLIS

Founded in 2014, 7 Peaks recently celebrated its fifth anniversary. The international software and design agency provide end-to-end services to enterprise clients in Norway and Thailand and counts some major companies, such as Telenor, among its satisfied customers. However, the company’s success seems improbable when Mr Jostein Aksnes, 7 Peaks CEO, reflects on coming to Thailand. “When I was first sent to Thailand as an expat in 2010, I wasn’t keen on coming out here. When the company I was working for wanted me to move back three and a half years later, I didn’t want to leave,” Mr Aksnes recalls. “It was around that time my former university classmate from Bergen, Mr Roy Ivar More, came to Bangkok. We ended up starting 7 Peaks Software as a production company.” Mr Moe would become 7 Peaks’

Chief Technology Officer joining with Mr Aksnes and Mr Leiv Fasmer who managed the Norwegian entity Apphuset. The trio started 7 Peaks with the goal of serving Norwegian enterprise clients with high-quality, cost-efficient outsourced software development from their office in Bangkok. From there, 7 Peaks expanded its services towards UI/UX design, an area where demand has been growing rapidly, by bringing Mr Andrew Watts onboard as Head of Design. In the same year, the company increased its offerings even further and now provides web development services, cloud solutions and quality assurance in addition to native mobile application development services. The company’s primary business focus is on providing dedicated development teams to local and international clients. 7 Peaks can also

deliver turnkey projects to enterprise clients that improve internal business processes across all sectors, including banking, insurance, oil and gas and retail. “We aim to solve real business problems that can improve a company’s processes and efficiency. In order to do this, we usually start with a discovery process,” Mr Aksnes explains. “This initial consultation lets us better understand the issues a business is facing and quickly identify pain points. We then collaborate with them on how best to build a customised software solution.” In order to find and solve the clients’ issues and demands, 7 Peaks provides businesses with personalised teams created with the specific requirements and goals of the company in mind. The software agency takes into account several aspects, such as technical and non-technical profile and current in-house capabilities and availability, to ensure the right fit. Mr Aksnes notes that a company lacking in-house skills, staff capacity or even office space to host its own development team no longer has to worry about falling behind. They can instead work with 7 Peaks to gain a competitive advantage that’s also cost effective. “We look at ourselves as a long-term partner instead of a vendor, which allows us to build a close relationship with our 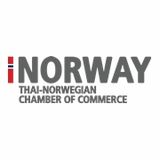