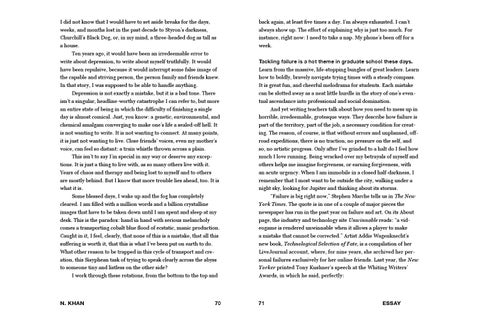 I did not know that I would have to set aside breaks for the days, weeks, and months lost in the past decade to Styron’s darkness, Churchill’s Black Dog, or, in my mind, a three-headed dog as tall as a house. Ten years ago, it would have been an irredeemable error to

back again, at least five times a day. I’m always exhausted. I can’t always show up. The effort of explaining why is just too much. For instance, right now: I need to take a nap. My phone’s been off for a week.

write about depression, to write about myself truthfully. It would have been repulsive, because it would interrupt some false image of the capable and striving person, the person family and friends knew. In that story, I was supposed to be able to handle anything. Depression is not exactly a mistake, but it is a bad tone. There isn’t a singular, headline-worthy catastrophe I can refer to, but more an entire state of being in which the difficulty of finishing a single day is almost comical. Just, you know: a genetic, environmental, and chemical amalgam converging to make one’s life a sealed-off hell. It is not wanting to write. It is not wanting to connect. At many points, it is just not wanting to live. Close friends’ voices, even my mother’s voice, can feel so distant: a train whistle thrown across a plain. This isn’t to say I’m special in any way or deserve any exceptions. It is just a thing to live with, as so many others live with it. Years of chaos and therapy and being lost to myself and to others are mostly behind. But I know that more trouble lies ahead, too. It is what it is. Some blessed days, I wake up and the fog has completely cleared. I am filled with a million words and a billion crystalline images that have to be taken down until I am spent and sleep at my desk. This is the paradox: hand in hand with serious melancholy comes a transporting cobalt blue flood of ecstatic, manic production. Caught in it, I feel, clearly, that none of this is a mistake, that all this suffering is worth it, that this is what I’ve been put on earth to do. What other reason to be trapped in this cycle of transport and creation, this Sisyphean task of trying to speak clearly across the abyss to someone tiny and listless on the other side? I work through these rotations, from the bottom to the top and

Tackling failure is a hot theme in graduate school these days. Learn from the massive, life-stopping bungles of great leaders. Learn how to boldly, bravely navigate trying times with a steady compass. It is great fun, and cheerful melodrama for students. Each mistake can be slotted away as a neat little hurdle in the story of one’s eventual ascendance into professional and social domination. And yet writing teachers talk about how you need to mess up in horrible, irredeemable, grotesque ways. They describe how failure is part of the territory, part of the job, a necessary condition for creating. The reason, of course, is that without errors and unplanned, offroad expeditions, there is no traction, no pressure on the self, and so, no artistic progress. Only after I’ve grinded to a halt do I feel how much I love running. Being wracked over my betrayals of myself and others helps me imagine forgiveness, or earning forgiveness, with an acute urgency. When I am immobile in a closed half-darkness, I remember that I most want to be outside the city, walking under a night sky, looking for Jupiter and thinking about its storms. “Failure is big right now,” Stephen Marche tells us in The New York Times. The quote is in one of a couple of major pieces the newspaper has run in the past year on failure and art. On its About page, the industry and technology site Unwinnable reads: “a videogame is rendered unwinnable when it allows a player to make a mistake that cannot be corrected.” Artist Addie Wagenknecht’s new book, Technological Selection of Fate, is a compilation of her LiveJournal account, where, for nine years, she archived her personal failures exclusively for her online friends. Last year, the New Yorker printed Tony Kushner’s speech at the Whiting Writers’ Awards, in which he said, perfectly: