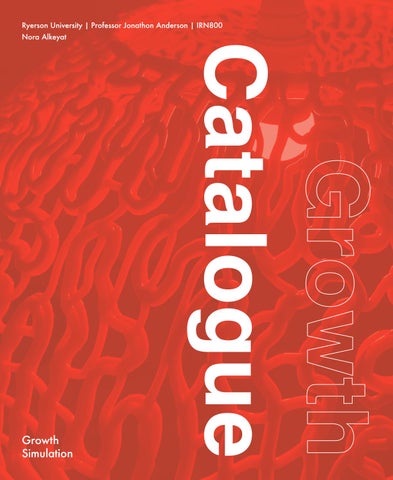 &quot;This studio seeks to build on recent advancements by examining the ways in which robotic arms have come to be seen as transcending their traditional role as performers of the monotonous tasks of mass manufacturing pipelines and instead be viewed as part of the toolset available for the production of crafted and unique work. These factors combined challenge analogue and lowtech design conventions to reconsider the entire design-to-production process, where the realities of innovative processes and solutions only seem to expand.&quot;

Explore large scale 3D printing of furniture or interior objects using an industrial robotic arm and custom end of arm tooling. You are free to explore any type of furniture or object but must keep in mind the design constraints below. This project is open ended to allow you the freedom to direct and explore.

The following project has been accomplished under the support of the following resources, affiliations, equiment and software.

+ Rhinoceros 3D Rhinoceros geometry is based on the NURBS mathematical model, which focuses on producing mathematically precise representation of curves and freeform surfaces in computer graphics (as opposed to polygon mesh-based applications). + Grasshopper Plug-in Grasshopper is a visual programming language and environment that runs within the Rhinoceros 3D computer-aided design (CAD) application. Grasshopper is primarily used to build generative algorithms, such as for generative art. Many of Grasshopper&#39;s components create 3D geometry.

&quot;Growth&quot; is a design project that examines the natural simulation process by methods of robotic 3D printing. In nature, simulation processes are observable in the brain coral species witnessed in the faviidae brain coral species. Taking inspiration from the intriguing patterns witnessed in this species, the design pushes the boundaries of robotic 3D printing while exploring the possibilities of reaction diffusion simulation. By developing various patterns projected on a substrate, this project explores the potential of printing parametric environmental patterns onto surfaces. The research will take the approach of utilizing 8-Axis KUKA PRC 150 Robotic 3D Printing to explore and fabricate the patterning index of Reaction Diffusion Theory on to a domed substrate. This experimentational study will involve formwork development, pattern simulation-formation and pushing the boundaries of the hardware technology to effectively achieve a successful variety of patterns of prints on a substrate.

Faviidae Brain Coral Brain Named because of this coral&#39;s spheroid shape and grooved surface which resembles an animal brain. The life span of the largest brain corals is 900 years. Colonies can grow as large as 6 or more feet (1.8 m) high. Underwater boulder brain coral Colpophyllia natans Colpophyllia natans is a dominant reef-building coral with wide meandering valleys stretching across the entire surface of the coral colony. This coral forms impressive domed boulders and is one of the most common corals in the Caribbean. The boulder brain coral is a familiar species on shallow reef ledges and slopes. It can be found down to a depth of 165 feet but is often established much closer to the surface.

&quot;Rethinking Artificial Reef Structures through 3D Clay Printing&quot; The reef tiles were 3D-printed using reef-safe terracotta, using a robotic 3D clay printing method before firing each piece to eventually be seeded with coral fragments. The finished pieces were then introduced within three selected sites across the Hoi Ha Wan Marine Park in Hong Kong waters. The tiles were tested in a simulated environment where they have been growing. since the successful trial, the team has printed 128 more clay tiles. the researchers will monitor the coral regrowth in the next years and they project that at least a 40-square-meter area of coral habitat will be restored. The team of marine biologists and architects has thus developed a series of 3D printed terracotta reef structures to assist in coral restoration, providing structurally complex substrates in a degraded area.

Form Scientist . Experimentation . Footwear Design. Fully functional 3D printed footwear. Single material, no glue, no assembly and most importantly recyclable. This porject informed my curve simulation development and gave me a practical outlook towards the application of the reaction simulation grown on a substrate.

Neri Oxman and members of the Mediated Matter group at MIT Media Lab an interdisciplinary research department at the Massachusetts Institute of Technology collaborated with 3D printing company Stratasys to create structures with varied rigidity, opacity and colour. The team used an Objet500 Connex3 Color, Multi-material 3D Production System to 3D print the &quot;skins&quot; in a range of plastics with different densities each one suited to a different planet in the Earth&#39;s solar system.

As designers, we have always taken inspiration from and imitated the observed results of nature. Designers are able to borrow the processes that create those results. Reaction diffusion is one of the creation processes of nature. Within nature, many living organisms simulate patterns that form as a result of chemical reactions. This project explores biomimicry in design with an algorithm that borrows the Reaction Diffusion simulation process. It tells the conceptual narrative of an underwater boulder brain coral Colpophyllia natans and faviidae coral representation. The various simulation forms become an example of code-driven, generative design. It is achieved with the codes of algorithms that allows curves to grow on a surface. Key Takeaways + Pattern formation in Chemical systems + Grid of points on the surface - substrate + Each simulation feeds into the next state + Each cell samples its neighbourhood and computes a function on the neighbour values, usually continuous + Concentration of chemicals + Consists of the growth of new phases due to atomic diffusion.

The framework of developing the curve patterns depends on working among three types of design development. The three phases consists of the indivudal curve, the layered curves offset of the dome and the extruded curve to visually communicate the outcome of the simulation.

The process of designing a form using the reaction diffusion simulation heavily relied on the outcome of the growth simulation. This process took the entirety of the semester to develop and settle on a pattern that displays a balanced appearance of density, curvelinear strength, balance, curves and overall diversity among the entirety of the pattern.

The process of the growth is diagrammed in four phases. The growth is simulationed by a base logic curve that is projected onto the base substrate and then activated and run into the desired growth density and length. The key is to ensure no two curves touch, overlap or grow beyond the substrate dome.

This phase of the projects builds on the ideas, experiementation and reasearch to form a further developed design ideation for the final project.

PROJECTED BASE LOGIC ONTO DOME SUBSTRATE

The following is the final base logic projected onto the substrate dome. The origin logic must be one continous line that has two open ends - a start point and end point.

This intital protype print allowed us to quite literally, unravel, a series of issues, insight, and sucesses to move forward with the final design development. Challenges: 1. Timing of the line is not a perfect 5mm or avoid the top peaks as much as possible - tooling at the top - cut off top of dome 4cm deep. 2. Falls apart - Create simulation more dense. Through this exploration we found that the continous print could not physical ly hold itself. Once picked up from the dome, it unravelled and did not have the structural support to maintain form.

A vital step in the process, the fabrication phase allowed for the execution of the main components and factors of the project. It also set the stage for an imperative moment of the project - the utilization of all 8-Axis of Freedom on KUKA150. With all these in mind the fabrication phase initially began in March with the dome being CNC&#39;d and milled out of sliced sheets of plywood. Following came a test prototype print which set the tone for upcoming issues to resolve. Lastly, setting up proper offset print files, and coming up with a few prototypes resulted in a intricately final simulated object.

CNC circle slices out of plywood Plywood 12.5mm Lay rings out on a 5ft by 5ft sheet

Assemblage The assembly process began with taking the indivdual cut pieces of plywood and staggering them in hierarchial order.

Using the KUKA 150 arm and milling tool, the dome was place on the turn table in a calcaulated cordiate and space and utilzing the all 8 axis&#39;s of freedom, including the E1 KL4000 Linear rail 7th axis track and the E2 8th axis turntable. This project took the staggered stacked slices of plywood circles and milled the edges to be a final smooth dome.

Locating three cordinates in space directly on the dome substrate was crucial to aligning the truncated dome to the simulation and ensuring the tool arm does not run into the wooden dome so that the process of printing was controlled,accurated and smooth. The dome had to raised on on a platfrom to ensure the toolarm does not collide into the turntable level.

Solution Inorder for the pattern to print, an imperative part of printing on a dome substrate was to utilize all Axis of the robot. When the Dome remains static, the robot has difficulty accessing all sides without complications. Inidcated in the grasshopper script in the image above, Professor Jonathon Anderson assisted in creating a script that utiilizes a the 8th Axis turntable to allow minimal movement of the robot and rather the dome making itself accessible by rotating.

02. offset by 2mm Layer 01 from GLOBAL centre OF dome Section

The fabrication process utilized the 8th Axis of freedom also reffered to as the E2 Turntable, allowing the robot to easily access all sides of the dome. This turned the dome while it prints, making all sides and edges as accessible as possible, simultanously using the 7th Axis - E1 Linear track.

6-Axis of Freedom Point in the World X Direction - Forward and Back Y Direction - Left to Right Z Direction - Up and down Directionality A Rotation - X B Rotation - Y C Rotation - C Each points stays perpendicular to the normal of the surface. So that not only do we see the robot move around but we&#39;re seeing the X,Y,Z plane is normal to the surface at every spot.

This final chapter showcases the result of the printed pattern simulations occupying the function of an artifical light fixture. There were a total of four final prints, printed in clear, black, blue and red. Each exemplifiying their own spatial qualities, shadows, reflections and piercings of lights when part of a space.

Learning from the geometries and intricacies of nature has always intrigued me as a designer. This project went beyond proving the potential capabilities in the future of Robotic 3D printing within the world of design. Creating design solutions, simulated visual interest while also learning from nature and playing with geometries has allowed this project to be an exciting and creative endeavour. From the successful outcome of this very controlled project, I aspire this exploration to spark creativity and inspiration towards future students and designers while also being a stepping stone towards the next potentials and endeavours of Robotic printing and efficiency in design. ” Cab ipsuntium enis ut rem voluption natiaerchil eum serit fuga. Unt quiae nis &quot;To gain growth from Growth.&quot;