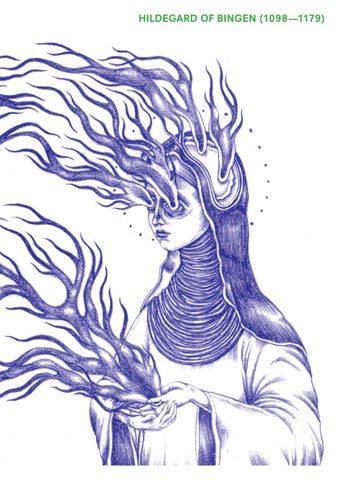 Sources of Evangelical Spirituality are not books &amp; publications arenotbooks.com

very important line of German mystics that includes Eckhart, Suso, Tauler, and the early evangelical Jacob Boehme.1 She was an artist, musician, poet, and a writer on medical, scientific, and ecological topics. Green, productive nature is central to Hildegard’s spirituality. “Noble Viriditas,” is described as: “O most noble greenness, you whose roots are in the sun and who shine in bright serenity in a wheel that no earthly eminence can comprehend.”2 Terence McKenna interprets Hildegard’s “greenness” like this: Inwardness is the characteristic feature of the vegetable rather than the animal approach to existence. The animals move, migrate, and swarm, while plants hold fast. Plants live in a dimension characterized by the solid state, the fixed, and the enduring. Awareness of the green side of mind was called Viriditas by the twelfth-century visionary Hildegard von Bingen.3

But it is Hildegard’s role as a visual artist concerns us here—we have chosen to excerpt many of her images in addition to a short text (oppostite). According to Bernard McGinn, “theology,” for Hildegard, “is as much visual as verbal—neither side can be neglected in trying to gain an understanding of her teaching.”4 1. On Hildegard’s influence, see “Rhenish Confluences,” in Maud Burnett McInerney, editor, Hildegard of Bingen: A Book of Essays (New York: Routledge, 2014 [1998] ), pp. 179–180. 2. Quoted in “The Greenness,” by Piotr Sadowski, The Knight on His Quest: Symbolic Patterns of Transition in Sir Gawain and the Green Knight (Newark, DE: University of Delaware Press, 1996), p. 94. 3. Terence McKenna, “Plan / Plant / Planet,” in Whole Earth Review: Access to Tools and Ideas No. 64 (Fall 1989). p. 8. 4. Bernard McGinn, “Theologians as Trinitarian Iconographers,” in Hamburger &amp; Bouché, The Mind’s Eye: Art and Theological Argument in the Middle Ages (Princeton, NJ: Princeton Univ. Press, 2006), pp. 186–207.

from Scivias, “Know the Ways of the Lord” He causeth the grass to grow for the cattle, and herb for the service of man: that he may bring forth food out of the earth; And wine that maketh glad the heart of man, and oil to make his face to shine, and bread which strengtheneth man’s heart. The trees of the Lord are full of sap; the cedars of Lebanon, which he hath planted; Where the birds make their nests: as for the stork, the fir trees are her house. —Psalm 104:14–17

analogy of a tree to the soul

he soul in the body is like sap in a tree, and the soul’s powers are like the form of the tree. How? The intellect [spiritual intuition, direct perception] in the soul is like the greenery of the tree’s branches and leaves, the will like its flowers, the mind like its bursting firstfruits, the reason like the perfected mature fruit, and the senses like its size and shape. And so a person’s body is strengthened and sustained by the soul. Hence, O human, understand what you are in your soul, you who lay aside your good intellect [spiritual intuition, direct perception] and try to liken yourself to the brutes.5 ... O noble verdure, which grows from the Sun of splendor! Your clear serenity shines in the Wheel of the Godhead, Your greatness is past all earthly understanding.6

“Inwardness is the characteristic feature of the vegetable rather than the animal approach to existence. The animals move, migrate, and swarm, while plants hold fast. Plants live in a dimension characterized by the solid state, the fixed, and the enduring. Awareness of the green side of mind was called Viriditas by the twelfth-century visionary Hildegard von Bingen.”

preacher, philosopher, and mystical theologian. He is a giant in the tradition of apophatic, or negative, theology. Eckhart’s influence on evangelicalism is directly attributable to his association with the German school of “Rhineland mystics”—including Hildegard of Bingen;1 the Beguines Hadewijch, Mechtilde of Magdeburg, and Marguerite Porete; John Tauler; Jan Van Ruusbroec; Henry Suso; Nicholas of Cusa; and the author of the Theologia Germanica. This tradition was very influential on Martin Luther, the German Pietists, and on English spirituality in the time of John Wesley and William Law.2 Eckhart emphasizes the ontological meaning of Matthew 16:25, “For whosoever will save his life shall lose it: and whosoever will lose his life for my sake shall find it.” Only in loving God, can the individual subject begin to lose itslef in the non-being, or beyond-being, of the Godhead. The soul, in other words, can only be born, and thus the individual be “born again,” when it emerges out of human poverty, detachment (abegescheidenheit)3 and God’s productive, pregnant nothingness. In his sermon on detachment, Eckhart writes:

And when I search the Scriptures thoroughly, as far as my reason can fathom and know, I find that pure detachment stands above all things, for all virtues pay some regard to the creatures, yet detachment is free from all creatures. Hence it was that our Lord said to Martha: “One thing is needful,” that is to say, he who wishes to be untroubled and pure must have one thing, namely detachment. The teachers praise love most highly, as saint Paul does when he says: “In whatever tribulation I may find myself, if I have not love, I am nothing.” But I praise detachment more than all love.4

Another key biblical text for Eckhart is Matthew 5:3, “Blessed are the poor in spirit: for theirs is the kingdom of heaven.” His sermon on spiritual poverty extends his teaching on love and the intellect. Bernard McGinn summarizes: “love unites us with God in work and intellect [spiritual intuition, direct perception] unites us with God’s pure being, the divine ground lies much deeper.”5 Theologians question whether the kernel of eternal life lies more in the intellect [spiritual intuition, direct perception] or will. Will has two operations: desire and love. Intellect, with its simple function, is therefore better; its work is understanding, and it never stops until it gets a naked hold on what it sees. It runs ahead of will and tells it what to love. We desire a thing while as yet we do not possess it. When we have it, we love it: desire then falls away. When the spark of the intellect carries right into God, then the man is alive.6

Spiritual poverty (being “poor in spirit”) means letting go, even so far as reversing the process of creation: “stripping the creature of all that is created and returning it to its undifferentiated being in the divine. . . . The soul lives out of God only when it is itself groundless and withouth even a ‘place’ in which God can work, for the truly poor spirit is one whose ‘place’ is not his own but God’s.” 7 Eckhart’s emphasis on detachment as the “supreme human virtue,” John Milbank writes, “meant that he repudiated any specific spiritual ‘ways’ or ‘paths.’ No discipline is ever recommended by him—and in this respect he can be sharply distinguished from the late-medieval devotees of the Imitatio Christi and so forth.” Eckhart “clearly sought to close the gap between the laity and the religious elite,” but not in favor of a new, secular, middle-class bourgeoisie—“proudly but lightly read.” Instead, Eckhart “insists the highest mystical knowledge of Christ can be attained while working at an ordinary job or enoying oneself in an ordinary sensuous sort of way.”8

Meister Eckhart, Sermon Two: On Greenness, or “Viriditas” “Where is he who is born?” —Matthew 2:2

ow certain questions arise. First of all, since God is in all things as intelligence, and is more truly in them than they are in themselves, and more naturally, and since wherever God is there He must work, knowing Himself and speaking His Word—In what special respects, then, is the soul better fitted for this divine operation than are other rational creatures in which God also is? Pay attention to the explanation. God is in all things as being, as activity, as power. But He is fecund in the soul alone, for though every creature is a vestige of God, the soul is the natural image of God. This image must be adorned and perfected in this birth. No creature but the soul alone is receptive to this act, this birth. Indeed, such perfection as enters the soul, whether it be divine undivided light, grace, or bliss, must enter the soul through this birth, and in no other way. Just await this birth within you, and you shall experience all good and all comfort, all happiness, all being and all truth. If you miss it, you will miss all good and blessedness. Whatever comes to you in that will bring you pure being and stability; but whatever you seek or cleave to apart from this will perish—take it how you will and where you will, all will perish. This alone gives being—all else perishes.9

1st edition June 2018 Are Not Books, arenotbooks.com Are Not Books &amp; Publications are artistsâ&amp;#x20AC;&amp;#x2122; books published by the Are Not studioâ&amp;#x20AC;&amp;#x201D;a group of artists and designers who work in close collaboration. As artists and designers, not authorities, we are intellectually curious and thoroughly critical, but with no aspiration or pretense to anything like expertise or authority. Indeed, our goal is to remain anonymous, and to acquire no reputation. This print-on-demand edition was not really copyedited or proofread. Every reasonable attempt has been made to identify owners of copyright. Errors or omissions will be corrected in subsequent editions. Credits Drawing by Rebekah Brooks

Hildegard of Bingen (1098–1179) is the first in a line of "Rhineland" mystics that includes Eckhart, Suso, Tauler, and the early evangelical Jacob Boehme. 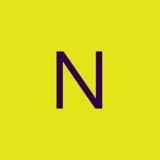 Are Not Books & the Nonnus Studio