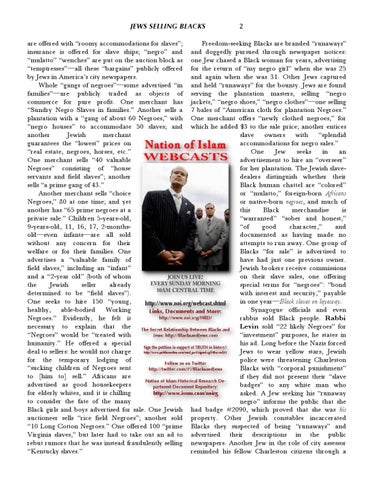 are offered with “roomy accommodations for slaves”; Freedom-seeking Blacks are branded “runaways” insurance is offered for slave ships; “negro” and and doggedly pursued through newspaper notices: “mulatto” “wenches” are put on the auction block as one Jew chased a Black woman for years, advertising “temptresses”—all these “bargains” publicly offered for the return of “my negro girl” when she was 25 by Jews in America’s city newspapers. and again when she was 31. Other Jews captured Whole “gangs of negroes”—some advertised “in and held “runaways” for the bounty. Jews are found families”—are publicly traded as objects of serving the plantation masters, selling “negro commerce for pure profit. One merchant has jackets,” “negro shoes,” “negro clothes”—one selling “Sundry Negro Slaves in families.” Another sells a 7 bales of “American cloth for plantation Negroes.” plantation with a “gang of about 60 Negroes,” with One merchant offers “newly clothed negroes,” for “negro houses” to accommodate 50 slaves; and which he added $3 to the sale price; another entices another Jewish merchant slave owners with “splendid guarantees the “lowest” prices on Nation of Islam accommodations for negro sales.” “real estate, negroes, horses, etc.” One Jew seeks in an WEBCASTS advertisement to hire an “overseer” One merchant sells “40 valuable Negroes” consisting of “house for her plantation. The Jewish slaveservants and field slaves”; another dealers distinguish whether their sells “a prime gang of 43.” Black human chattel are “colored” Another merchant sells “choice or “mulatto,” foreign-born Africans Negroes,” 80 at one time; and yet or native-born negroes, and much of another has “65 prime negroes at a this Black merchandise is private sale.” Children 5-years-old, “warranted” “sober and honest,” 9-years-old, 11, 16, 17, 2-months“of good character,” and old—even infants—are all sold documented as having made no without any concern for their attempts to run away. One group of welfare or for their families. One Blacks “for sale” is advertised to advertises a “valuable family of have had just one previous owner. field slaves,” including an “infant” Jewish brokers receive commissions and a “2-year old” (both of whom on their slave sales, one offering JOIN US LIVE! EVERY SUNDAY MORNING the Jewish seller already special terms for “negroes”: “bond 10AM CENTRAL TIME determined to be “field slaves”). with interest and security,” payable One seeks to hire 150 “young, in one year—Black slaves on layaway. http://www.noi.org/webcast.shtml healthy, able-bodied Working Synagogue officials and even Links, Documents and More: http://www.noi.org/HRD/ Negroes.” Evidently, he felt it rabbis sold Black people. Rabbi necessary to explain that the The Secret Relationship Between Blacks and Levin sold “22 likely Negroes” for “Negroes” would be “treated with Jews: http://BlacksandJews.com “investment” purposes, he states in humanity.” He offered a special his ad. Long before the Nazis forced Sign the petition in support of TRUTH in history!: http://www.petitiononline.com/mod_perl/signed.cgi?40acres&amp;51 deal to sellers: he would not charge Jews to wear yellow stars, Jewish for the temporary lodging of police were threatening Charleston Follow us on Twitter “sucking children of Negroes sent Blacks with “corporal punishment” http://twitter.com/#!/BlacksandJews to [him to] sell.” Africans are if they did not present their “slave Nation of Islam Historical Research Deadvertised as good housekeepers badges” to any white man who partment Document Repository: http://www.issuu.com/noirg for elderly whites, and it is chilling asked. A Jew seeking his “runaway to consider the fate of the many negro” informs the public that she Black girls and boys advertised for sale. One Jewish had badge #2090, which proved that she was his auctioneer sells “rice field Negroes”; another sold property. Other Jewish constables incarcerated “10 Long Cotton Negroes.” One offered 100 “prime Blacks they suspected of being “runaways” and Virginia slaves,” but later had to take out an ad to advertised their descriptions in the public rebut rumors that he was instead fraudulently selling newspapers. Another Jew in the role of city assessor “Kentucky slaves.” reminded his fellow Charleston citizens through a 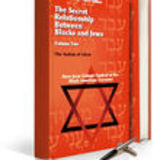