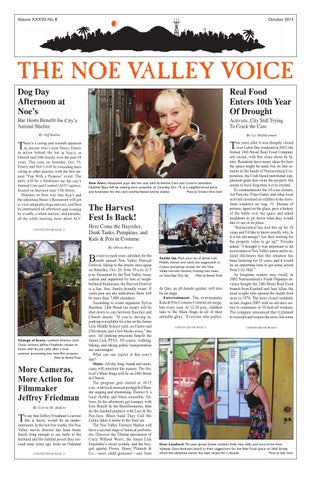 here’s a caring and warmth apparent to anyone who’s seen Nancy Emery in action behind the bar at Noe’s, at Church and 24th streets, over the past 24 years. This year, on Saturday, Oct. 19, Emery and Noe’s will be extending their caring to other species, with the first annual “Fun With a Purpose” event. The party will be a fundraiser for the city’s Animal Care and Control (ACC) agency, located on Harrison near 15th Street. Humans on their way into Noe’s and the adjoining Basso’s Restaurant will get to view adoptable dogs and cats, and then be entertained all afternoon and evening by a raffle, a silent auction, and karaoke, all the while learning more about ACC CONTINUED ON PAGE 11

de Qua, an all-female quintet, will also be on stage. Entertainment. The ever-popular Kids & Pets Costume Contests are megahits every year. At 12:30 p.m., children take to the Main Stage in all of their adorable glory. “Everyone who partici-

en years after it was abruptly closed over Labor Day weekend in 2003, the former 24th Street Real Food Company sits vacant, with few clues about its future. Residents have many ideas for how the space might be used, but its fate remains in the hands of Nutraceutical Corporation, the Utah-based nutritional supplement giant that owns the property but seems to have forgotten it ever existed. To commemorate the 10-year closure, Art Persyko, Peter Gabel, and other local activists mounted an exhibit on the storefront windows on Aug. 31. Dozens of posters, taped on the glass, gave a history of the battle over the space and asked neighbors to jot down what they would like to see in its place. “Nutraceutical has tied this up for 10 years and I'd like to know exactly why. Is it a tax advantage? Are they waiting for the property value to go up?” Persyko asked. “I thought it was important to let newcomers to Noe Valley know and to remind old-timers that this situation has been festering for 10 years, and it would be an opportune time to get some action from City Hall.” As longtime readers may recall, in 2002 Nutraceutical's Fresh Organics division bought the 24th Street Real Food branch from Kimball and Jane Allen, the local couple who opened the health food store in 1970. The store closed suddenly in late August 2003 with no advance notice to customers or 30 laid-off workers. The company announced that it planned to remodel and reopen the store, but some

Aww Alert. Adoptable pups like this one, held by Animal Care and Control attendant Heather Bays, will be seeking your sympathy on Saturday, Oct. 19, at a neighborhood party and fundraiser for the city’s overburdened animal shelter. Photo by Christina Ohm-Smith

The Harvest Fest Is Back!

o say that Jeffrey Friedman’s current life is hectic would be an understatement. In the last few weeks, the Noe Valley movie director has been home barely long enough to say hello to his husband and the faithful pooch they rescued nine years ago from an Oakland CONTINUED ON PAGE 13

e sure to mark your calendars for the ninth annual Noe Valley Harvest Festival, taking to the streets once again on Saturday, Oct. 26, from 10 a.m. to 5 p.m. Presented by the Noe Valley Association and supported by lots of neighborhood businesses, the Harvest Festival is a fun, free, family-friendly event. If years past are any indication, there will be more than 7,000 attendees. According to event organizer Sylvia Buettner, 24th Street (as usual) will be shut down to cars between Sanchez and Church streets. “If you’re driving in, parking is available for a fee on the James Lick Middle School yard, on Castro and 25th streets, just a few blocks away,” she says. All parking proceeds benefit the James Lick PTSA. Of course, walking, biking, and taking public transportation are encouraged. What can one expect at this year’s fair? Music. All day long, bands and musicians will entertain the masses. The festival’s Main Stage will be on 24th Street at Church. The program gets started at 10:15 a.m., with local musical protégé Kif Bender singing and strumming. District 8, a local rhythm and blues ensemble, follows. In the afternoon, get loungey with Erin Brazill & the Brazillionaires, then do the mashed potatoes with Luci & the Pee-Jays. Blues band They Call Me Lucky takes it home in the final set. The Noe Valley Farmers Market will have a second stage of musical performers. Discover the Tibetan percussion of Curry Without Worry, the James Lick Ensemble’s sweet sounds, and the boygirl quintet Flown. Henry Plotnick & Co.—more child geniuses!—and Vons

Saddle Up. Park your car at James Lick Middle School and catch the stagecoach at Castro and Jersey streets for the Noe Valley Harvest Festival, trotting into town on Saturday, Oct. 26. Photo by Beverly Tharp