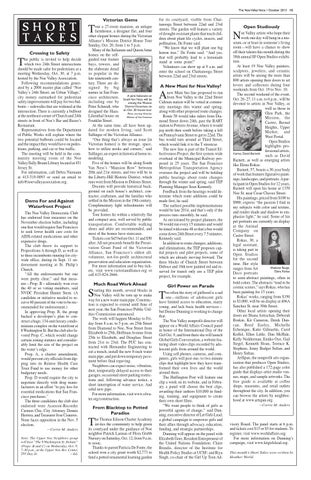 he public is invited to help decide which two 24th Street intersections should be made safer for pedestrians at a meeting Wednesday, Oct. 30, at 7 p.m. hosted by the Noe Valley Association. Following recommendations generated by a 2006 master plan called “Noe Valley’s 24th Street, an Urban Village,” city money earmarked for pedestrian safety improvements will pay for two bulbouts—sidewalks that are widened at the intersection. There is currently a bulbout at the northeast corner of Church and 24th streets in front of Noe’s Bar and Basso’s Restaurant.  Representatives from the Department of Public Works will explain where the two potential bulbouts could be located and the impact they would have on pedestrians, parking, and car or bus traffic. The meeting will be held in the community meeting room of the Noe Valley/Sally Brunn Library located at 451 Jersey St. For information, call Debra Niemann at 415-519-0093 or send an email to info@noevalleyassociation.org.

Dems For and Against Waterfront Project The Noe Valley Democratic Club has endorsed four measures on the November election ballot, including one that would require San Francisco to seek lower health care costs for AIDS-related medications and other expensive drugs. The club threw its support to Propositions A through D, as well as to three incumbents running for citywide office, during its Sept. 11 endorsement meeting at St. Philip’s Church. “All the endorsements but one were pretty clear,” and that measure—Prop. B—ultimately won over the 40 or so voting members, said NVDC President Hunter Stern. (A candidate or initiative needed to receive 60 percent of the vote to be recommended for endorsement.) In approving Prop. B, the group backed a developer’s plan to construct a huge, 134-unit luxury condominium complex on the waterfront at 8 Washington St. But the club also favored Prop. C, which would change certain zoning statutes and considerably limit the size of the project on the water’s edge. Prop. A, a charter amendment, would prevent city officials from dipping into its Retiree Health Care Trust Fund to use money for other budgetary needs. Prop. D would require the city to negotiate directly with drug manufacturers in an effort “to pay less for essential medications that San Francisco purchases.” The three candidates the club also endorsed were Assessor-Recorder Carmen Chu, City Attorney Dennis Herrera, and Treasurer Jose Cisneros. None faces opposition in the Nov. 5 election. —Corrie M. Anders Note: The Upper Noe Neighbors group will host “The 8 Washington St. Debate” (Props. B and C) on Wednesday, Oct. 9, 7:30 p.m., at the Upper Noe Rec Center, 295 Day St. —Ed.

our a 27-room mansion, an antique farmhouse, a designer flat, and four other elegant homes during the Victorian Alliance’s Mission District House Tour Sunday, Oct. 20, from 1 to 5 p.m. Many of the Italianate and Queen Anne homes on the selfguided tour feature bays, towers, and the elaborate detail so popular in the late nineteenth century. Three are designed by big names in San FranA pink Italianate on cisco architecture, South Van Ness will be including one by among the Mission District Victorians on Peter Schmidt, who designed the Haas- an Oct. 20 house tour. Photo courtesy Victorian Lilienthal house on Alliance of San Francisco Franklin Street. At the same time, all have been updated for modern living, said Scott Sallinger of the Victorian Alliance. “One thing that’s always an issue [in Victorian homes] is the storage, space, how to utilize nooks and corners,” said Sallinger, an expert in historical home remodeling. Five of the homes will be along South Van Ness’s “Mansion Row” between 20th and 21st streets, and two will be in the Liberty-Hill Historic District, which runs west from Mission to Dolores Street. Docents will provide historical background on each house’s architect, contractor, craftsmen, and the families who settled in the Mission in the 19th century. Complimentary light refreshments will be provided. Tour homes lie within a relatively flat and compact area, well served by public transportation. Comfortable walking shoes and attire are recommended, and most of the homes have staircases. Tickets cost $45 before Oct. 11 and $50 after. All net proceeds benefit the Preservation Grant Fund of the Victorian Alliance, San Francisco’s oldest allvolunteer, not-for-profit architectural preservation and education organization. For more information and to buy tickets, visit www.victorianalliance.org or call 415-824-2666.

for its courtyard, visible from Chattanooga Street between 22nd and 23rd streets. The garden will feature a variety of drought-resistant plants that teach children about plant life cycles, insects, and pollination, De Fonte said. “We know that we will plant one big lemon tree,” De Fonte said. “And yes, that will probably lead to a lemonade stand at some point!”  Volunteers can show up at 9 a.m. and enter the school on Chattanooga Street between 22nd and 23rd streets.

A New Muni for Noe Valley?

new Muni bus line proposed to run from Noe Valley to the 22nd Street Caltrain station will be vetted at community meetings this winter and spring, along with other proposed route changes. Route 58 would take riders from Diamond Street down 24th, past the BART station to Potrero Avenue, where it would jog north then south before taking a left on Pennsylvania Street to get to 22nd. The bus would turn around at Third Street, which would link it to the T streetcar. The new line is part of the Transit Effectiveness Project, the first system-wide overhaul of the Municipal Railway proposed in 25 years. The San Francisco Metropolitan Transportation Agency oversees the project and will be holding public hearings about route changes through the winter and spring, said TEP Planning Manager Sean Kennedy. Feedback from the hearings would determine which route additions could be made first, he said. The earliest possible implementations would be late 2014, and that’s only if the process runs smoothly, he said. As envisioned by project planners, the 58 would run every 15 minutes and would be timed with route 48 so that a bus would come down 24th Street every 7.5 minutes, Kennedy said. In addition to route changes, additions, and eliminations, the TEP proposes capital projects and pilot projects, some of which are already moving forward. The three blocks of Church Street between Duboce and 16th now painted red and reserved for transit only are a TEP pilot project, for example.

Much Road Work Ahead

tarting this month, several blocks in Noe Valley will be torn up to make way for a new water main pipe. Construction is expected to extend until June of next year, the San Francisco Public Utilities Commission announced. The work will happen Monday to Friday from 8 a.m. to 5 p.m. on 25th Street from Diamond to Noe, Noe Street from Elizabeth to 25th, Hoffman Avenue from 25th to Elizabeth, and Douglass Street from 21st to 23rd. The PUC has contracted with Hernandez Engineering to cut a trench, install the new 8-inch water main pipe, and put down temporary pavement before final repaving. Neighbors can expect noise, vibration, dust, temporarily delayed access to their garages, occasional street parking restrictions and, following advance notice, a short interruption of water service. And solid new pipe. For more information, visit www.sfwater.org/construction.

From Blacktop to Potted Paradise

he Thomas Edison Charter Academy invites the community to help green its courtyard under the guidance of Noe neighbor Patrick Lannan of Flora Grubb Nursery on Saturday, Oct. 12, from 9 a.m. to noon. Thanks to parent Patricia De Fonte, the school won a city grant worth $2,773 to fund a potted ornamental learning garden

oo often the story of girlhood is a sad one—millions of adolescent girls have limited access to education, marry young, and lack basic health services— but Denise Dunning is working to change that. The Noe Valley nonprofit director will appear on a World Affairs Council panel in honor of the International Day of the Girl Oct. 9, and from there she will launch Global Girls Conversation, a website featuring short video clips recorded by adolescent girls from around the world. Using cell phones, cameras, and computers, girls will post one- to two-minute clips that highlight how they have transformed their own lives and the world around them. The Huffington Post will feature one clip a week on its website, and in February a panel will choose the best clips, awarding their authors $10,000 in funding, training, and equipment to create their own short films. “We want people to think of girls as powerful agents of change,” said Dunning, executive director of Let Girls Lead, a global campaign to empower girls and their allies through advocacy, education, funding, and strategic partnerships. Dunning will appear on the panel with Elizabeth Gore, Resident Entrepreneur of the United Nations Foundation; Claire Brindis, director of the Institute for Health Policy Studies at UCSF; and Riya Singh, co-chair of the Girl Up Teen Ad-

oe Valley artists who hope their work one day will hang in a museum–or at least in someone’s living room—will have a chance to show off their talents this month during the 38th annual SF Open Studios exhibition. At least 19 Noe Valley painters, sculptors, jewelers, and ceramic artists will be among the more than 800 artists opening their doors to art lovers and collectors during four weekends from Oct. 19 to Nov. 10. The second weekend of the event, Oct. 26–27, 11 a.m. to 6 p.m., will be devoted to artists in Noe Valley, as well as those in Glen Park, the Mission, the Castro, Bernal Heights, Upper Market, and West Portal. Open Studios highlights professional artists, Karma, David Barnett such as David Barnett, as well as emerging artists like Elena Rokas. Barnett, 57, boasts a 30-year body of work that features figurative paintings, landscapes, and portraits. A participant in Open Studios for 12 years, Barnett will open his home at 1370 Noe St. near Cesar Chavez Street. His paintings, priced from $100 to $900, express “the passion I find in my subjects with color and texture, and render shade and shadow to emphasize light,” he said. Some of his pet portraits are currently on display at the Animal Company on Castro Street. Rokas, 30, a legal assistant, is taking part in Open Studios for the second time. Her style Madame Rouge, ranges from Art Elena Rokas Deco portraits to semi-abstract paintings, often in bold colors. The abstracts “tend to be cosmic scenes,” says Rokas, who has been painting for 15 years. Rokas’ works, ranging from $350 to $3,000, will be on display at 406A Sanchez St. near 30th Street. Other local artists opening their doors are Shana Astrachan, Deborah Boskin, Kit Cameron, Derek Duncan, Reed Easley, Michelle Echenique, Katie Gilmartin, Carol Koffel, Ellen Little, Dan McHale, Kelly Nedderman, Emiko Oye, Gail Siegel, Kenneth Sloan, Terence K. Stephens, Jenny Badger Sultan, and Henry Sultan. ArtSpan, the nonprofit arts organization that produces Open Studios, has also published a 172-page color guide that displays artist studio venues, maps, and sample artworks. The free guide is available at coffee shops, museums, and retail outlets throughout the city. In addition, you can browse the artists by neighborhood at www.artspan.org. —Corrie M. Anders

visory Board. The panel starts at 6 p.m. and tickets cost $15 or $5 for students. To register, visit www.worldaffairs.org For more information on Dunning’s campaign, visit www.letgirlslead.org. This month’s Short Takes were written by Heather World.