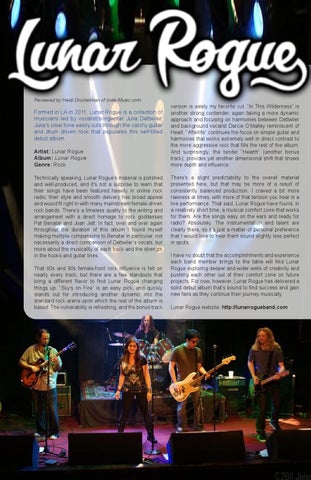 Formed in LA in 2011, Lunar Rogue is a collection of musicians led by vocalist/songwriter Julia Dettwiler. Julia’s clear tone easily cuts through the catchy guitar and drum driven rock that populates this self-titled debut album. Artist: Lunar Rogue Album: Lunar Rogue Genre: Rock Technically speaking, Lunar Rogue’s material is polished and well-produced, and it’s not a surprise to learn that their songs have been featured heavily in online rock radio; their style and smooth delivery has broad appeal and would fit right in with many mainstream female-driven rock bands. There’s a timeless quality to the writing and arrangement with a direct homage to rock goddesses Pat Benatar and Joan Jett. In fact, over and over again throughout the duration of this album I found myself making multiple comparisons to Benatar in particular; not necessarily a direct comparison of Dettwiler’s vocals, but more about the musicality of each track and the strength in the hooks and guitar lines. That 80s and 90s female-front rock influence is felt on nearly every track, but there are a few standouts that bring a different flavor to find Lunar Rogue changing things up. “Sky’s on Fire” is an easy pick, and quickly stands out for introducing another dynamic into the standard rock arena upon which the rest of the album is based. The vulnerability is refreshing, and the bonus track

version is easily my favorite cut. “In This Wilderness” is another strong contender, again taking a more dynamic approach and focusing on harmonies between Dettwiler and background vocalist Darcie O’Malley reminiscent of Heart. “Afterlife” continues the focus on simple guitar and harmonies that works extremely well in direct contrast to the more aggressive rock that fills the rest of the album. And surprisingly, the tender “Hearth” (another bonus track), provides yet another dimensional shift that shows more depth and influence. There’s a slight predictability to the overall material presented here, but that may be more of a result of consistently balanced production. I craved a bit more rawness at times, with more of that tension you hear in a live performance. That said, Lunar Rogue have found, in a relatively short time, a musical comfort zone that works for them. Are the songs easy on the ears and ready for radio? Absolutely. The instrumentation and talent are clearly there, so it’s just a matter of personal preference that I would love to hear them sound slightly less perfect in spots. I have no doubt that the accomplishments and experience each band member brings to the table will find Lunar Rogue exploring deeper and wider wells of creativity and pushing each other out of their comfort zone on future projects. For now, however, Lunar Rogue has delivered a solid debut album that’s bound to find success and gain new fans as they continue their journey musically. Lunar Rogue website: http://lunarrogueband.com

Since 1988 InterMixx has been supporting and promoting the talented indie artists of the world. This is where the real music is. Read it now...

Since 1988 InterMixx has been supporting and promoting the talented indie artists of the world. This is where the real music is. Read it now...