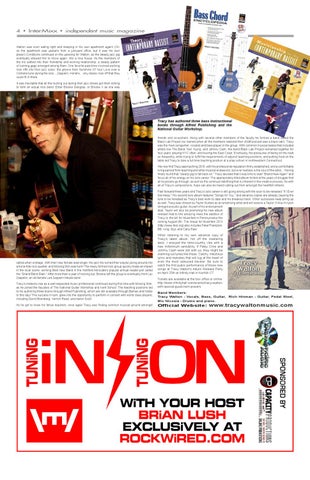  â&#x20AC;˘ InterMixx â&#x20AC;˘ independent music magazine Walton was soon eating right and sleeping in his own apartment again! (OK so the apartment was upstairs from a junkyard office, but it was his own place!) Conditions continued on the upswing for Walton, as the steady jazz gig eventually allowed him to move again, into a nice house. As the members of the trio settled into their friendship and working relationship, a steady pattern of running gags emerged among them. One favorite past-time involved working rock riffs into their jazz solos: the groove from Sunshine Of Your Love over a Coltrane tune during the solo... Zeppelin, Hendrix... any classic rock riff that they could fit in there. It was inevitable that all the rocking out during their jazz shows got them itching to form an actual rock band. Enter Brooke Gengras, or Brooke X as she was

Tracy has authored three bass instructional books through Alfred Publishing and the National Guitar Workshop. friends and co-workers. Along with several other members of the faculty he formed a band called the Black Lab Project (so named when all the members realized their childhood pet was a black lab!). Tracy was the main songwriter, vocalist and bass player in the group. With common musical tastes that included artists like The Band, Neil Young, and Johnny Cash, the band Black Lab Project remained together for four years, playing NYC often, and touring the East Coast. Eventually, the pressures of being on the road so frequently, while trying to fulfill the requirements of adjunct teaching positions, and putting food on the table led Tracy to take a full time teaching position at a prep school in northwestern Connecticut. We now find Tracy approaching 2010, with his professional reputation firmly established, and a comfortable living earned from teaching and other musical endeavors, but ever restless is the soul of the artist... Having finally found that "steady gig to fall back on," Tracy decided that it was time to start "Brand New Again" and focus all of his energy on his solo career. The appropriately titled album hinted at the years of struggle that all musicians go through, as well as the continual rebirthing that is inherent in the creative process. As with all of Tracy's compositions, hope can also be heard calling out from amongst the heartfelt refrains. Fast forward three years and Tracy's solo career is still going strong with the soon to be released "If I Ever Get Away." His second solo album features "Songs for You," and advance copies are already causing the tune to be heralded as Tracy's best work to date and his breakout track. Other successes keep piling up as well, Tracy was chosen by Taylor Guitars as an endorsing artist and will receive a Taylor 314ce-N nylon stringed acoustic guitar. As part of his endorsement deal, Taylor will also be promoting his new album release! Add to this amazing news the addition of Tracy to the bill for Musikfest in Pennsylvania this coming August 6th. The lineup for Musikfest 2013 (http://www.fest.org) also includes Peter Frampton, BB. King, Styx and Carly Rae!

called when onstage. With their new female lead singer, the jazz trio turned their playful joking around into a bona-fide rock quartet, and Missing Slim was born! The newly formed rock group quickly made an impact in the local scene, winning Best New Band in the Hartford Advocate's popular annual reader poll called the "Grand Band Slam." After more than a year of rocking out, Brooke left the group to eventually front Lez Zeppelin, an all-female Led Zeppelin tribute band. Tracy's meteoric rise as a well-respected music professional continued during this time with Missing Slim, as he joined the faculties of The National Guitar Workshop and Kent School. The teaching positions led to his authoring three books through Alfred Publishing, which are still available through Barnes and Noble to this day! This success in turn, grew into the opportunity to perform in concert with world class players; including David Bromberg, Vernon Reed, and Aaron Scott. As he got to know his fellow teachers, once again Tracy was finding common musical ground amongst

While listening to my own advance copy of Tracy's latest album, hot off the mastering deck, I enjoyed the retro-country vibe with a new millennium sensibility. If Patsy Cline and Johnny Cash were still with us, they might be cranking out tunes like these. Catchy, infectious lyrics and melodies that will tug at the heart of even the most calloused traveler. Be sure to catch the first public performance of these new songs at Tracy Walton's Album Release Party on April 25th at Infinity Hall in Norfolk CT. Tickets are available at the box office or online: http://www.infinityhall.com/events/tracy-waltonwith-special-guest-kerri-powers Band Members: Tracy Walton - Vocals, Bass, Guitar, Rich Hinman - Guitar, Pedal Steel, Mic Nicosia - Drums and piano.