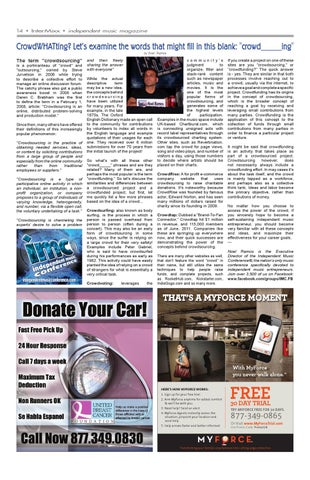 CrowdWHATting? Let&#39;s examine the words that might fill in this blank: &quot;crowd_____ing&quot; by Noël Ramos

The term &quot;crowdsourcing&quot; and is a portmanteau of &quot;crowd&quot; and &quot;outsourcing,&quot; coined by Steve Jurvetson in 2006 while trying to describe a collective effort to manage an online discussion forum. The catchy phrase also got a public awareness boost in 2008 when Daren C. Brabham was the first to define the term in a February 1, 2008, article: &quot;Crowdsourcing is an online, distributed problem-solving and production model.&quot; Since then, many others have offered their definitions of this increasingly popular phenomenon: &quot;Crowdsourcing is the practice of obtaining needed services, ideas, or content by soliciting contributions from a large group of people and especially from the online community rather than from traditional employees or suppliers.&quot; &quot;Crowdsourcing is a type of participative online activity in which an individual, an institution, a nonprofit organization, or company proposes to a group of individuals of varying knowledge, heterogeneity, and number, via a flexible open call, the voluntary undertaking of a task.&quot; &quot;Crowdsourcing is channeling the experts&#39; desire to solve a problem

then freely sharing the answer with everyone&quot; While the actual descriptive term may be a new idea, the concepts behind crowdsourcing have been utilized .. for many years. For example, in the late 1870s, The Oxford English Dictionary made an open call to the community for contributions by volunteers to index all words in the English language and example quotations of their usages for each one. They received over 6 million submissions for over 70 years from the initial launch of the project! So what&#39;s with all these other &quot;crowd_____&quot; phrases and are they related? Many of them are, and perhaps the most popular is the term &quot;crowdfunding.&quot; So let&#39;s discuss the similarities and differences between a crowdsourced project and a crowdfunded project, but first, let me quickly list a few more phrases based on the idea of a crowd... Crowdsurfing: also known as body surfing, is the process in which a person is passed overhead from person to person (often during a concert). This may also be an early form of crowdsourcing in some ways, since the surfer is relying on a large crowd for their very safety! Examples include Peter Gabriel, who is said to have crowdsurfed during his performances as early as 1982. This activity could have easily planted the idea of relying on a crowd of strangers for what is essentially a very critical task. Crowdvoting:

community&#39;s judgment to organize, filter and stack-rank content such as newspaper articles, music and movies. It is the one of the most popular forms of crowdsourcing, and generates some of the highest levels of participation. Examples in the music space include UK-based Chartburst.com, which is connecting unsigned acts with record label representatives through its crowdsourced charting system. Other sites, such as Reverbnation. com tap the crowd for page views, song and video plays, and number of visitors a day, using those numbers to decide where artists should be placed on their charts. CrowdRise: A for profit e-commerce company website that uses crowdsourcing to raise charitable donations. It&#39;s noteworthy because CrowdRise was founded by famous actor, Edward Norton, and has seen many millions of dollars raised for charity since its founding in 2009. Crowdtap: Dubbed a &quot;Brand-To-Fan Connector,&quot; Crowdtap hit $1 million in revenue, and 115,000 members as of June, 2011. Companies like these are springing up everywhere now, and their quick successes are demonstrating the power of the concepts behind crowdsourcing. There are many other websites as well, that don&#39;t feature the word &quot;crowd&quot; in their name, but still utilize the same techniques to help people raise funds, and complete projects, such as RocketHub.com, Kickstarter.com, IndieGogo.com and so many more.

If you create a project on one of these sites are you &quot;crowdsourcing,&quot; or &quot;crowdfunding?&quot; The quick answer is - yes. They are similar in that both processes involve reaching out to a crowd, usually via the internet, to achieve a goal and complete a specific project. Crowdfunding has its origins in the concept of crowdsourcing, which is the broader concept of reaching a goal by receiving and leveraging small contributions from many parties. Crowdfunding is the application of this concept to the collection of funds through small contributions from many parties in order to finance a particular project or venture. It might be said that crowdfunding is an activity that takes place as part of a crowdsourced project. Crowdsourcing however, does not necessarily always include a crowdfunding effort. In may cases it&#39;s about the task itself, and the crowd is mainly tapped as a workforce, and perhaps also as a collective think tank. Ideas and labor become the primary objective, rather than contributions of money. No matter how you choose to access the power of the crowd, if you sincerely hope to become a self-sustaining independent music entrepreneur, you should become very familiar with all these concepts and ideas, and maximize their effectiveness for your career goals. --Noel Ramos is the Executive Director of the Independent Music Conference®, the nation&#39;s only music conference specifically devoted to independent music entrepreneurs. Join over 3,500 of us on Facebook: www.facebook.com/groups/IMC.FB

With MyForce you never walk alone.™ HERE’S HOW MYFORCE WORKS: 1. Sign up for your free trial. 2. Arm MyForce anytime for added comfort &amp; we’ll be with you. 3. Need help? Send an alert. 4. MyForce Agents instantly assess the situation, pinpoint your location and send help. 5. Help arrives faster and better informed.