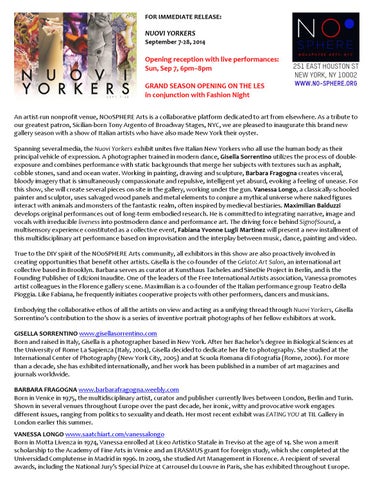 An artist‐run nonprofit venue, NOoSPHERE Arts is a collaborative platform dedicated to art from elsewhere. As a tribute to  our greatest patron, Sicilian‐born Tony Argento of Broadway Stages, NYC, we are pleased to inaugurate this brand new  gallery season with a show of Italian artists who have also made New York their oyster.

Spanning several media, the Nuovi Yorkers exhibit unites five Italian New Yorkers who all use the human body as their  principal vehicle of expression. A photographer trained in modern dance, Gisella Sorrentino utilizes the process of double‐ exposure and combines performance with static backgrounds that merge her subjects with textures such as asphalt,  cobble stones, sand and ocean water. Working in painting, drawing and sculpture, Barbara Fragogna creates visceral,  bloody imagery that is simultaneously compassionate and repulsive, intelligent yet absurd, evoking a feeling of unease. For  this show, she will create several pieces on‐site in the gallery, working under the gun. Vanessa Longo, a classically‐schooled  painter and sculptor, uses salvaged wood panels and metal elements to conjure a mythical universe where naked figures  interact with animals and monsters of the fantastic realm, often inspired by medieval bestiaries. Maximilian Balduzzi  develops original performances out of long‐term embodied research. He is committed to integrating narrative, image and  vocals with irreducible liveness into postmodern dance and performance art. The driving force behind SignofSound, a  multisensory experience constituted as a collective event, Fabiana Yvonne Lugli Martinez will present a new installment of  this multidisciplinary art performance based on improvisation and the interplay between music, dance, painting and video.

True to the DIY spirit of the NOoSPHERE Arts community, all exhibitors in this show are also proactively involved in  creating opportunities that benefit other artists. Gisella is the co‐founder of the Gelato! Art Salon, an international art  collective based in Brooklyn. Barbara serves as curator at Kunsthaus Tacheles and SineDie Project in Berlin, and is the  Founding Publisher of Edizioni Inaudite. One of the leaders of the Free International Artists association, Vanessa promotes  artist colleagues in the Florence gallery scene. Maximilian is a co‐founder of the Italian performance group Teatro della  Pioggia. Like Fabiana, he frequently initiates cooperative projects with other performers, dancers and musicians.

Embodying the collaborative ethos of all the artists on view and acting as a unifying thread through Nuovi Yorkers, Gisella  Sorrentino’s contribution to the show is a series of inventive portrait photographs of her fellow exhibitors at work.

GISELLA SORRENTINO www.gisellasorrentino.com  Born and raised in Italy, Gisella is a photographer based in New York. After her Bachelor’s degree in Biological Sciences at  the University of Rome La Sapienza (Italy, 2004), Gisella decided to dedicate her life to photography. She studied at the  International Center of Photography (New York City, 2005) and at Scuola Romana di Fotografia (Rome, 2006). For more  than a decade, she has exhibited internationally, and her work has been published in a number of art magazines and  journals worldwide.

BARBARA FRAGOGNA www.barbarafragogna.weebly.com  Born in Venice in 1975, the multidisciplinary artist, curator and publisher currently lives between London, Berlin and Turin.  Shown in several venues throughout Europe over the past decade, her ironic, witty and provocative work engages  different issues, ranging from politics to sexuality and death. Her most recent exhibit was EATING YOU at TIL Gallery in  London earlier this summer.

VANESSA LONGO www.saatchiart.com/vanessalongo  Born in Motta Livenza in 1974, Vanessa enrolled at Liceo Artistico Statale in Treviso at the age of 14. She won a merit  scholarship to the Academy of Fine Arts in Venice and an ERASMUS grant for foreign study, which she completed at the  Universidad Complutense in Madrid in 1996. In 2009, she studied Art Management in Florence. A recipient of several  awards, including the National Jury’s Special Prize at Carrousel du Louvre in Paris, she has exhibited throughout Europe.

MAXIMILIAN BALDUZZI ‐ http://www.massimilianobalduzzi.com/  Now based in NYC, Maximilian Balduzzi was born in a small village in the Dolomites. He holds a degree in Modern and  Contemporary Theater from the University of Bologna and has worked both in Italy and internationally as a performer,  teacher, and director. For the past 18 years, he has dedicated himself to the practice of physical and vocal training for  performers. He was an artist‐in‐residence at Movement Research (2010‐11) and Fresh Tracks Performance and Residency  Program at New York Live Arts (2013/14). Maximilian is currently working on a solo research project entitled REQUIEM.     FABIANA YVONNE LUGLI MARTINEZ http://vimeo.com/39818485  Born in Perù in 1973, Fabiana is a classical and contemporary dancer and visual artist trained at the historic Liceo Artistico  and The Academy of Fine Arts, both in Rome. Based in NYC since 1998, she has exhibited in many galleries in town, such as  Soho Editions, Monique Goldstrom, De Benedetti and Montserrat Art Gallery. Inspired by the music of jazz guitarist Pat  Metheny, she began to explore the relationship between music and dance‐painting in motion, which led to several inter‐ national collaborative SignofSound performances in galleries, theaters, and jazz, dance, and film festivals around the world.

OUR SPECIAL THANKS TO 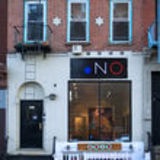