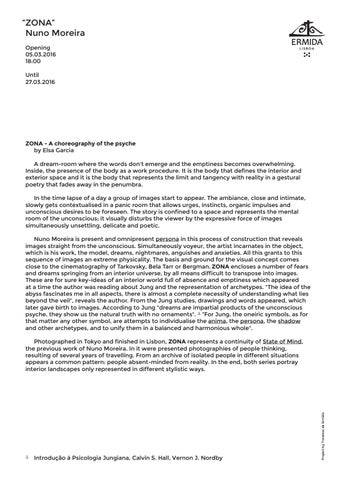 ZONA - A choreography of the psyche by Elsa Garcia A dream-room where the words don't emerge and the emptiness becomes overwhelming. Inside, the presence of the body as a work procedure. It is the body that defines the interior and exterior space and it is the body that represents the limit and tangency with reality in a gestural poetry that fades away in the penumbra. In the time lapse of a day a group of images start to appear. The ambiance, close and intimate, slowly gets contextualised in a panic room that allows urges, instincts, organic impulses and unconscious desires to be foreseen. The story is confined to a space and represents the mental room of the unconscious; it visually disturbs the viewer by the expressive force of images simultaneously unsettling, delicate and poetic. Nuno Moreira is present and omnipresent persona in this process of construction that reveals images straight from the unconscious. Simultaneously voyeur, the artist incarnates in the object, which is his work, the model, dreams, nightmares, anguishes and anxieties. All this grants to this sequence of images an extreme physicality. The basis and ground for the visual concept comes close to the cinematography of Tarkovsky, Bela Tarr or Bergman. ZONA encloses a number of fears and dreams springing from an interior universe, by all means difficult to transpose into images. These are for sure key-ideas of an interior world full of absence and emptiness which appeared at a time the author was reading about Jung and the representation of archetypes. "The idea of the abyss fascinates me in all aspects, there is almost a complete necessity of understanding what lies beyond the veil", reveals the author. From the Jung studies, drawings and words appeared, which later gave birth to images. According to Jung "dreams are impartial products of the unconscious psyche, they show us the natural truth with no ornaments". 1 “For Jung, the oneiric symbols, as for that matter any other symbol, are attempts to individualise the anima, the persona, the shadow and other archetypes, and to unify them in a balanced and harmonious whole".

Photographed in Tokyo and finished in Lisbon, ZONA represents a continuity of State of Mind, the previous work of Nuno Moreira. In it were presented photographies of people thinking, resulting of several years of travelling. From an archive of isolated people in different situations appears a common pattern: people absent-minded from reality. In the end, both series portray interior landscapes only represented in different stylistic ways. 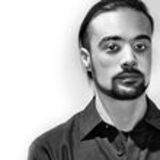 Zona a choreography of the psyche - march2016

Zona a choreography of the psyche - march2016