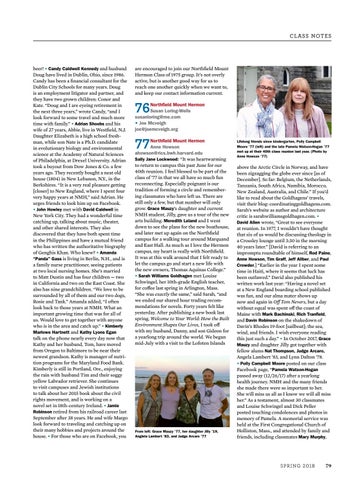 beer! • Candy Caldwell Kennedy and husband Doug have lived in Dublin, Ohio, since 1986. Candy has been a financial consultant for the Dublin City Schools for many years. Doug is an employment litigator and partner, and they have two grown children: Conor and Kate. “Doug and I are eyeing retirement in the next three years,” wrote Candy, “and I look forward to some travel and much more time with family.” • Adrian Shoobs and his wife of 27 years, Abbie, live in Westfield, N.J. Daughter Elizabeth is a high school freshman, while son Nate is a Ph.D. candidate in evolutionary biology and environmental science at the Academy of Natural Sciences of Philadelphia, at Drexel University. Adrian took a buyout from Dow Jones &amp; Co. a few years ago. They recently bought a neat old house (1804) in New Lebanon, N.Y., in the Berkshires. “It is a very real pleasure getting [closer] to New England, where I spent four very happy years at NMH,” said Adrian. He urges friends to look him up on Facebook. • John Howley met with David Caldwell in New York City. They had a wonderful time catching up, talking about music, theater, and other shared interests. They also discovered that they have both spent time in the Philippines and have a mutual friend who has written the authoritative biography of Genghis Khan. Who knew? • Amanda “Panda” Gass is living in Berlin, N.H., and is a family nurse practitioner, seeing patients at two local nursing homes. She’s married to Matt Dustin and has four children — two in California and two on the East Coast. She also has nine grandchildren. “We love to be surrounded by all of them and our two dogs, Rosie and Tank.” Amanda added, “I often look back to those years at NMH. What an important growing time that was for all of us. Would love to get together with anyone who is in the area and catch up.” • Kimberly Marlowe Hartnett and Kathy Lyons Egan talk on the phone nearly every day now that Kathy and her husband, Tom, have moved from Oregon to Baltimore to be near their newest grandson. Kathy is manager of nutrition programs for the Maryland Food Bank. Kimberly is still in Portland, Ore., enjoying the rain with husband Tim and their soggy yellow Labrador retriever. She continues to visit campuses and Jewish institutions to talk about her 2015 book about the civil rights movement, and is working on a novel set in 18th-century Ireland. • Jamie Robinson retired from his railroad career last September after 38 years. He and wife Margo look forward to traveling and catching up on their many hobbies and projects around the house. • For those who are on Facebook, you

are encouraged to join our Northfield Mount Hermon Class of 1975 group. It’s not overly active, but is another good way for us to reach one another quickly when we want to, and keep our contact information current.

Northfield Mount Hermon Anne Howson ahowson@rics.bwh.harvard.edu Sally Jane Lockwood: “It was heartwarming to return to campus this past June for our 40th reunion. I feel blessed to be part of the class of ’77 in that we all have so much fun reconnecting. Especially poignant is our tradition of forming a circle and remembering classmates who have left us. There are still only a few, but that number will only grow. Grace Mauzy’s daughter and current NMH student, Jilly, gave us a tour of the new arts building. Meredith Leland and I went down to see the plans for the new boathouse, and later met up again on the Northfield campus for a walking tour around Marquand and East Hall. As much as I love the Hermon campus, my heart is really with Northfield. It was at this walk around that I felt ready to let the campus go and start a new life with the new owners, Thomas Aquinas College.” • Sarah Williams Goldhagen met Louise Schwingel, her 10th-grade English teacher, for coffee last spring in Arlington, Mass. “She was exactly the same,” said Sarah, “and we ended our shared hour trading recommendations for novels. Forty years felt like yesterday. After publishing a new book last spring, Welcome to Your World: How the Built Environment Shapes Our Lives, I took off with my husband, Danny, and son Gideon for a yearlong trip around the world. We began mid-July with a visit to the Lofoten Islands

above the Arctic Circle in Norway, and have been zigzagging the globe ever since [as of December]. So far: Belgium, the Netherlands, Tanzania, South Africa, Namibia, Morocco, New Zealand, Australia, and Chile.” If you’d like to read about the Goldhagens’ travels, visit their blog: coordinatinggoldhagens.com. Sarah’s website as author and architecture critic is sarahwilliamsgoldhagen.com. • David Allen wrote, “Great to see everyone at reunion. In 1977, I wouldn’t have thought that six of us would be discussing theology in a Crossley lounge until 3:30 in the morning 40 years later.” [David is referring to an impromptu roundtable of himself, Rod Paine, Anne Howson, Tim Graff, Jeff Aliber, and Paul Crowder.] “Earlier in the year I spent some time in Haiti, where it seems that luck has been outlawed.” David also published his written work last year: “Having a novel set at a New England boarding school published was fun, and our alma mater shows up now and again in Off Tom Nevers, but a day without equal was spent off the coast of Maine with Mark Bachinski, Rich Tranfield, and Davin Robinson on the shakedown of Davin’s Rhodes 19-foot [sailboat]; the sea, wind, and friends. I wish everyone reading this just such a day.” • In October 2017, Grace Mauzy and daughter Jilly got together with fellow alums Nat Thompson, Judge Arcaro, Angela Lambert ’83, and Lynn Dalton ’78. • Polly Campbell Moore posted on our class Facebook page, “Pamela Watson-Hogan passed away (12/26/17) after a yearlong health journey. NMH and the many friends she made there were so important to her. She will miss us all as I know we will all miss her.” As a testament, almost 30 classmates and Louise Schwingel and Dick Peller posted touching condolences and photos in memory of Pamela. A memorial service was held at the First Congregational Church of Holliston, Mass., and attended by family and friends, including classmates Mary Murphy,