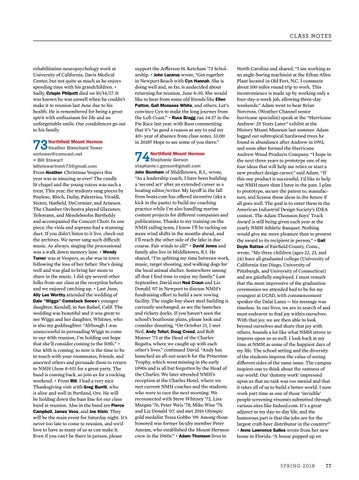 rehabilitation neuropsychology work at University of California, Davis Medical Center, but not quite as much as he enjoys spending time with his grandchildren. • Sadly, Crispin Philpott died on 10/14/17. It was known he was unwell when he couldn’t make it to reunion last June due to his health. He is remembered for being a great spirit with enthusiasm for life and an unforgettable smile. Our condolences go out to his family.

Northfield Mount Hermon Heather Blanchard Tower smtower@comcast.net • Bill Stewart billstewartnmh73@gmail.com From Heather: Christmas Vespers this year was as amazing as ever! The candle lit chapel and the young voices was such a treat. This year, the students sang pieces by Poulenc, Bloch, Dufay, Palestrina, Vivaldi, Sixten, Hatfield, DeCormier, and Arnesen. The Chamber Orchestra played Glazunov, Telemann, and Mendelssohn Bartholdy and accompanied the Concert Choir. In one piece, the viola and soprano had a stunning duet. If you didn’t listen to it live, check out the archives. We never sang such difficult music. As always, singing the processional was a walk down memory lane. • Wendy Turner was at Vespers, as she was in town following the loss of her father. She’s doing well and was glad to bring her mom to share in the music. I did spy several other folks from our class at the reception before and we enjoyed catching up. • Last June, Ally Lee Worthy attended the wedding of Dale “Wiggs” Comstock Sones’s younger daughter, Kendall, in San Rafael, Calif. The wedding was beautiful and it was great to see Wiggs and her daughter, Whitney, who is also my goddaughter. “Although I was unsuccessful in persuading Wiggs to come to our 40th reunion, I’m holding out hope that she’ll consider coming to the 50th.” • Our 45th is coming, so now is the time to be in touch with your roommates, friends, and assorted others and persuade them to return to NMH (June 8–10) for a great party. The band is coming back, so join us for a rocking weekend. • From Bill: I had a very nice Thanksgiving visit with Greg Burrill, who is alive and well in Portland, Ore. He will be holding down the bass line for our class band at reunion. Also in the band are Pierce Campbell, James Voos, and Joe Klein. They will be the main event for Saturday night. It’s never too late to come to reunion, and we’d love to have as many of us as can make it. Even if you can’t be there in person, please

support the Jefferson H. Ketcham ’73 Scholarship. • John Lazarus wrote, “Got together in Newport Beach with Cyn Hannah. She is doing well and, so far, is undecided about returning for reunion, June 8–10. She would like to hear from some old friends like Ellen Patton, Gail Monsees White, and others. Let’s convince Cyn to make the long journey from the Left Coast.” • Russ Bragg ran 34:57 in the Pie Race last year, with Russ commenting that it’s “as good a reason as any to end my 40+ year of absence from class notes. 33:00 in 2018? Hope to see some of you there.”

Northfield Mount Hermon Stephanie Gerson stephanie.l.gerson@gmail.com John Burnham of Middletown, R.I., wrote, “As a leadership coach, I have been building a ‘second act’ after an extended career as a boating editor/writer. My layoff in the fall from boats.com has offered incentive (aka a kick in the pants) to build my coaching practice while I’m also handling marine content projects for different companies and publications. Thanks to my training on the NMH sailing team, I know I’ll be tacking on more wind shifts in the months ahead, and I’ll reach the other side of the lake in due course. Fair winds to all!” • David Jones and family also live in Middletown, R.I. He shared, “I’m splitting my time between work, music, target shooting, and walking dogs for the local animal shelter. Somewhere among all that I find time to enjoy my family.” Last September, David met Ned Craun and Liz Donald ’07 in Newport to discuss NMH’s fundraising effort to build a new rowing facility. The single-bay sheet steel building is currently unchanged, as are the launches and rickety docks. If you haven’t seen the school’s boathouse plans, please look and consider donating. “On October 21, I met Ned, Andy Tofuri, Doug Creed, and Rob Moeser ’73 at the Head of the Charles Regatta, where we caught up with each other’s lives,” continued David. “Andy has launched an all-out search for the Princeton Trophy, which went missing in the early 1990s and is all but forgotten by the Head of the Charles. We later attended NMH’s reception at the Charles Hotel, where we met current NMH coaches and the students who were to race the next morning. We reconnected with Steve Whitney ’72, Lisa Morgan ’76, Peter Weis ’78, Mike Wise ’79, and Liz Donald ’07, and met 2016 Olympic gold medalist Tessa Gobbo ’09. Among those honored was former faculty member Peter Amram, who established the Mount Hermon crew in the 1960s.” • Adam Thomson lives in

North Carolina and shared, “I am working as an angle-boring machinist at the Ethan Allen Plant located in Old Fort, N.C. I commute about 100 miles round trip to work. This inconvenience is made up by working only a four-day-a-week job, allowing three-day weekends.” Adam went to hear Brian Norcross, (Weather Channel senior hurricane specialist) speak at the “Hurricane Andrew: 25 Years Later” exhibit at the History Miami Museum last summer. Adam logged out subtropical hardwood trees he found in abundance after Andrew in 1992, and soon after formed the Hurricane Andrew Wood Products Company. “I hope in the next three years to prototype one of my four ideas that will help me retire or start a new product design career,” said Adam. “If this one product is successful, I’d like to help out NMH more than I have in the past. I plan to prototype, secure the patent to, manufacture, and license these ideas in the future if all goes well. The goal is to enter them in the American Industrial Design Society’s IDEA contest. The Adam Thomson Boys’ Track Award is still being given each year at the yearly NMH Athletic Banquet. Nothing would give me more pleasure than to present the award to its recipient in person.” • Gail Doyle Rattee of Fairfield County, Conn., wrote, “My three children (ages 22, 23, and 24) have all graduated college (University of California-San Diego, University of Pittsburgh, and University of Connecticut) and are gainfully employed. I must remark that the most impressive of the graduation ceremonies we attended had to be for my youngest at UCSD, with commencement speaker the Dalai Lama — his message was timeless. In our lives, we are in search of and must endeavor to find joy within ourselves. With that joy, we are then able to look beyond ourselves and share that joy with others. Sounds a lot like what NMH strove to impress upon us as well. I look back at my time at NMH as some of the happiest days of my life. The school setting and the diversity of the students impress the value of seeing different sides of the same issue. The campus inspires one to think about the vastness of our world. Our ‘dummy work’ impressed upon us that no task was too menial and that it takes all of us to build a better world. I now work part time as one of those ‘invisible’ people screening résumés submitted through various sites like Indeed.com. It’s a great adjunct to my day-to-day life, and the humorous part is that the jobs are for the largest craft-beer distributor in the country!” • Anne Lawrence Sallee wrote from her new home in Florida: “A house popped up on