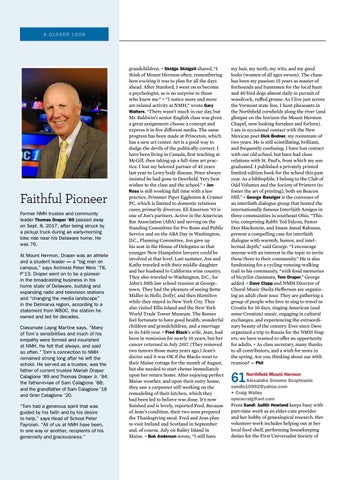 Faithful Pioneer Former NMH trustee and community leader Thomas Draper ’60 passed away on Sept. 8, 2017, after being struck by a pickup truck during an early-morning bike ride near his Delaware home. He was 76. At Mount Hermon, Draper was an athlete and a student leader — a “big man on campus,” says Archivist Peter Weis ’78, P’13. Draper went on to be a pioneer in the broadcasting business in his home state of Delaware, building and expanding radio and television stations and “changing the media landscape” in the Delmarva region, according to a statement from WBOC, the station he owned and led for decades. Classmate Layng Martine says, “Many of Tom’s sensibilities and much of his empathy were formed and nourished at NMH. He felt that always, and said so often.” Tom’s connection to NMH remained strong long after he left the school. He served as a trustee, was the father of current trustee Mariah Draper Calagione ’89 and Thomas Draper Jr. ’94; the father-in-law of Sam Calagione ’88; and the grandfather of Sam Calagione ’18 and Grier Calagione ’20. “Tom had a generous spirit that was guided by his faith and by his desire to help,” says Head of School Peter Fayroian. “All of us at NMH have been, in one way or another, recipients of his generosity and graciousness.”

grandchildren. • Skidge Skidgell shared, “I think of Mount Hermon often, remembering how exciting it was to plan for all the days ahead. After Stanford, I went on to become a psychologist, as is no surprise to those who knew me.” • “I notice more and more art-related activity at NMH,” wrote Gary Walters. “There wasn’t much in our day, but Mr. Baldwin’s senior English class was given a great assignment: choose a concept and express it in five different media. The same progress has been made at Princeton, which has a new art center. Art is a good way to dodge the devils of the politically correct. I have been living in Canada, first teaching at McGill, then taking up a full-time art practice. I lost my beloved partner of 45 years last year to Lewy body disease. Peter always insisted he had gone to Deerfield. Very best wishes to the class and the school.” • Jon Ross is still working full time with a law practice, Primmer Piper Eggleston &amp; Cramer PC, which is limited to domestic relations cases, primarily divorces. Eli Emerson ’93 is one of Jon’s partners. Active in the American Bar Association (ABA) and serving on the Standing Committee for Pro Bono and Public Service and on the ABA Day in Washington, D.C., Planning Committee, Jon gave up his seat in the House of Delegates so that younger New Hampshire lawyers could be involved at that level. Last summer, Jon and Kathy traveled with their middle daughter and her husband to California wine country. They also traveled to Washington, D.C., for John’s 50th law school reunion at Georgetown. They had the pleasure of seeing Bette Midler in Hello, Dolly!, and then Hamilton while they stayed in New York City. They also visited Ellis Island and the New York World Trade Tower Museum. The Rosses feel fortunate to have good health, wonderful children and grandchildren, and a marriage in its 54th year. • Fred Black’s wife, Jean, had been in remission for nearly 10 years, but her cancer returned in July 2017. (They removed two tumors those many years ago.) Jean’s doctor said it was OK if the Blacks went to their Maine cottage for the month of August, but she needed to start chemo immediately upon her return home. After enjoying perfect Maine weather, and upon their entry home, they saw a carpenter still working on the remodeling of their kitchen, which they had been led to believe was done. It’s now finished and is lovely, reported Fred. Because of Jean’s condition, their two sons prepared the Thanksgiving meal. Fred and Jean plan to visit Ireland and Scotland in September and, of course, July on Bailey Island in Maine. • Bob Anderson wrote, “I still have

my hair, my teeth, my wits, and my good looks (women of all ages swoon). The chase has been my passion: 15 years as master of foxhounds and huntsmen for the local hunt and 40 bird dogs almost daily in pursuit of woodcock, ruffed grouse. As I live just across the Vermont state line, I hunt pheasants in the Northfield cornfields along the river (and glimpse on the horizon the Mount Hermon Chapel, now looking forsaken and forlorn). I am in occasional contact with the New Mexican poet Dick Bodner, my roommate of two years. He is still scintillating, brilliant, and frequently confusing. I have lost contact with our old school, but have had close relations with St. Paul’s, from which my son graduated. I published a privately printed limited-edition book for the school this past year. As a bibliophile, I belong to the Club of Odd Volumes and the Society of Printers (to foster the art of printing), both on Beacon Hill.” • George Banziger is the convener of an interfaith dialogue group that hosted the internationally famous Interfaith Amigos in three communities in southeast Ohio. “This trio, comprising Rabbi Ted Falcon, Pastor Don Mackenzie, and Imam Jamal Rahman, present a compelling case for interfaith dialogue with warmth, humor, and intellectual depth,” said George. “I encourage anyone with an interest in the topic to invite these three to their community.” He is also fundraising for a cycling-running-walking trail in his community, “with fond memories of bicyclist classmate, Tom Draper,” George added. • Dave Clapp and NMH Director of Choral Music Sheila Heffernon are organizing an adult choir tour. They are gathering a group of people who love to sing to travel to Croatia for 10 days, singing American (and some Croatian) music, engaging in cultural exchanges, and experiencing the extraordinary beauty of the country. Ever since Dave organized a trip to Russia for the NMH Singers, we have wanted to offer an opportunity for adults. • As class secretary, many thanks to all contributors, and a wish for more in the spring. Are you thinking about our 60th reunion? — Phil