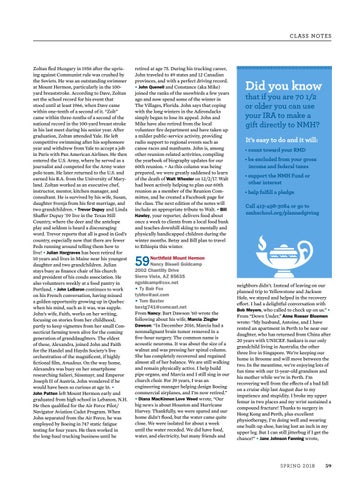 Zoltan fled Hungary in 1956 after the uprising against Communist rule was crushed by the Soviets. He was an outstanding swimmer at Mount Hermon, particularly in the 100yard breaststroke. According to Dave, Zoltan set the school record for his event that stood until at least 1966, when Dave came within one-tenth of a second of it. “Zolt” came within three-tenths of a second of the national record in the 100-yard breast stroke in his last meet during his senior year. After graduation, Zoltan attended Yale. He left competitive swimming after his sophomore year and withdrew from Yale to accept a job in Paris with Pan American Airlines. He then entered the U.S. Army, where he served as a journalist and competed for the Army water polo team. He later returned to the U.S. and earned his B.A. from the University of Maryland. Zoltan worked as an executive chef, instructor, mentor, kitchen manager, and consultant. He is survived by his wife, Susan, daughter Svenja from his first marriage, and two grandchildren. • Trevor Dupuy and Linda Shaffer Dupuy ’59 live in the Texas Hill Country, where the deer and the antelope play and seldom is heard a discouraging word. Trevor reports that all is good in God’s country, especially now that there are fewer Feds running around telling them how to live! • Julian Hargraves has been retired for 10 years and lives in Maine near his youngest daughter and two grandchildren. Julian stays busy as finance chair of his church and president of his condo association. He also volunteers weekly at a food pantry in Portland. • John LeBaron continues to work on his French conversation, having missed a golden opportunity growing up in Quebec when his mind, such as it was, was supple. John’s wife, Faith, works on her writing, focusing on stories from her childhood, partly to keep vignettes from her small Connecticut farming town alive for the coming generation of granddaughters. The eldest of these, Alexandra, joined John and Faith for the Handel and Haydn Society’s live orchestration of the magnificent, if highly fictional film, Amadeus. On the way home, Alexandra was busy on her smartphone researching Salieri, Süssmayr, and Emperor Joseph II of Austria. John wondered if he would have been so curious at age 16. • John Patten left Mount Hermon early and graduated from high school in Lebanon, N.H. He then qualified for the Air Force Pilot/ Navigator Aviation Cadet Program. When John separated from the Air Force, he was employed by Boeing in 747 static fatigue testing for four years. He then worked in the long-haul trucking business until he

retired at age 75. During his trucking career, John traveled to 49 states and 12 Canadian provinces, and with a perfect driving record. • John Quenell and Constance (aka Mike) joined the ranks of the snowbirds a few years ago and now spend some of the winter in The Villages, Florida. John says that coping with the long winters in the Adirondacks simply began to lose its appeal. John and Mike have also retired from the local volunteer fire department and have taken up a milder public-service activity, providing radio support to regional events such as canoe races and manhunts. John is, among other reunion-related activities, compiling the yearbook of biography updates for our 60th reunion. • As this column was being prepared, we were greatly saddened to learn of the death of Walt Wheeler on 12/2/17. Walt had been actively helping to plan our 60th reunion as a member of the Reunion Committee, and he created a Facebook page for the class. The next edition of the notes will include an appropriate tribute to Walt. • Bill Hawley, your reporter, delivers food about once a week to clients from a local food bank and teaches downhill skiing to mentally and physically handicapped children during the winter months. Betsy and Bill plan to travel to Ethiopia this winter.

that if you are 70 1/2 or older you can use your IRA to make a gift directly to NMH? It’s easy to do and it will: • count toward your RMD • be excluded from your gross income and federal taxes • support the NMH Fund or other interest • help fulfill a pledge Call 413-498-3084 or go to nmhschool.org/plannedgiving

Northfield Mount Hermon Nancy Bissell Goldcamp 2002 Chantilly Drive Sierra Vista, AZ 85635 ngoldcamp@cox.net • Ty Bair Fox tybfox@aol.com • Tom Baxter baxtg741@comcast.net From Nancy: Bart Dawson ’60 wrote the following about his wife, Marcia Ziegler Dawson: “In December 2016, Marcia had a nonmalignant brain tumor removed in a five-hour surgery. The common name is acoustic neuroma. It was about the size of a walnut and was pressing her spinal column. She has completely recovered and regained almost all of her balance. We are still walking and remain physically active. I help build pipe organs, and Marcia and I still sing in our church choir. For 39 years, I was an engineering manager helping design Boeing commercial airplanes, and I’m now retired.” • Diana MacKinnon Love Weed wrote, “Our big news is about Houston and Hurricane Harvey. Thankfully, we were spared and our home didn’t flood, but the water came quite close. We were isolated for about a week until the water receded. We did have food, water, and electricity, but many friends and

neighbors didn’t. Instead of leaving on our planned trip to Yellowstone and Jackson Hole, we stayed and helped in the recovery effort. I had a delightful conversation with Bob Meyers, who called to check up on us.” • From “Down Under,” Anne Roeser Bloemen wrote: “My husband, Antoine, and I have rented an apartment in Perth to be near our daughter, who has returned from China after 20 years with UNICEF. Sankara is our only grandchild living in Australia; the other three live in Singapore. We’re keeping our home in Broome and will move between the two. In the meantime, we’re enjoying lots of fun time with our 11-year-old grandson and his mother while we’re in Perth. I’m recovering well from the effects of a bad fall on a cruise ship last August due to my impatience and stupidity. I broke my upper femur in two places and my wrist sustained a compound fracture! Thanks to surgery in Hong Kong and Perth, plus excellent physiotherapy, I’m doing well and wearing one built-up shoe, having lost an inch in my upper leg. But I can still jitterbug if I get the chance!” • Jane Johnson Fanning wrote,