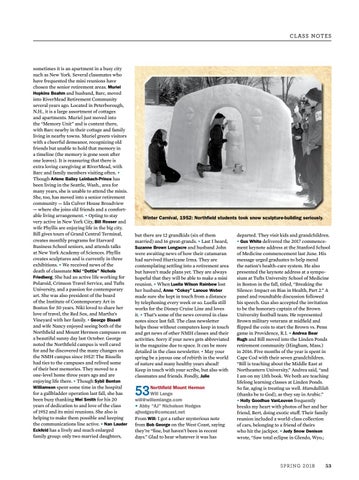 sometimes it is an apartment in a busy city such as New York. Several classmates who have frequented the mini reunions have chosen the senior retirement areas. Muriel Hopkins Beahm and husband, Barc, moved into RiverMead Retirement Community several years ago. Located in Peterborough, N.H., it is a large assortment of cottages and apartments. Muriel just moved into the “Memory Unit” and is content there, with Barc nearby in their cottage and family living in nearby towns. Muriel greets visitors with a cheerful demeanor, recognizing old friends but unable to hold that memory in a timeline (the memory is gone soon after one leaves). It is reassuring that there is extra loving caregiving at RiverMead, with Barc and family members visiting often. • Though Arlene Bailey Leinbach-Prince has been living in the Seattle, Wash., area for many years, she is unable to attend the minis. She, too, has moved into a senior retirement community — Ida Culver House Broadview — where she joins old friends and a comfortable living arrangement. • Opting to stay very active in New York City, Bill Rosser and wife Phyllis are enjoying life in the big city. Bill gives tours of Grand Central Terminal, creates monthly programs for Harvard Business School seniors, and attends talks at New York Academy of Sciences. Phyllis creates sculptures and is currently in three exhibitions. • We received news of the death of classmate Niki “Dottie” Nichols Friedberg. She had an active life working for Polaroid, Crimson Travel Service, and Tufts University, and a passion for contemporary art. She was also president of the board of the Institute of Contemporary Art in Boston for 50 years. Niki loved to share her love of travel, the Red Sox, and Martha’s Vineyard with her family. • George Bissell and wife Nancy enjoyed seeing both of the Northfield and Mount Hermon campuses on a beautiful sunny day last October. George noted the Northfield campus is well cared for and he discovered the many changes on the NMH campus since 1952! The Bissells had ties to the campuses and relived some of their best memories. They moved to a one-level home three years ago and are enjoying life there. • Though Sybil Benton Williamson spent some time in the hospital for a gallbladder operation last fall, she has been busy thanking Mel Smith for his 20 years of dedication to and love of the class of 1952 and its mini reunions. She also is helping to make them possible and keeping the communications line active. • Nan Lauder Eckfeld has a lively and much enlarged family group: only two married daughters,

Winter Carnival, 1952: Northfield students took snow sculpture-building seriously. but there are 12 grandkids (six of them married) and 16 great-grands. • Last I heard, Suzanne Brown Longacre and husband John were awaiting news of how their catamaran had survived Hurricane Irma. They are contemplating settling into a retirement area but haven’t made plans yet. They are always hopeful that they will be able to make a mini reunion. • When Luella Wilson Rainbow lost her husband, Anne “Cokey” Lanoue Weber made sure she kept in touch from a distance by telephoning every week or so. Luella still works for the Disney Cruise Line and loves it. • That’s some of the news covered in class notes since last fall. The class newsletter helps those without computers keep in touch and get news of other NMH classes and their activities. Sorry if your news gets abbreviated in the magazine due to space. It can be more detailed in the class newsletter. • May your spring be a joyous one of rebirth in the world of nature and many healthy years ahead! Keep in touch with your scribe, but also with classmates and friends. Fondly, Julie

Northfield Mount Hermon Will Lange will@willemlange.com • Abby “AJ” Nicholson Hodges ajhodges@comcast.net From Will: I got a rather mysterious note from Bob George on the West Coast, saying they’re “fine, but haven’t been in recent days.” Glad to hear whatever it was has

departed. They visit kids and grandchildren. • Gus White delivered the 2017 commencement keynote address at the Stanford School of Medicine commencement last June. His message urged graduates to help mend the nation’s health-care system. He also presented the keynote address at a symposium at Tufts University School of Medicine in Boston in the fall, titled, “Breaking the Silence: Impact on Bias in Health, Part 2.” A panel and roundtable discussion followed his speech. Gus also accepted the invitation to be the honorary captain of the Brown University football team. He represented Brown military veterans at midfield and flipped the coin to start the Brown vs. Penn game in Providence, R.I. • Andrea Bear Rugh and Bill moved into the Linden Ponds retirement community (Hingham, Mass.) in 2016. Five months of the year is spent in Cape Cod with their seven grandchildren. “Bill is teaching about the Middle East at Northeastern University,” Andrea said, “and I am on my 13th book. We both are teaching lifelong learning classes at Linden Ponds. So far, aging is treating us well. Humdullilah (thanks be to God), as they say in Arabic.” • Holly Goodhue VanLeuven frequently breaks my heart with photos of her and her friend, Bert, doing exotic stuff. Their family reunion included a world-class collection of cars, belonging to a friend of theirs who hit the jackpot. • Judy Snow Denison wrote, “Saw total eclipse in Glendo, Wyo.;