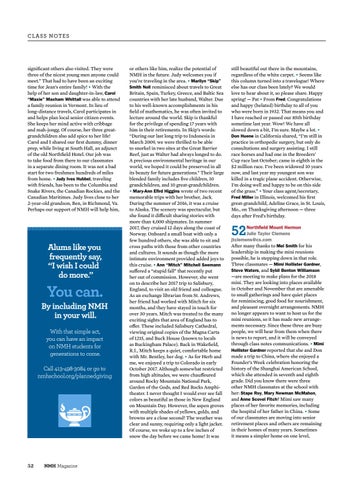 significant others also visited. They were three of the nicest young men anyone could meet.” That had to have been an exciting time for Jean’s entire family! • With the help of her son and daughter-in-law, Carol “Maxie” Maxham Whittall was able to attend a family reunion in Vermont. In lieu of long-distance travels, Carol participates in and helps plan local senior citizen events. She keeps her mind active with cribbage and mah-jongg. Of course, her three greatgrandchildren also add spice to her life! Carol and I shared our first dummy, dinner prep, while living at South Hall, an adjunct of the old Northfield Hotel. Our job was to take food from there to our classmates in a separate dining room. It was not a bad start for two freshmen hundreds of miles from home. • Judy Ives Hubbel, traveling with friends, has been to the Columbia and Snake Rivers, the Canadian Rockies, and the Canadian Maritimes. Judy lives close to her 2-year-old grandson, Ben, in Richmond, Va. Perhaps our support of NMH will help him,

Alums like you frequently say, “I wish I could do more.”

By including NMH in your will. With that simple act, you can have an impact on NMH students for generations to come. Call 413-498-3084 or go to nmhschool.org/plannedgiving

or others like him, realize the potential of NMH in the future. Judy welcomes you if you’re traveling in the area. • Marilyn “Skip” Smith Noll reminisced about travels to Great Britain, Spain, Turkey, Greece, and Baltic Sea countries with her late husband, Walter. Due to his well-known accomplishments in his field of mathematics, he was often invited to lecture around the world. Skip is thankful for the privilege of spending 17 years with him in their retirements. In Skip’s words: “During our last long trip to Indonesia in March 2009, we were thrilled to be able to snorkel in two sites at the Great Barrier Reef, just as Walter had always longed to do. A precious environmental heritage in our world, we hoped it could be preserved in all its beauty for future generations.” Their large blended family includes five children, 10 grandchildren, and 10 great-grandchildren. • Mary-Ann Efird Higgins wrote of two recent memorable trips with her brother, Jack. During the summer of 2016, it was a cruise to Alaska. The scenery was spectacular, but she found it difficult sharing stories with more than 4,000 shipmates. In summer 2017, they cruised 12 days along the coast of Norway. Onboard a small boat with only a few hundred others, she was able to sit and cross paths with those from other countries and cultures. It sounds as though the more intimate environment provided added joys to this cruise. • Ann “Mitch” Mitchell Seemann suffered a “stupid fall” that recently put her out of commission. However, she went on to describe her 2017 trip to Salisbury, England, to visit an old friend and colleague. As an exchange librarian from St. Andrews, her friend had worked with Mitch for six months, and they have stayed in touch for over 30 years. Mitch was treated to the many exciting sights that area of England has to offer. These included Salisbury Cathedral, viewing original copies of the Magna Carta of 1215, and Buck House (known to locals as Buckingham Palace). Back in Wakefield, R.I., Mitch keeps a quiet, comfortable home with Mr. Bentley, her dog. • As for Herb and me, we enjoyed a trip to Colorado in early October 2017. Although somewhat restricted from high altitudes, we were chauffeured around Rocky Mountain National Park, Garden of the Gods, and Red Rocks Amphitheater. I never thought I would ever see fall colors as beautiful as those in New England on Mountain Day. However, the aspen groves with multiple shades of yellows, golds, and browns are a close second! The weather was clear and sunny, requiring only a light jacket. Of course, we woke up to a few inches of snow the day before we came home! It was

still beautiful out there in the mountains, regardless of the white carpet. • Seems like this column turned into a travelogue! Where else has our class been lately? We would love to hear about it, so please share. Happy spring! — Pat • From Fred: Congratulations and happy (belated) birthday to all of you who were born in 1932. That means you and I have reached or passed our 85th birthday sometime last year. Wow! We have all slowed down a bit, I’m sure. Maybe a lot. • Don Huene in California shared, “I’m still in practice in orthopedic surgery, but only do consultations and surgery assisting. I still race horses and had one in the Breeders’ Cup race last October; came in eighth in the $2 million race. I’ve been widowed 10 years now, and last year my youngest son was killed in a tragic plane accident. Otherwise, I’m doing well and happy to be on this side of the grass.” • Your class agent/secretary, Fred Miller in Illinois, welcomed his first great-grandchild, Adeline Grace, in St. Louis, Mo., on Thanksgiving afternoon — three days after Fred’s birthday.

Northfield Mount Hermon Julie Taylor Clemens jtclemens@cs.com After many thanks to Mel Smith for his leadership in making the mini reunions possible, he is stepping down in that role. Three classmates — Mimi Hollister Gardner, Steve Waters, and Sybil Benton Williamson —are meeting to make plans for the 2018 mini. They are looking into places available in October and November that are amenable to small gatherings and have quiet places for reminiscing, good food for nourishment, and pleasant overnight arrangements. NMH no longer appears to want to host us for the mini reunions, so it has made new arrangements necessary. Since these three are busy people, we will hear from them when there is news to report, and it will be conveyed through class notes communications. • Mimi Hollister Gardner reported that she and Don made a trip to China, where she enjoyed a Founder’s Week celebration honoring the history of the Shanghai American School, which she attended in seventh and eighth grade. Did you know there were three other NMH classmates at the school with her: Stape Roy, Mary Newman McMahon, and Anne Scovel Fitch? Mimi saw many places of her favorite memories, including the hospital of her father in China. • Some of our classmates are moving into senior retirement places and others are remaining in their homes of many years. Sometimes it means a simpler home on one level,