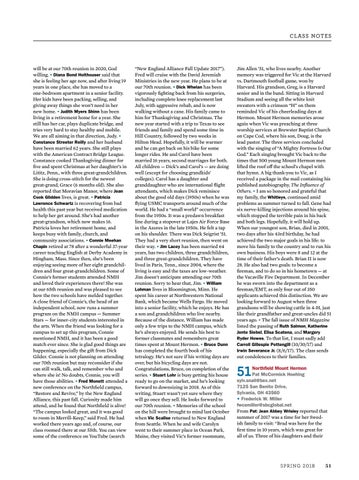 will be at our 70th reunion in 2020, God willing. • Diana Bond Holthouser said that she is feeling her age now, and after living 19 years in one place, she has moved to a one-bedroom apartment in a senior facility. Her kids have been packing, selling, and giving away things she won’t need in her new home. • Judith Myers Shinn has been living in a retirement home for a year. She still has her car, plays duplicate bridge, and tries very hard to stay healthy and mobile. We are all aiming in that direction, Judy. • Constance Streeter Reilly and her husband have been married 62 years. She still plays with the American Contract Bridge League. Constance cooked Thanksgiving dinner for five and spent Christmas at her daughter’s in Lititz, Penn., with three great-grandchildren. She is doing cross-stitch for the newest great-grand, Grace (6 months old). She also reported that Moravian Manor, where Jean Cook Glidden lives, is great. • Patricia Lawrence Schwartz is recovering from bad health this past year but received medication to help her get around. She’s had another great-grandson, which now makes 16. Patricia loves her retirement home, and keeps busy with family, church, and community associations. • Connie Meehan Chapin retired at 78 after a wonderful 37-year career teaching English at Derby Academy in Hingham, Mass. Since then, she’s been enjoying seeing more of her eight grandchildren and four great-grandchildren. Some of Connie’s former students attended NMH and loved their experiences there! She was at our 65th reunion and was pleased to see how the two schools have melded together. A close friend of Connie’s, the head of an independent school, now runs a summer program on the NMH campus — Summer Stars — for inner-city students interested in the arts. When the friend was looking for a campus to set up this program, Connie mentioned NMH, and it has been a good match ever since. She is glad good things are happening, especially the gift from Dick Gilder. Connie is not planning on attending our 70th reunion but may reconsider if she can still walk, talk, and remember who and where she is! No doubts, Connie, you will have those abilities. • Fred Monett attended a new conference on the Northfield campus, “Restore and Revive,” by the New England Alliance, this past fall. Curiosity made him attend, and he found that Northfield is alive! “The campus looked great, and it was good to room in Merrill-Keep,” said Fred. He had worked there years ago and, of course, our class roomed there at our 55th. You can view some of the conference on YouTube (search

“New England Alliance Fall Update 2017”). Fred will cruise with the David Jeremiah Ministries in the new year. He plans to be at our 70th reunion. • Dick Whelan has been vigorously fighting back from his surgeries, including complete knee replacement last July, with aggressive rehab, and is now walking without a cane. His family came to him for Thanksgiving and Christmas. The new year started with a trip to Texas to see friends and family and spend some time in Hill Country, followed by two weeks in Hilton Head. Hopefully, it will be warmer and he can get back on his bike for some longer rides. He and Carol have been married 16 years, second marriages for both. All children — Dick’s and Carol’s — are doing well (except for choosing grandkids’ colleges). Carol has a daughter and granddaughter who are international flight attendants, which makes Dick reminisce about the good old days (1950s) when he was flying USMC transports around much of the world. He had a “small world” occurrence from the 1950s. It was a predawn breakfast line during a stopover at Lajes Air Force Base in the Azores in the late 1950s. He felt a tap on his shoulder. There was Dick Seigrist ’51. They had a very short reunion, then went on their way. • Jim Lacey has been married 64 years, has two children, three grandchildren, and three great-grandchildren. They have lived in Paris, Tenn., since 2004, where the living is easy and the taxes are low-weather. Jim doesn’t anticipate attending our 70th reunion. Sorry to hear that, Jim. • William Lohman lives in Bloomington, Minn. He spent his career at Northwestern National Bank, which became Wells Fargo. He moved into a senior facility, which he enjoys. He has a son and grandchildren who live nearby. Because of the distance, William has made only a few trips to the NMH campus, which he’s always enjoyed. He sends his best to former classmates and remembers great times spent at Mount Hermon. • Bruce Dunn has completed the fourth book of his tetralogy. He’s not sure if his writing days are over, but his bicycling days are not. Congratulations, Bruce, on completion of the series. • Stuart Lohr is busy getting his house ready to go on the market, and he’s looking forward to downsizing in 2018. As of this writing, Stuart wasn’t yet sure where they will go once they sell. He looks forward to our 70th reunion. • Memories of the school on the hill were brought to mind last October when Vic Scalise returned to New England from Seattle. When he and wife Carolyn went to their summer place in Ocean Park, Maine, they visited Vic’s former roommate,

Jim Allen ’51, who lives nearby. Another memory was triggered for Vic at the Harvard vs. Dartmouth football game, won by Harvard. His grandson, Greg, is a Harvard senior and in the band. Sitting in Harvard Stadium and seeing all the white knit sweaters with a crimson “H” on them reminded Vic of his cheerleading days at Hermon. Mount Hermon memories arose again when Vic was preaching at three worship services at Brewster Baptist Church on Cape Cod, where his son, Doug, is the lead pastor. The three services concluded with the singing of “A Mighty Fortress Is Our God.” Each singing brought Vic back to the times that 500 young Mount Hermon men lifted the roof off the school’s chapel with that hymn. A big thank-you to Vic, as I received a package in the mail containing his published autobiography, The Influence of Others. • I am so honored and grateful that my family, the Whitleys, continued amid problems as summer turned to fall. Gene had six nerve-killing injections around his spine, which stopped the terrible pain in his back and both legs. Hopefully, it will hold up. When our youngest son, Brian, died in 2001, two days after his 43rd birthday, he had achieved the two major goals in his life: to move his family to the country and to run his own business. His boys were 8 and 12 at the time of their father’s death. Brian II is now 28. He also had two goals: to become a fireman, and to do so in his hometown — at the Vacaville Fire Department. In December he was sworn into the department as a fireman/EMT, as only four out of 350 applicants achieved this distinction. We are looking forward to August when three grandsons will be showing cattle in 4-H, just like their grandfather and great-uncles did 51 years ago. • The fall issue of NMH Magazine listed the passing of Ruth Salmon, Katherine Jente Siebel, Elisa Scatena, and Margery Ryder Howes. To that list, I must sadly add Carroll Gillespie Pettengill (10/30/17) and Irwin Severance Jr. (8/6/17). The class sends out condolences to their families.

Northfield Mount Hermon Pat McCormick Hoehing sylv.snail@bex.net 7125 San Benito Drive, Sylvania, OH 43560 • Frederick W. Miller fwcemiller@sbcglobal.net From Pat: Jean Abbey Wrisley reported that summer of 2017 was a time for her Swedish family to visit: “Brad was here for the first time in 10 years, which was great for all of us. Three of his daughters and their