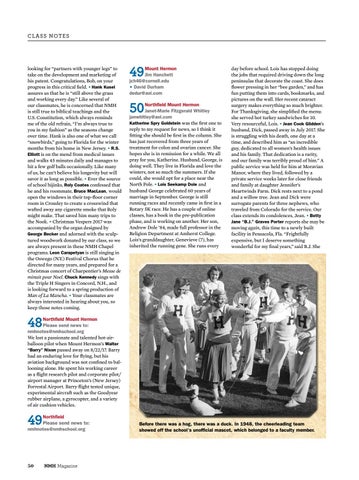 looking for “partners with younger legs” to take on the development and marketing of his patent. Congratulations, Bob, on your progress in this critical field. • Hank Kusel assures us that he is “still above the grass and working every day.” Like several of our classmates, he is concerned that NMH is still true to biblical teachings and the U.S. Constitution, which always reminds me of the old refrain, “I’m always true to you in my fashion” as the seasons change over time. Hank is also one of what we call “snowbirds,” going to Florida for the winter months from his home in New Jersey. • R.S. Elliott is on the mend from medical issues and walks 45 minutes daily and manages to hit a few golf balls occasionally. Like many of us, he can’t believe his longevity but will savor it as long as possible. • Ever the source of school hijinks, Roly Coates confessed that he and his roommate, Bruce MacLean, would open the windows in their top-floor corner room in Crossley to create a crosswind that wafted away any cigarette smoke that Roly might make. That saved him many trips to the Nook. • Christmas Vespers 2017 was accompanied by the organ designed by George Becker and adorned with the sculptured woodwork donated by our class, so we are always present in these NMH Chapel programs. Leon Carapetyan is still singing in the Oswego (N.Y.) Festival Chorus that he directed for many years, and prepared for a Christmas concert of Charpentier’s Messe de minuit pour Noel. Chuck Kennedy sings with the Triple H Singers in Concord, N.H., and is looking forward to a spring production of Man of La Mancha. • Your classmates are always interested in hearing about you, so keep those notes coming.

Northfield Mount Hermon Janet-Marie Fitzgerald Whitley janwhitley@aol.com Katherine Spry Goldstein was the first one to reply to my request for news, so I think it fitting she should be first in the column. She has just recovered from three years of treatment for colon and ovarian cancer. She hopes she is in remission for a while. We all pray for you, Katherine. Husband, George, is doing well. They live in Florida and love the winters, not so much the summers. If she could, she would opt for a place near the North Pole. • Lois Seekamp Dole and husband George celebrated 60 years of marriage in September. George is still running races and recently came in first in a Rotary 5K race. He has a couple of online classes, has a book in the pre-publication phase, and is working on another. Her son, Andrew Dole ’84, made full professor in the Religion Department at Amherst College. Lois’s granddaughter, Genevieve (7), has inherited the running gene. She runs every

day before school. Lois has stopped doing the jobs that required driving down the long peninsulas that decorate the coast. She does flower pressing in her “bee garden,” and has fun putting them into cards, bookmarks, and pictures on the wall. Her recent cataract surgery makes everything so much brighter. For Thanksgiving, she simplified the menu: she served hot turkey sandwiches for 10. Very resourceful, Lois. • Jean Cook Glidden’s husband, Dick, passed away in July 2017. She is struggling with his death, one day at a time, and described him as “an incredible guy, dedicated to all women’s health issues and his family. That dedication is a rarity, and our family was terribly proud of him.” A public service was held for him at Moravian Manor, where they lived, followed by a private service weeks later for close friends and family at daughter Jennifer’s Heartwinds Farm. Dick rests next to a pond and a willow tree. Jean and Dick were surrogate parents for three nephews, who traveled from Colorado for the service. Our class extends its condolences, Jean. • Betty Jane “B.J.” Graves Porter reports she may be moving again, this time to a newly built facility in Pensacola, Fla. “Frightfully expensive, but I deserve something wonderful for my final years,” said B.J. She

Northfield Mount Hermon Please send news to: nmhnotes@nmhschool.org We lost a passionate and talented hot-airballoon pilot when Mount Hermon’s Walter “Barry” Nixon passed away on 8/22/17. Barry had an enduring love for flying, but his aviation background was not confined to ballooning alone. He spent his working career as a flight research pilot and corporate pilot/ airport manager at Princeton’s (New Jersey) Forrestal Airport. Barry flight tested unique, experimental aircraft such as the Goodyear rubber airplane, a gyrocopter, and a variety of air cushion vehicles.

Before there was a hog, there was a duck. In 1948, the cheerleading team showed off the school’s unofficial mascot, which belonged to a faculty member.