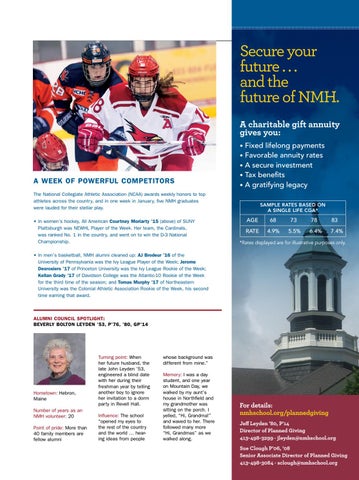 A WEEK OF POWERFUL COMPETITORS The National Collegiate Athletic Association (NCAA) awards weekly honors to top athletes across the country, and in one week in January, five NMH graduates were lauded for their stellar play. • I n women’s hockey, All American Courtney Moriarty ’15 (above) of SUNY Plattsburgh was NEWHL Player of the Week. Her team, the Cardinals, was ranked No. 1 in the country, and went on to win the D-3 National Championship.

SAMPLE RATES BASED ON A SINGLE LIFE CGA*

*Rates displayed are for illustrative purposes only.

Hometown: Hebron, Maine Number of years as an NMH volunteer: 20 Point of pride: More than 40 family members are fellow alumni

Turning point: When her future husband, the late John Leyden ’53, engineered a blind date with her during their freshman year by telling another boy to ignore her invitation to a dorm party in Revell Hall. Influence: The school “opened my eyes to the rest of the country and the world … hearing ideas from people

whose background was different from mine.” Memory: I was a day student, and one year on Mountain Day, we walked by my aunt’s house in Northfield and my grandmother was sitting on the porch. I yelled, “Hi, Grandma!” and waved to her. There followed many more “Hi, Grandmas” as we walked along.