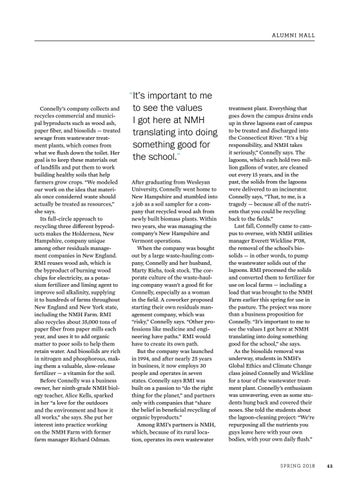 Connelly’s company collects and recycles commercial and municipal byproducts such as wood ash, paper fiber, and biosolids — treated sewage from wastewater treatment plants, which comes from what we flush down the toilet. Her goal is to keep these materials out of landfills and put them to work building healthy soils that help farmers grow crops. “We modeled our work on the idea that materials once considered waste should actually be treated as resources,” she says. Its full-circle approach to recycling three different byproducts makes the Holderness, New Hampshire, company unique among other residuals management companies in New England. RMI reuses wood ash, which is the byproduct of burning wood chips for electricity, as a potassium fertilizer and liming agent to improve soil alkalinity, supplying it to hundreds of farms throughout New England and New York state, including the NMH Farm. RMI also recycles about 35,000 tons of paper fiber from paper mills each year, and uses it to add organic matter to poor soils to help them retain water. And biosolids are rich in nitrogen and phosphorous, making them a valuable, slow-release fertilizer — a vitamin for the soil. Before Connelly was a business owner, her ninth-grade NMH biology teacher, Alice Kells, sparked in her “a love for the outdoors and the environment and how it all works,” she says. She put her interest into practice working on the NMH Farm with former farm manager Richard Odman.

“ It’s important to me to see the values I got here at NMH translating into doing something good for the school.” After graduating from Wesleyan University, Connelly went home to New Hampshire and stumbled into a job as a soil sampler for a company that recycled wood ash from newly built biomass plants. Within two years, she was managing the company’s New Hampshire and Vermont operations. When the company was bought out by a large waste-hauling company, Connelly and her husband, Marty Riehs, took stock. The corporate culture of the waste-hauling company wasn’t a good fit for Connelly, especially as a woman in the field. A coworker proposed starting their own residuals management company, which was “risky,” Connelly says. “Other professions like medicine and engineering have paths.” RMI would have to create its own path. But the company was launched in 1994, and after nearly 25 years in business, it now employs 30 people and operates in seven states. Connelly says RMI was built on a passion to “do the right thing for the planet,” and partners only with companies that “share the belief in beneficial recycling of organic byproducts.” Among RMI’s partners is NMH, which, because of its rural location, operates its own wastewater

treatment plant. Everything that goes down the campus drains ends up in three lagoons east of campus to be treated and discharged into the Connecticut River. “It’s a big responsibility, and NMH takes it seriously,” Connelly says. The lagoons, which each hold two million gallons of water, are cleaned out every 15 years, and in the past, the solids from the lagoons were delivered to an incinerator. Connelly says, “That, to me, is a tragedy — because all of the nutrients that you could be recycling back to the fields.” Last fall, Connelly came to campus to oversee, with NMH utilities manager Everett Wickline P’08, the removal of the school’s biosolids — in other words, to pump the wastewater solids out of the lagoons. RMI processed the solids and converted them to fertilizer for use on local farms — including a load that was brought to the NMH Farm earlier this spring for use in the pasture. The project was more than a business proposition for Connelly. “It’s important to me to see the values I got here at NMH translating into doing something good for the school,” she says. As the biosolids removal was underway, students in NMH’s Global Ethics and Climate Change class joined Connelly and Wickline for a tour of the wastewater treatment plant. Connelly’s enthusiasm was unwavering, even as some students hung back and covered their noses. She told the students about the lagoon-cleaning project: “We’re repurposing all the nutrients you guys leave here with your own bodies, with your own daily flush.”