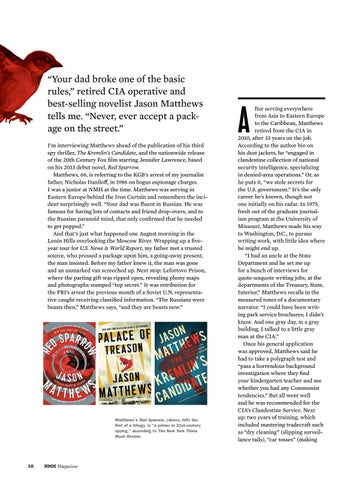 “Your dad broke one of the basic rules,” retired CIA operative and best-selling novelist Jason Matthews tells me. “Never, ever accept a package on the street.” I’m interviewing Matthews ahead of the publication of his third spy thriller, The Kremlin’s Candidate, and the nationwide release of the 20th Century Fox film starring Jennifer Lawrence, based on his 2013 debut novel, Red Sparrow. Matthews, 66, is referring to the KGB’s arrest of my journalist father, Nicholas Daniloff, in 1986 on bogus espionage charges. I was a junior at NMH at the time. Matthews was serving in Eastern Europe behind the Iron Curtain and remembers the incident surprisingly well. “Your dad was fluent in Russian. He was famous for having lots of contacts and friend drop-overs, and to the Russian paranoid mind, that only confirmed that he needed to get popped.” And that’s just what happened one August morning in the Lenin Hills overlooking the Moscow River. Wrapping up a fiveyear tour for U.S. News &amp; World Report, my father met a trusted source, who pressed a package upon him, a going-away present, the man insisted. Before my father knew it, the man was gone and an unmarked van screeched up. Next stop: Lefortovo Prison, where the parting gift was ripped open, revealing phony maps and photographs stamped “top secret.” It was retribution for the FBI’s arrest the previous month of a Soviet U.N. representative caught receiving classified information. “The Russians were beasts then,” Matthews says, “and they are beasts now.”

Matthews’s Red Sparrow, (above, left) the first of a trilogy, is “a primer in 21st-century spying,” according to The New York Times Book Review.

fter serving everywhere from Asia to Eastern Europe to the Caribbean, Matthews retired from the CIA in 2010, after 33 years on the job. According to the author bio on his dust jackets, he “engaged in clandestine collection of national security intelligence, specializing in denied-area operations.” Or, as he puts it, “we stole secrets for the U.S. government.” It’s the only career he’s known, though not one initially on his radar. In 1975, fresh out of the graduate journalism program at the University of Missouri, Matthews made his way to Washington, D.C., to pursue writing work, with little idea where he might end up. “I had an uncle at the State Department and he set me up for a bunch of interviews for quote-unquote writing jobs, at the departments of the Treasury, State, Interior,” Matthews recalls in the measured tones of a documentary narrator. “I could have been writing park service brochures; I didn’t know. And one gray day, in a gray building, I talked to a little gray man at the CIA.” Once his general application was approved, Matthews said he had to take a polygraph test and “pass a horrendous background investigation where they find your kindergarten teacher and see whether you had any Communist tendencies.” But all went well and he was recommended for the CIA’s Clandestine Service. Next up: two years of training, which included mastering tradecraft such as “dry cleaning” (slipping surveillance tails), “car tosses” (making