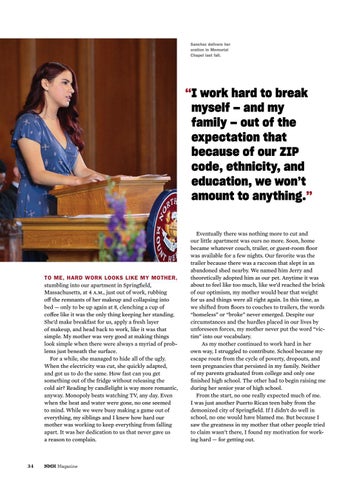 “ I work hard to break myself — and my family — out of the expectation that because of our ZIP code, ethnicity, and education, we won’t amount to anything.”

TO ME, HARD WORK LOOKS LIKE MY MOTHER, stumbling into our apartment in Springfield, Massachusetts, at 4 a.m., just out of work, rubbing off the remnants of her makeup and collapsing into bed — only to be up again at 8, clenching a cup of coffee like it was the only thing keeping her standing. She’d make breakfast for us, apply a fresh layer of makeup, and head back to work, like it was that simple. My mother was very good at making things look simple when there were always a myriad of problems just beneath the surface. For a while, she managed to hide all of the ugly. When the electricity was cut, she quickly adapted, and got us to do the same. How fast can you get something out of the fridge without releasing the cold air? Reading by candlelight is way more romantic, anyway. Monopoly beats watching TV, any day. Even when the heat and water were gone, no one seemed to mind. While we were busy making a game out of everything, my siblings and I knew how hard our mother was working to keep everything from falling apart. It was her dedication to us that never gave us a reason to complain.

Eventually there was nothing more to cut and our little apartment was ours no more. Soon, home became whatever couch, trailer, or guest-room floor was available for a few nights. Our favorite was the trailer because there was a raccoon that slept in an abandoned shed nearby. We named him Jerry and theoretically adopted him as our pet. Anytime it was about to feel like too much, like we’d reached the brink of our optimism, my mother would bear that weight for us and things were all right again. In this time, as we shifted from floors to couches to trailers, the words “homeless” or “broke” never emerged. Despite our circumstances and the hurdles placed in our lives by unforeseen forces, my mother never put the word “victim” into our vocabulary. As my mother continued to work hard in her own way, I struggled to contribute. School became my escape route from the cycle of poverty, dropouts, and teen pregnancies that persisted in my family. Neither of my parents graduated from college and only one finished high school. The other had to begin raising me during her senior year of high school. From the start, no one really expected much of me. I was just another Puerto Rican teen baby from the demonized city of Springfield. If I didn’t do well in school, no one would have blamed me. But because I saw the greatness in my mother that other people tried to claim wasn’t there, I found my motivation for working hard — for getting out.