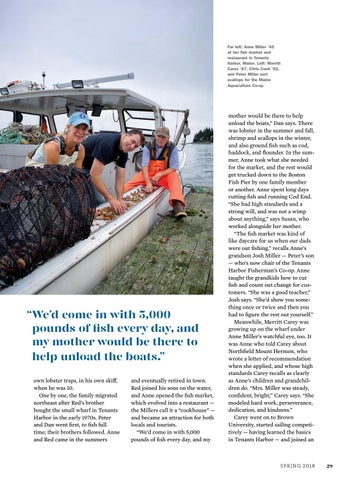 “ We’d come in with 5,000 pounds of fish every day, and my mother would be there to help unload the boats.” own lobster traps, in his own skiff, when he was 10. One by one, the family migrated northeast after Red’s brother bought the small wharf in Tenants Harbor in the early 1970s. Peter and Dan went first, to fish full time; their brothers followed. Anne and Red came in the summers

and eventually retired in town. Red joined his sons on the water, and Anne opened the fish market, which evolved into a restaurant — the Millers call it a “cookhouse” — and became an attraction for both locals and tourists. “We’d come in with 5,000 pounds of fish every day, and my

mother would be there to help unload the boats,” Dan says. There was lobster in the summer and fall, shrimp and scallops in the winter, and also ground fish such as cod, haddock, and flounder. In the summer, Anne took what she needed for the market, and the rest would get trucked down to the Boston Fish Pier by one family member or another. Anne spent long days cutting fish and running Cod End. “She had high standards and a strong will, and was not a wimp about anything,” says Susan, who worked alongside her mother. “The fish market was kind of like daycare for us when our dads were out fishing,” recalls Anne’s grandson Josh Miller — Peter’s son — who’s now chair of the Tenants Harbor Fisherman’s Co-op. Anne taught the grandkids how to cut fish and count out change for customers. “She was a good teacher,” Josh says. “She’d show you something once or twice and then you had to figure the rest out yourself.” Meanwhile, Merritt Carey was growing up on the wharf under Anne Miller’s watchful eye, too. It was Anne who told Carey about Northfield Mount Hermon, who wrote a letter of recommendation when she applied, and whose high standards Carey recalls as clearly as Anne’s children and grandchildren do. “Mrs. Miller was steady, confident, bright,” Carey says. “She modeled hard work, perseverance, dedication, and kindness.” Carey went on to Brown University, started sailing competitively — having learned the basics in Tenants Harbor — and joined an