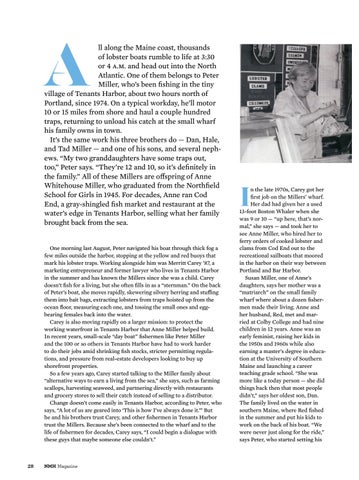 ll along the Maine coast, thousands of lobster boats rumble to life at 3:30 or 4 a.m. and head out into the North Atlantic. One of them belongs to Peter Miller, who’s been fishing in the tiny village of Tenants Harbor, about two hours north of Portland, since 1974. On a typical workday, he’ll motor 10 or 15 miles from shore and haul a couple hundred traps, returning to unload his catch at the small wharf his family owns in town. It’s the same work his three brothers do — Dan, Hale, and Tad Miller — and one of his sons, and several nephews. “My two granddaughters have some traps out, too,” Peter says. “They’re 12 and 10, so it’s definitely in the family.” All of these Millers are offspring of Anne Whitehouse Miller, who graduated from the Northfield School for Girls in 1945. For decades, Anne ran Cod End, a gray-shingled fish market and restaurant at the water’s edge in Tenants Harbor, selling what her family brought back from the sea. One morning last August, Peter navigated his boat through thick fog a few miles outside the harbor, stopping at the yellow and red buoys that mark his lobster traps. Working alongside him was Merritt Carey ’87, a marketing entrepreneur and former lawyer who lives in Tenants Harbor in the summer and has known the Millers since she was a child. Carey doesn’t fish for a living, but she often fills in as a “sternman.” On the back of Peter’s boat, she moves rapidly, skewering silvery herring and stuffing them into bait bags, extracting lobsters from traps hoisted up from the ocean floor, measuring each one, and tossing the small ones and eggbearing females back into the water. Carey is also moving rapidly on a larger mission: to protect the working waterfront in Tenants Harbor that Anne Miller helped build. In recent years, small-scale “day boat” fishermen like Peter Miller and the 100 or so others in Tenants Harbor have had to work harder to do their jobs amid shrinking fish stocks, stricter permitting regulations, and pressure from real-estate developers looking to buy up shorefront properties. So a few years ago, Carey started talking to the Miller family about “alternative ways to earn a living from the sea,” she says, such as farming scallops, harvesting seaweed, and partnering directly with restaurants and grocery stores to sell their catch instead of selling to a distributor. Change doesn’t come easily in Tenants Harbor, according to Peter, who says, “A lot of us are geared into ‘This is how I’ve always done it.’” But he and his brothers trust Carey, and other fishermen in Tenants Harbor trust the Millers. Because she’s been connected to the wharf and to the life of fishermen for decades, Carey says, “I could begin a dialogue with these guys that maybe someone else couldn’t.”

n the late 1970s, Carey got her first job on the Millers’ wharf. Her dad had given her a used 13-foot Boston Whaler when she was 9 or 10 — “up here, that’s normal,” she says — and took her to see Anne Miller, who hired her to ferry orders of cooked lobster and clams from Cod End out to the recreational sailboats that moored in the harbor on their way between Portland and Bar Harbor. Susan Miller, one of Anne’s daughters, says her mother was a “matriarch” on the small family wharf where about a dozen fishermen made their living. Anne and her husband, Red, met and married at Colby College and had nine children in 12 years. Anne was an early feminist, raising her kids in the 1950s and 1960s while also earning a master’s degree in education at the University of Southern Maine and launching a career teaching grade school. “She was more like a today person — she did things back then that most people didn’t,” says her oldest son, Dan. The family lived on the water in southern Maine, where Red fished in the summer and put his kids to work on the back of his boat. “We were never just along for the ride,” says Peter, who started setting his