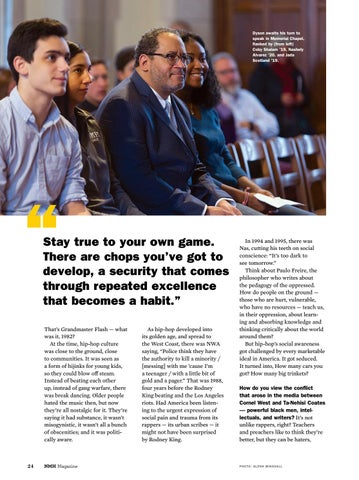 Dyson awaits his turn to speak in Memorial Chapel, flanked by (from left) Coby Shalam ’19, Nashely Alvarez ’20, and Jada Scotland ’19.

Stay true to your own game. There are chops you’ve got to develop, a security that comes through repeated excellence that becomes a habit.” That’s Grandmaster Flash — what was it, 1982? At the time, hip-hop culture was close to the ground, close to communities. It was seen as a form of hijinks for young kids, so they could blow off steam. Instead of beating each other up, instead of gang warfare, there was break dancing. Older people hated the music then, but now they’re all nostalgic for it. They’re saying it had substance, it wasn’t misogynistic, it wasn’t all a bunch of obscenities; and it was politically aware.

As hip-hop developed into its golden age, and spread to the West Coast, there was NWA saying, “Police think they have the authority to kill a minority / [messing] with me ’cause I’m a teenager / with a little bit of gold and a pager.” That was 1988, four years before the Rodney King beating and the Los Angeles riots. Had America been listening to the urgent expression of social pain and trauma from its rappers — its urban scribes — it might not have been surprised by Rodney King.

In 1994 and 1995, there was Nas, cutting his teeth on social conscience: “It’s too dark to see tomorrow.” Think about Paulo Freire, the philosopher who writes about the pedagogy of the oppressed. How do people on the ground — those who are hurt, vulnerable, who have no resources — teach us, in their oppression, about learning and absorbing knowledge and thinking critically about the world around them? But hip-hop’s social awareness got challenged by every marketable ideal in America. It got seduced. It turned into, How many cars you got? How many big trinkets? How do you view the conflict that arose in the media between Cornel West and Ta-Nehisi Coates — powerful black men, intellectuals, and writers? It’s not unlike rappers, right? Teachers and preachers like to think they’re better, but they can be haters,