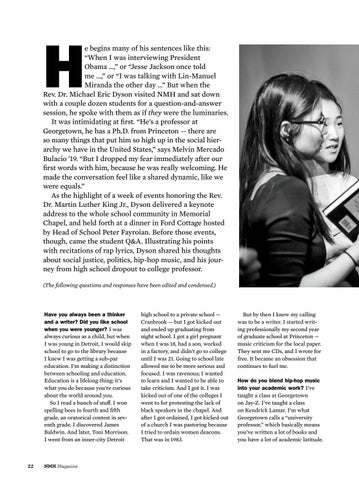 e begins many of his sentences like this: “When I was interviewing President Obama …,” or “Jesse Jackson once told me …,” or “I was talking with Lin-Manuel Miranda the other day …” But when the Rev. Dr. Michael Eric Dyson visited NMH and sat down with a couple dozen students for a question-and-answer session, he spoke with them as if they were the luminaries. It was intimidating at first. “He’s a professor at Georgetown, he has a Ph.D. from Princeton — there are so many things that put him so high up in the social hierarchy we have in the United States,” says Melvin Mercado Bulacio ’19. “But I dropped my fear immediately after our first words with him, because he was really welcoming. He made the conversation feel like a shared dynamic, like we were equals.” As the highlight of a week of events honoring the Rev. Dr. Martin Luther King Jr., Dyson delivered a keynote address to the whole school community in Memorial Chapel, and held forth at a dinner in Ford Cottage hosted by Head of School Peter Fayroian. Before those events, though, came the student Q&amp;A. Illustrating his points with recitations of rap lyrics, Dyson shared his thoughts about social justice, politics, hip-hop music, and his journey from high school dropout to college professor. (The following questions and responses have been edited and condensed.)

Have you always been a thinker and a writer? Did you like school when you were younger? I was always curious as a child, but when I was young in Detroit, I would skip school to go to the library because I knew I was getting a sub-par education. I’m making a distinction between schooling and education. Education is a lifelong thing; it’s what you do because you’re curious about the world around you. So I read a bunch of stuff. I won spelling bees in fourth and fifth grade, an oratorical contest in seventh grade. I discovered James Baldwin. And later, Toni Morrison. I went from an inner-city Detroit

high school to a private school — Cranbrook — but I got kicked out and ended up graduating from night school. I got a girl pregnant when I was 18, had a son, worked in a factory, and didn’t go to college until I was 21. Going to school late allowed me to be more serious and focused. I was ravenous; I wanted to learn and I wanted to be able to take criticism. And I got it. I was kicked out of one of the colleges I went to for protesting the lack of black speakers in the chapel. And after I got ordained, I got kicked out of a church I was pastoring because I tried to ordain women deacons. That was in 1983.

But by then I knew my calling was to be a writer. I started writing professionally my second year of graduate school at Princeton — music criticism for the local paper. They sent me CDs, and I wrote for free. It became an obsession that continues to fuel me. How do you blend hip-hop music into your academic work? I’ve taught a class at Georgetown on Jay-Z. I’ve taught a class on Kendrick Lamar. I’m what Georgetown calls a “university professor,” which basically means you’ve written a lot of books and you have a lot of academic latitude.