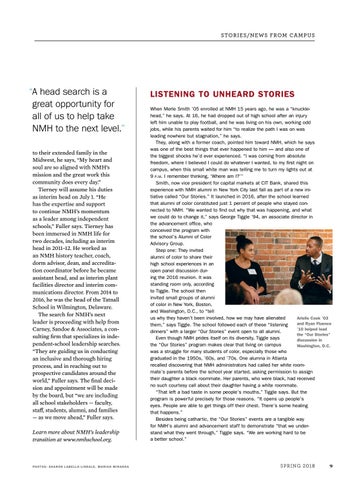 STORIES/N EWS FROM CAM P US

“ A head search is a great opportunity for all of us to help take NMH to the next level.” to their extended family in the Midwest, he says, “My heart and soul are so aligned with NMH’s mission and the great work this community does every day.” Tierney will assume his duties as interim head on July 1. “He has the expertise and support to continue NMH’s momentum as a leader among independent schools,” Fuller says. Tierney has been immersed in NMH life for two decades, including as interim head in 2011–12. He worked as an NMH history teacher, coach, dorm advisor, dean, and accreditation coordinator before he became assistant head, and as interim plant facilities director and interim communications director. From 2014 to 2016, he was the head of the Tatnall School in Wilmington, Delaware. The search for NMH’s next leader is proceeding with help from Carney, Sandoe &amp; Associates, a consulting firm that specializes in independent-school leadership searches. “They are guiding us in conducting an inclusive and thorough hiring process, and in reaching out to prospective candidates around the world,” Fuller says. The final decision and appointment will be made by the board, but “we are including all school stakeholders — faculty, staff, students, alumni, and families — as we move ahead,” Fuller says. Learn more about NMH’s leadership transition at www.nmhschool.org.

LISTENING TO UNHEARD STORIES When Merle Smith ’05 enrolled at NMH 15 years ago, he was a “knucklehead,” he says. At 16, he had dropped out of high school after an injury left him unable to play football, and he was living on his own, working odd jobs, while his parents waited for him “to realize the path I was on was leading nowhere but stagnation,” he says. They, along with a former coach, pointed him toward NMH, which he says was one of the best things that ever happened to him — and also one of the biggest shocks he’d ever experienced. “I was coming from absolute freedom, where I believed I could do whatever I wanted, to my first night on campus, when this small white man was telling me to turn my lights out at 9 p.m. I remember thinking, ‘Where am I?’” Smith, now vice president for capital markets at CIT Bank, shared this experience with NMH alumni in New York City last fall as part of a new initiative called “Our Stories.” It launched in 2016, after the school learned that alumni of color constituted just 1 percent of people who stayed connected to NMH. “We wanted to find out why that was happening, and what we could do to change it,” says George Tiggle ’94, an associate director in the advancement office, who conceived the program with the school’s Alumni of Color Advisory Group. Step one: They invited alumni of color to share their high school experiences in an open panel discussion during the 2016 reunion. It was standing room only, according to Tiggle. The school then invited small groups of alumni of color in New York, Boston, and Washington, D.C., to “tell us why they haven’t been involved, how we may have alienated Arielle Cook ’03 and Ryan Fluence them,” says Tiggle. The school followed each of these “listening ’10 helped lead dinners” with a larger “Our Stories” event open to all alumni. the “Our Stories” Even though NMH prides itself on its diversity, Tiggle says discussion in the “Our Stories” program makes clear that living on campus Washington, D.C. was a struggle for many students of color, especially those who graduated in the 1950s, ’60s, and ’70s. One alumna in Atlanta recalled discovering that NMH administrators had called her white roommate’s parents before the school year started, asking permission to assign their daughter a black roommate. Her parents, who were black, had received no such courtesy call about their daughter having a white roommate. “That left a bad taste in some people’s mouths,” Tiggle says. But the program is powerful precisely for those reasons. “It opens up people’s eyes. People are able to get things off their chest. There’s some healing that happens.” Besides being cathartic, the “Our Stories” events are a tangible way for NMH’s alumni and advancement staff to demonstrate “that we understand what they went through,” Tiggle says. “We are working hard to be a better school.”