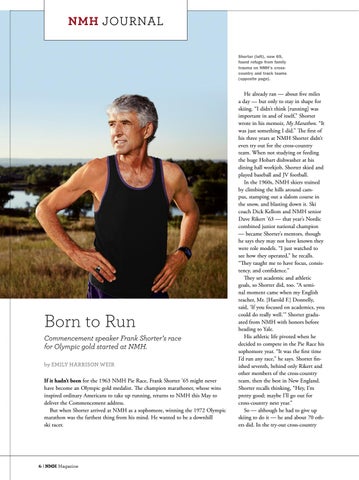 If it hadn’t been for the 1963 NMH Pie Race, Frank Shorter ’65 might never have become an Olympic gold medalist. The champion marathoner, whose wins inspired ordinary Americans to take up running, returns to NMH this May to deliver the Commencement address. But when Shorter arrived at NMH as a sophomore, winning the 1972 Olympic marathon was the farthest thing from his mind. He wanted to be a downhill ski racer.

He already ran — about five miles a day — but only to stay in shape for skiing. “I didn’t think [running] was important in and of itself,” Shorter wrote in his memoir, My Marathon. “It was just something I did.” The first of his three years at NMH Shorter didn’t even try out for the cross-country team. When not studying or feeding the huge Hobart dishwasher at his dining hall workjob, Shorter skied and played baseball and JV football. In the 1960s, NMH skiers trained by climbing the hills around campus, stamping out a slalom course in the snow, and blasting down it. Ski coach Dick Kellom and NMH senior Dave Rikert ’63 — that year’s Nordic combined junior national champion — became Shorter’s mentors, though he says they may not have known they were role models. “I just watched to see how they operated,” he recalls. “They taught me to have focus, consistency, and confidence.” They set academic and athletic goals, so Shorter did, too. “A seminal moment came when my English teacher, Mr. [Harold F.] Donnelly, said, ‘If you focused on academics, you could do really well.’” Shorter graduated from NMH with honors before heading to Yale. His athletic life pivoted when he decided to compete in the Pie Race his sophomore year. “It was the first time I’d run any race,” he says. Shorter finished seventh, behind only Rikert and other members of the cross-country team, then the best in New England. Shorter recalls thinking, “Hey, I’m pretty good; maybe I’ll go out for cross-country next year.” So — although he had to give up skiing to do it — he and about 70 others did. In the try-out cross-country