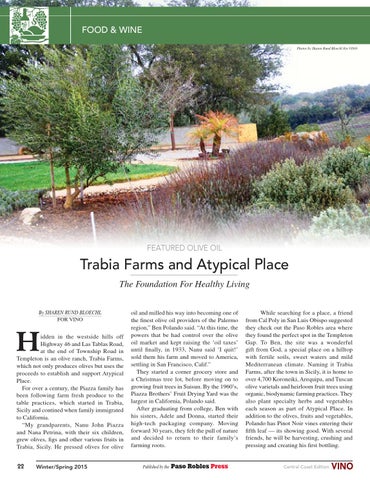 idden in the westside hills off Highway 46 and Las Tablas Road, at the end of Township Road in Templeton is an olive ranch, Trabia Farms, which not only produces olives but uses the proceeds to establish and support Atypical Place. For over a century, the Piazza family has been following farm fresh produce to the table practices, which started in Trabia, Sicily and contined when family immigrated to California. “My grandparents, Nanu John Piazza and Nana Petrina, with their six children, grew olives, figs and other various fruits in Trabia, Sicily. He pressed olives for olive

oil and milled his way into becoming one of the finest olive oil providers of the Palermo region,” Ben Polando said. “At this time, the powers that be had control over the olive oil market and kept raising the ‘oil taxes’ until finally, in 1933, Nanu said ‘I quit!’ sold them his farm and moved to America, settling in San Francisco, Calif.” They started a corner grocery store and a Christmas tree lot, before moving on to growing fruit trees in Suisun. By the 1960’s, Piazza Brothers’ Fruit Drying Yard was the largest in California, Polando said. After graduating from college, Ben with his sisters, Adele and Donna, started their high-tech packaging company. Moving forward 30 years, they felt the pull of nature and decided to return to their family’s farming roots.

While searching for a place, a friend from Cal Poly in San Luis Obispo suggested they check out the Paso Robles area where they found the perfect spot in the Templeton Gap. To Ben, the site was a wonderful gift from God, a special place on a hilltop with fertile soils, sweet waters and mild Mediterranean climate. Naming it Trabia Farms, after the town in Sicily, it is home to over 4,700 Koroneiki, Arequipa, and Tuscan olive varietals and heirloom fruit trees using organic, biodynamic farming practices. They also plant specialty herbs and vegetables each season as part of Atypical Place. In addition to the olives, fruits and vegetables, Polando has Pinot Noir vines entering their fifth leaf — its showing good. With several friends, he will be harvesting, crushing and pressing and creating his first bottling. 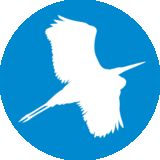