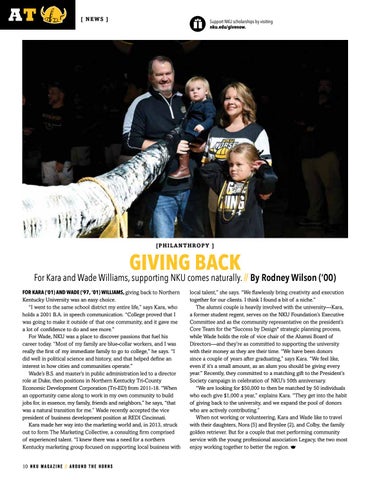 For Kara and Wade Williams, supporting NKU comes naturally. // By Rodney Wilson (’00) FOR KARA (’01) AND WADE (’97, ’01) WILLIAMS, giving back to Northern Kentucky University was an easy choice. “I went to the same school district my entire life,” says Kara, who holds a 2001 B.A. in speech communication. “College proved that I was going to make it outside of that one community, and it gave me a lot of confidence to do and see more.” For Wade, NKU was a place to discover passions that fuel his career today. “Most of my family are blue-collar workers, and I was really the first of my immediate family to go to college,” he says. “I did well in political science and history, and that helped define an interest in how cities and communities operate.” Wade’s B.S. and master’s in public administration led to a director role at Duke, then positions in Northern Kentucky Tri-County Economic Development Corporation (Tri-ED) from 2011-18. “When an opportunity came along to work in my own community to build jobs for, in essence, my family, friends and neighbors,” he says, “that was a natural transition for me.” Wade recently accepted the vice president of business development position at REDI Cincinnati. Kara made her way into the marketing world and, in 2013, struck out to form The Marketing Collective, a consulting firm comprised of experienced talent. “I knew there was a need for a northern Kentucky marketing group focused on supporting local business with 10 n k u m A G A Z I N E // a r o u n d t h e h o r n s

local talent,” she says. “We flawlessly bring creativity and execution together for our clients. I think I found a bit of a niche.” The alumni couple is heavily involved with the university—Kara, a former student regent, serves on the NKU Foundation’s Executive Committee and as the community representative on the president’s Core Team for the "Success by Design" strategic planning process, while Wade holds the role of vice chair of the Alumni Board of Directors—and they’re as committed to supporting the university with their money as they are their time. “We have been donors since a couple of years after graduating,” says Kara. “We feel like, even if it’s a small amount, as an alum you should be giving every year.” Recently, they committed to a matching gift to the President’s Society campaign in celebration of NKU’s 50th anniversary. “We are looking for $50,000 to then be matched by 50 individuals who each give $1,000 a year,” explains Kara. “They get into the habit of giving back to the university, and we expand the pool of donors who are actively contributing.” When not working or volunteering, Kara and Wade like to travel with their daughters, Nora (5) and Brynlee (2), and Colby, the family golden retriever. But for a couple that met performing community service with the young professional association Legacy, the two most enjoy working together to better the region. 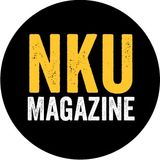